We can’t complain about the amount of water in the system during October, the rain finally arrived. Fairly steady sport reported on the Leven, mainly on the upper reaches. 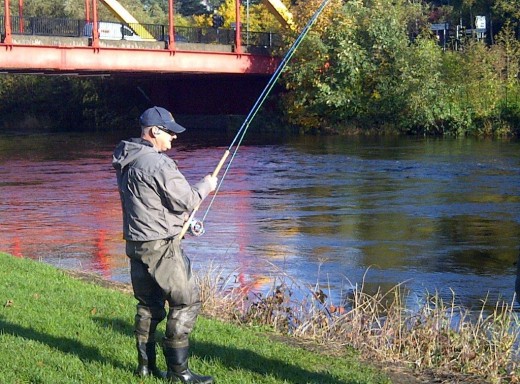 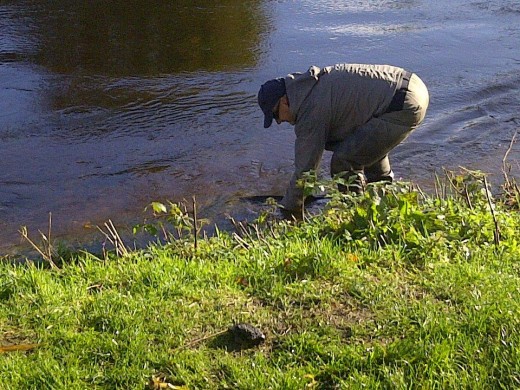 Safely returning his catch, Ian landed a second salmon at the Pool and a third at the Piles. On Friday 25th, Alec McElwee landed three salmon, bringing his total in the last couple of weeks to five. 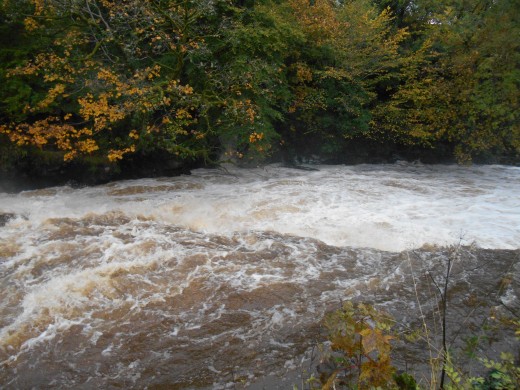 With good spate conditions during October, some members enjoyed great back end sport. 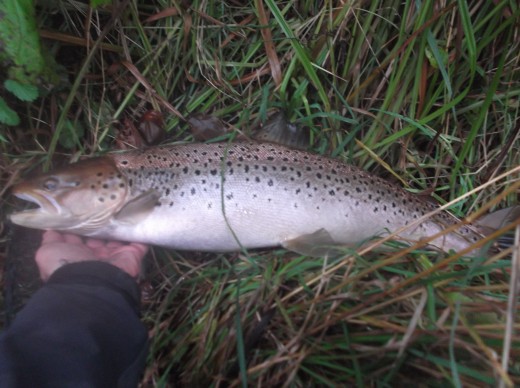 On 17th, Malcolm MacCormick netted three salmon and this plump (5lb) sea trout, all up in the Cowdenmill  area. 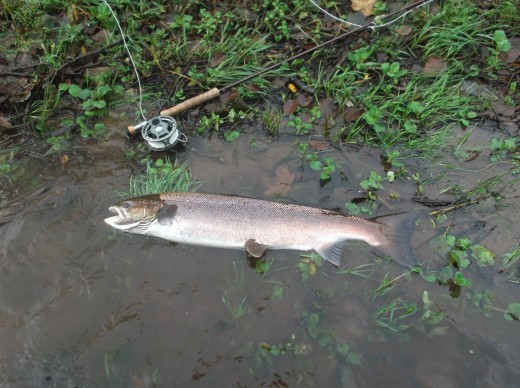 Malky tells us that he lost a fourth salmon, in double figures, with most of the action happening just before the light faded.

The 21st of October was one of those unforgettable days for Euan McGrandle. Fishing the top end of the river he connected with eight salmon, landing five. Once again the river seemed to erupt just at dusk. Euan reckons he also lost a double figure fish.

Russell Boyd sent us this report:

Loch Lomond Tuesday October 1st 2013
I had friends Innes & Pete out for a day’s fly fishing on the big loch. I was Ghillie for the day on the oars, with the hope of putting them over some eager taking fish and to show them some of the stunning scenery the Loch has to offer.
Conditions were good with a warm East wind and good cloud cover. The temperature of the loch was cooling down after the hot summer, so fish were starting to come to the surface to take a fly more freely. The first few drifts along the islands of Inchfad, Inchcruin and Inchmoan produced a small Sea Trout for Pete. Around lunchtime we decided to head further up the loch to Inchlonaig island.
We started the drift on the north east point of the island with the aim to cover the shore lies and off shore banks all along the north shoreline.
Innes was dapping and rose a Sea Trout straight away, however the fish failed to connect with the Daddy Longlegs. Pete then rose another Sea Trout on the fly, again failing to connect. Still a good sign that the fish were there and willing to come to the surface.
Colin McCrory and his boat partner Terry were fishing around 200 yards ahead of us, they pulled in for lunch on the beach midway along the island and took the shots of Pete playing the fish. The boat was drifting nicely when we approached the midpoint of the island, however was maybe a wee bit on the shallow side, so was pulled out slightly, to about 16 feet of water. 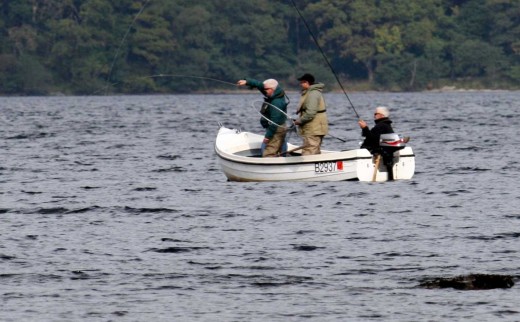 This Proved to be a good decision, as straight away Pete’s bob fly was seized close to the boat and a big Sea Trout immediately took a huge leap 2-3 feet clear of the water then immediately stripped Pete’s reel down to the backing. After gaining back some line, the fish then went on another run the opposite way, again stripping Pete’s reel down to the backing, with a big jump at the end of the run. 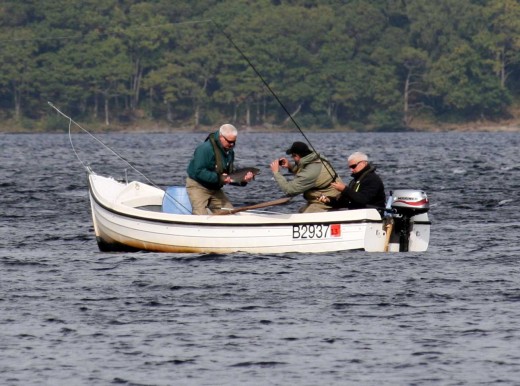 The fish then come close to the boat, and then decided to go under and round the back of the boat in order to gain its freedom. After 10 minutes of running Pete ragged, the net was finally slipped under a prime 8lbs Loch Lomond Sea Trout. 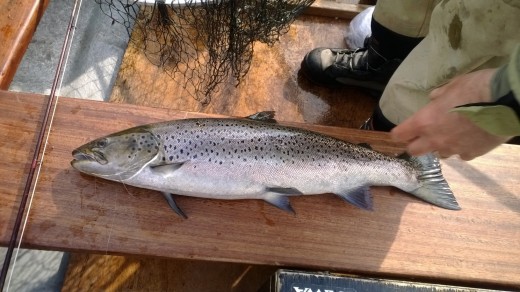 A few quick pictures were taken and the magnificent fish was the released to continue her journey. Pete was shaking and grinning like a Cheshire cat for a few hours afterwards. A personal best Sea Trout for him and on his first ever visit to Loch Lomond as well ! I think he’ll be back !

Thanks for that Russell.

Manadatory catch and release of all salmon and sea trout caught on the system during October was introduced this season. This policy has been well received by our members and ticket holders and we’d like to thank everyone for their contribution to the future of our stocks. A great beginning!

And so ends another season on the Lomond system. A good year for some anglers, maybe not so good for others……but that’s always the way of it. One thing is for certain though, if you’re not out there….. you’ve got no chance!

Catch returns are due before 31st December. These can now be made via the website. If you have any problems please contact us at web@lochlomondangling.com

Thanks to everyone who shared their days out with us. Good luck next season!