Quality salmon continue to come off the Leven

After the first fish was caught in mid March we didn’t have to wait long for the next few fish. On Saturday 4 April Robert Haining connected with the heaviest salmon to come off the Lomond system so far this year when he tempted a fresh run 20lb fish while fishing a floating yellow belly devon at the Stuckie Bridge.

On Easter Monday, 6 April, Derek Hughes caught a cracking fresh salmon with long tailed lice estimated to have weighted between 17 and 18lb while fishing the fly at the Piles. The fish was duly returned to do its thing for the system after a quick photograph – congratulations and well done Derek: 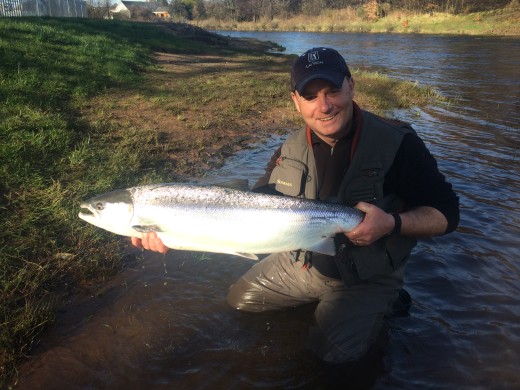 Despite the quality of fish that are around angling pressure is still reasonably light. Some of those who have ventured forth have began to encounter fresh run sea trout with several fish being taken up to the 3lb mark.

The medium range weather forecast from the middle of this week for the next 7 days or so is for dry conditions and although the river is still at a good height there is every chance that the gates will be raised sometime next week for the first time this year. Last year when the gates were raised our bailiffs and others were on hand to witness a stranding of newly hatched fish due to the river level having been dropped too quickly. We will be watching carefully this year and will be on hand to record what happens when the gates are finally raised. If you are around when the water drops and come across signs of stranded fish please take a photographic record and ensure that this is passed on to the Committee.

As some of you might be aware the Black Lynn fishings were sold as part of a larger lot last year. It is with real pleasure that the Committee are able to confirm that we have retained the fishings on this popular section of water which stretch from the Balfron Bridge to the LLAIA owned Wilson’s stretch.

On Sunday 22 March the first smolt trap was installed on the River Endrick and not content with that the willing volunteers headed to our annual spring clean on the Endrick. In all 18 people, members and non-members alike, tackled a variety of stretches from Fintry downstream to the Honeyholm Bridge. Later on that day our volunteers attended the Wilson’s stretch and after a lot of hard graft have ensured that members now have unrestricted access to the top half of the beat. 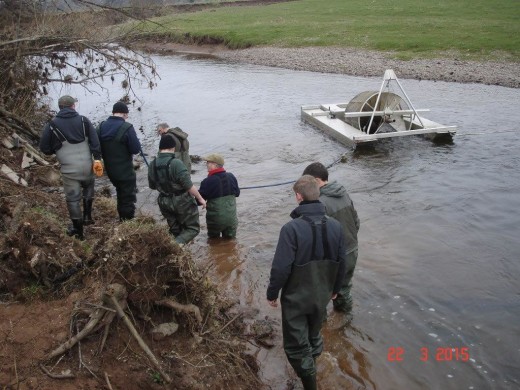 On behalf of the Committee we would just like to offer a big thank you to all who helped out on what was an extremely busy day.

The importance of the Estuary to the health of our system cannot be underestimated and this year has seen a lot more bailiffing activity along the shore. It is encouraging to note that with one exception every angler who has been approached of late has had written permission to fish. We will continue to keep a close eye on this fishery particularly now that sea trout catches are beginning to pick up.

Loch Lomond
Springers and others off the Loch

With fish being landed on the Leven it was only a matter of time before the early Loch anglers began to connect. The first fish caught on the Loch that we know off was landed on 6 April by Jack O’Mailey, while fishing off Aldochly. It weighed about 12lb and was safely returned. We believe a further 2 fish have since been caught but details are as yet a bit sketchy and we will update in due course. Fresh sea trout are also being caught on the troll the best we have heard of was a sea liced 6lb fish caught by Rab Strachan with Scott Sinclair also returning a nice trout of about 3 to 4lb. 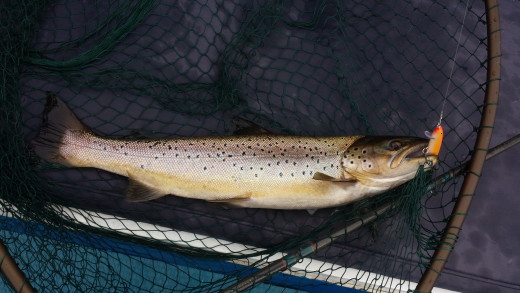 As we all know the Loch is not just about game fish there are specimen coarse fish out there as well, in particular pike. As we approach the spawning period some big pike are regularly recorded as a by catch of anglers fishing for salmon with Paul Dorrian reporting a really impressive 25lb fish recently. But what about the specialist pike angler fishing dead baits well the odd unexpected fish can turn up. No more so than the one caught by Jim Laughlin at Cameron House Marina in late March as this photo will testify: 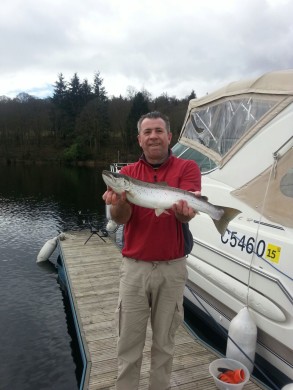 The fish which was safely returned was estimated to weight between 10 and 12lb and Carolyn Bryce the Loch Lomond Fisheries Trust biologist has confirmed that it is a sea trout. Interestingly this is not the first recorded migratory fish taken on dead bait. We can confirm that a number of escaped farmed salmon were taken on dead baits on the Loch about 10 years ago and a grilse was taken about 5 years ago by a member fishing for pike with such a bait in the lower Endrick. Thanks for the report and the photo Jim it will take a bit of beating in the unusual fish category!