Book launch – Angling on Loch Lomond and its Rivers

Book launch – Angling on Loch Lomond and its Rivers

We are delighted to announce the launch of a new book on angling on the Lomond system written by one of our long time members Dick Dickson….

‘Dick Dickson has fished throughout Scotland but for the past 40 years has spent most of his fishing time on Loch Lomond and it’s rivers. Since retiring he has been the angling columnist for the Lennox Herald,  West Dunbartonshire’s best selling local newspaper. His ‘Angling Angle’ column has been published weekly during each fishing season for seven years, with in excess of 200 articles written about fishing in the Lomond system. Dick also contributes monthly to the national ‘Trout and Salmon Magazine’, with reports about the fishing on Lomond and its rivers.’

Many anglers will own or have read the volumes written by Henry Lamond, Ian Wood and Bill Mc Ewan published over the years, all dedicated to fishing the Big Loch’. Dick brings us right up to date and takes things a few steps further, covering the system’s rivers, the Leven, Endrick and the Fruin. 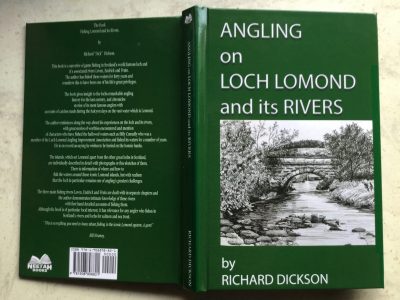 ‘Angling on Loch Lomond and its Rivers’  will be officially launched towards the end of May and we’ll keep you updated on dates/venues/signings.

We wish Dick every success and look forward to a ‘right good read’ and the benefit of his experience.