Due to the continuing drought the barrage is now operating at summer low with weekend freshets. Frequent showers in this week’s forecast but we need a period of prolonged heavy rain to make any real difference. However we know that despite low water, salmon will still run the six miles of the Leven to the sanctuary of the Loch, so there’s always a chance of sport. 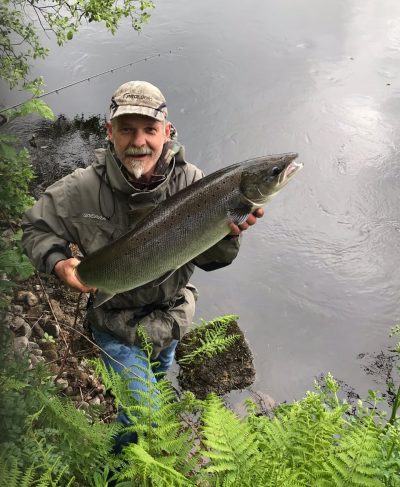 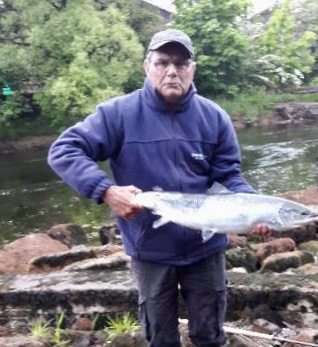 Saturdays rainfall caused a 2” rise in height, which was enough to encourage fresh fish into the system. While everyone was watching the Cup Final,  Chic McLean stayed out on the river and ‘scored a goal’ by landing this fresh springer (13lbs) at  Ritchies Lade on the fly. A ‘trophy’ photo and quickly returned.

Anglers on the Estuary and lower reaches of the Leven still having good sport with sea trout in the 3-5lbs range. Levengrove, Havoc and Cardross areas all producing with some heavier specimens landed at Ardmore. 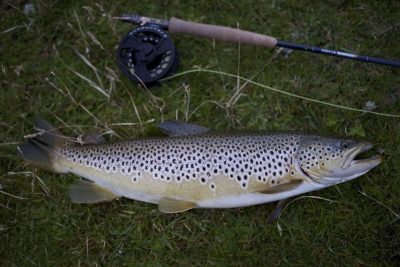 Earlier in the month Nathan Munro fished the bottom end of the river and landed this cracker of a brownie on the fly.

The Loch is now at it’s lowest level for  years, so care is required when navigating. Big rocks that would normally be well submerged are looming just under the surface. ‘Landmarks’ like the Lucky Chuckie and the crannogs at Strathcashel and Mill o Ross are sitting high and dry. Balmaha and the Endrick Bank resemble Blackpool beach, while large boulders around the Aber Isle are exposed showing how dangerous that area is.

With the Loch at its current level there’s some speculation that salmon entering the Loch won’t remain in the southern basin for long and instead head for ‘high water’ up the Tap End. The author recently lost a heavy fish at Ptarmigan Point ‘with a tail like a shovel’ and Gerd Elsweiler reported losing a grilse of 6/7lbs at Mill o Ross the same day. The northern end of the Loch has been fairly quiet for a few years but perhaps things will be different this season, we can only hope.

One of the main talking points among Loch anglers is the numbers of fresh sea trout being caught. There are concentrations of trout off the Cashel shoreline, north side of Lonaig and Ross Isles area. Last week one angler had six in the boat all fresh run and over 3lbs in weight. 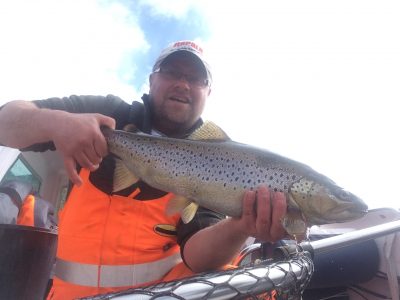 With the nationwide shortage of salmon we can’t expect the great catches of the past. The Atlantic Salmon Trust’s ‘Missing Salmon’ project, is now underway and should provide some further answers to the problem. 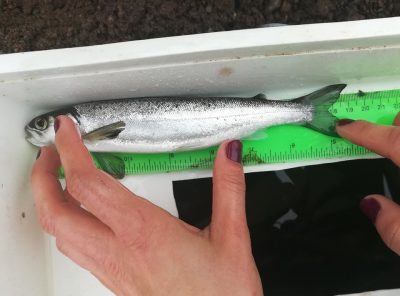 The Loch Lomond Fisheries Trust report that the results from their rotary smolt trap this year are probably the best since the project began. The trap was deployed in April and in one 24hour period alone 124 salmon smolts entered. Since then good numbers of salmon and sea trout smolts have been recorded and the migration still continues with rain at the weekend flushing down more. Bearing in mind that the smolt trap  only catches a small percentage of migrating fish this is excellent news.

Over the past two seasons the committee have been able to consolidate the Association’s position and are now embarking on projects and research to improve the fishings, particularly the habitat for returning fish. The Leven and Endrick are fairly well served so we are currently engaging with SCENE at Rowardennan looking at lochside spawning burns. The initial focus is on a stream in the Rowardennan area which was noted in the past as a prominent salmon and sea trout spawning water, however in recent years there seems to have been very little activity. Once a survey has been completed a remedy will be decided. It may be as simple as removal of obstructions or could require regeneration through limited stocking. As far a we know  these burns have not been looked at for years so it’ll be interesting to see what we find and the difference that can be made.

Members who haven’t renewed yet are reminded as per para 7c of the LLAIA Constitution:

Our Treasurer will be delighted to hear from you…..

This year’s Pike Fly fishing Competition on Loch Lomond will be held on Sunday 9 June between 0900hrs and 1700hrs.

The event will be based at Balmaha boatyard and boat, kayak and bank anglers may take part. A registration fee of £5 is payable on the day at Balmaha between 0800hs and 0900hrs or in advance at Glasgow Angling Centre. All competitors must be in possession of a valid permit. Proceeds will be donated to the Loch Lomond Rescue Boat.

For full details and rules see our 9th of June update.

The official launch of Dick Dickson’s book ‘ Angling on Loch Lomond and its Rivers’ took place at Voldac on Thursday 23 May. The event was well attended and Dick’s wrist must be sore after signing so many copies. It will soon be available at some of our permit outlets and good book shops but can be ordered online at: http://fishinglomond.co.uk/home/4594601464