On Tuesday (18 June) our water bailffs,  Robert and Sam, we on foot patrol near to Dalquhurn Point on the Leven when they heard the sounds of screaming coming from nearby. On investigating they saw a woman in the river struggling to keep afloat.

After quickly assessing the situation Robert entered the water eventually bringing her to the side where with Sam’s assistance she was lifted onto the bank. At this point she was seen to be lapsing in and out of consciousness. Fortunately the emergency services had already been alerted and shortly afterwards an ambulance arrived to convey her to hospital.

It seems that while cycling on the path the young lady had fallen from her bicycle, sustained a leg injury and fallen into the river. Bearing in mind that the barrage had been fully opened earlier in the day and the river level was well up, had it not been for Robert and Sam presence and quick actions, this incident may have had a more serious ending. 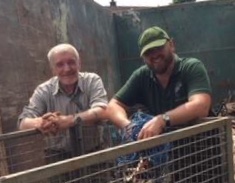 Our water bailiffs have a difficult job to do and seldom get any praise for their hard work but we think that you’ll agree that this was one occasion where they acted ‘above and beyond’……well done guys!! Robert (R) and Sam (L)