After what seemed like an agonisingly long period of lockdown, last week saw the removal of the suspension of angling on the Lomond System where Friday 29th May saw the system opening again to anglers. The re-opening of the system was and remains subject to all anglers following all Scottish Government guidelines and requirements concerning Covid-19.

The announcement that supported the lifting of the suspension was of course welcomed with joy and excitement by anglers who had been missing the chance to get out and cast a line for almost twelve weeks. Consequently there was a healthy turnout by anglers on the first day of returning to angling on both the Loch, River Leven and the estuary.

The lifting of the suspension saw a busy return to the banks last Friday with anglers impatient to get back to enjoying their sport and passion. So keen were some that they opted for some night fishing after midnight on Thursday 28th May.
It was not long at all before we were off and running as the Leven produced it’s first salmon – a lovely 9lb fish caught on the worm by Billy McFetridge at “The Burn“, well done Billy!
Reports of fish moving through the river have been frequent during the recent suspension period and despite the current lack of rain then fish appear to be continuing to run.

One for the coarse angler and somewhat unusual for the River Leven was a large 5lb bream caught on Thursday 4th June by angler James Granger on the worm at the top pool. The fish was played and landed by none other than one of own bailiffs Samuel McBrearty before being safely released. 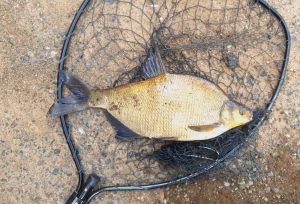 5lb Bream caught by James Granger at the Top Pool

Given the forecast for the next 2-3 days we are likely to see a small rise in water levels but could really benefit from some more sustained rain.

Loch Lomond also got off and running with new association member Jamie Hyslop landing a nice fresh fish of around 12lb on a toby on Saturday 30th May. Additionally not satisfied with the first Lomon salmon of the season Jimmy Hyslop went on this week to add to his tally with two further fish on Wednesday 3rd June of 11lb & 13lb and another on Thursday 4th June at 15lb so clearly he is “on fire”. Congratulations Jimmy. 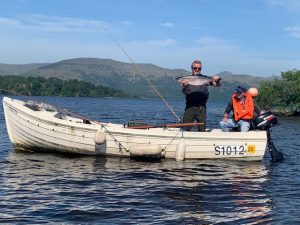 Jimmy Hyslop proudly showing his 13.5lb Salmon – The first of the 2020 season.

Further success was reported on Tuesday 2nd June for  Lomond angler James Cannon in landing a salmon of 8lbs at Net Bay (released). In fact Samuel Burgoyne and his son James Cannon reported that their rods had constant action throughout the day in fact with six or seven pike, some good sea tout, perch and a brown trout as well as some further strong runs that unfortunately failed to stay on. According to both anglers they were keen to say that this had been one of their best days “out on the big puddle” that they could recall. 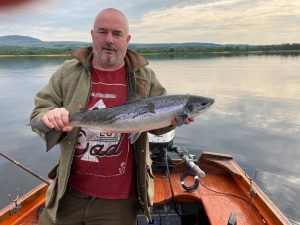 For other anglers there have been increasingly frequent reports of significant numbers of sea trout being caught with the majority being in the 2-3lb range but with some notably large sea trout being hooked.

So all in all a strong (2nd) start to the 2020 season on Lomond with the expectation that reports of further fish are highly likely during the course of the next weeks.

The removal of the recent suspension has seen a large numbers fishing and enjoying success on the estuary with good numbers of sea trout being reported for those anglers who have matched their trips to coincide with the correct tidal conditions.

So clearly a great (second) start to the 2020 season with initial catches providing reason for optimism for the remainder fo the season. We wish everyone the best of luck in their fishing exploits and respectfully ask that all anglers to observe best practice at all times in carefully netting, unhooking and releasing your prize fish.

We encourage all anglers to  share your tales, stories and photographs with us. In doing so we can recognise and share your successes with all of our members and visitors. Please therefore send your accounts, photographs and details by email to reports@lochlomondangling.com