There were fewer catches reported in the last week, most certainly due to the low water level, bright conditions and less anglers on the river.

However, on Wednesday 23 May, Stephen Gilfeather landed a 13lb salmon from the top pool and on Thurday 24th May, Scott MacFarlane successfully netted a 13lb springer from the same pool. Interestingly enough, both fish were also caught on the same type of lure, a black flying-c, which proves to be very popular on the river Leven throughout the season.

We could certainly do with a few days of heavy rainfall to freshen things up and get some movement going again.

There has definitely been a dramatic change in the weather. Hats, gloves and scarves one day and t-shirts and shorts the next. That cold east wind suddenly turned round to the south-west, bringing much more pleasant conditions for Loch fishers. Perhaps  too pleasant. While there were no reports of fish into Voldac, some Balmaha anglers, no doubt having packed the factor 30 and a few cold beers. 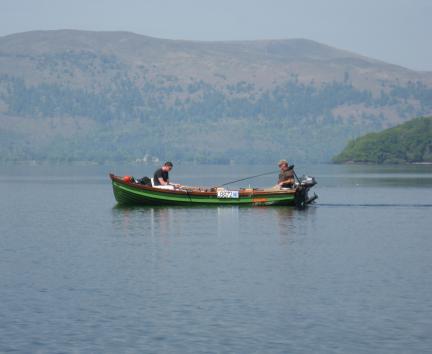 On Thursday 24th May, Ian Fraser and John Dawson set out from Balmaha and boated a 10lb spring salmon in Net Bay. The fish was taken on a blue/silver rapala on the troll.

Saturday 26th of May saw Euan McGrandle out on the Bank deploying his golden sprats. Euan swears by sprats, which produce fish for him most seasons. On this occasion he landed a 13lb salmon, lost a larger fish at the net and had a good run from a third fish. Euan makes no secret of his methods and has posted an excellent article on this website detailing preparation techniques and manufacture of mounts. Like everything else though, there is no substitute for experience.

Fish which have already moved into the loch will now take up residence until nearer the autumn, then moving to the rivers and burns. Many will move up into the colder areas of the Loch, most notably Rowchoish, which produces good catches every year, particularly when the grilse are about.

On Thursday 24th May, Chris Turner was presented with his reward of £40 in vouchers for Glasgow Angling Centre. 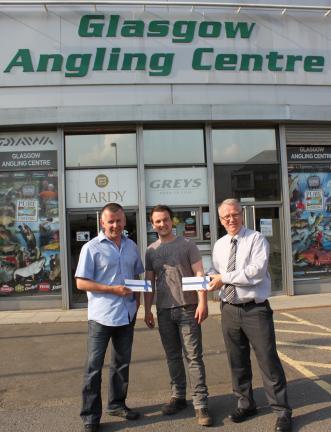 The presentation was made by Mr Paul Devlin (left), our partner in the Voluntary Catch and Release Scheme and Stewart Inglis (right), secretary LLAIA. Chris is the first angler to return a spring salmon under this scheme which has been extended until 15th of June.

The first phase of the Fruin clean up took place on Sunday 28th May. Despite the warm weather, fifteen volunteers carried out some first class work. A large blockage caused by fallen trees was cleared and two other similar blockages partially removed.

Work was also carried out on the path from the quarry to the Horseshoe. If anyone should catch a fish wearing a pair of polaroids, please return them to Jim Muir. 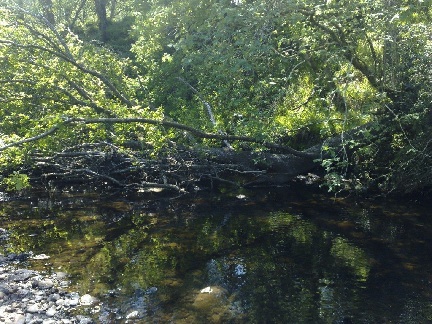 ……….and after. Our Chairman shows how it’s done.

Only one major blockage now remains and this will be tackled very soon. A clean up on the the River Endrick will commence in June.

EGM. The date for the Extra Ordinary Meeting of the Loch Lomond Angling Improvement Association has been announced. It will be held on Wednesday 13th of June 2012 In the Woodside Halls, Glasgow. Full details have been posted on the Committee’s Blog section of this website.