With just over 6 months of the season gone already and with only 11 weeks of the season left to go the Committee would like to take the opportunity to update you on the season to date and look forward to what we see as impacting on the club in the months to come.

The season started with very high water levels on the River Leven and the Loch and as a result fewer anglers than normal ventured forth in search of an elusive springer.  It was not until the th of April that Chic McLean managed to land the first fish off the system and at 20Lb it was a cracker and well worth the wait.  From then on the spring fishing picked up and while fish were not as plentiful as last year anglers on both the Leven and the Loch landed increasing numbers of salmon and as has been experienced in recent years the run ended in a final flurry in the first few weeks of June.

Since then water levels have been low and it has been sea trout fishing that has taken central stage with good fish being recorded from the Estuary, Leven and the Loch.  Fish have been caught in good numbers across all 3 fisheries and the Leven this year would appear to holding a good stock of finnock which bodes well for the future.

A few fish have also been taken from the Endrick but the lack of water since the Spring has meant that those anglers who fish the river have had little to get excited about.  Despite some of the most severe rainfall in the north and the east of the country in recent days there has been little rain in the Endrick catchment area and the river has struggled to reach a meter on the SEPA gauge.

Salmon have off course still been running the Leven and some clean specimens have been caught on the Loch and in the river, the most recent we have heard of was a liced fish from the top end of Lomond.  It is hoped that the rainfall forecast does appear in the catchment as we are desperately in need of water to bring in some fresh fish.

As you may be aware we are restricted in the maintenance work that can be done over the summer months in order to avoid disturbing nesting birds.  As we now approach the middle of August we are now once again in a position to tackle much needed bankside growth.  It is proposed that the first weekend of action will take place on the River Leven on Saturday 23rd and Sunday 24th of August.  We will commence the work by trimming the banks to the waters’ edge using a tractor and flail.  The Council have also been approached and have once again agreed to provide a skip, all we need are the volunteers.  As in previous years Scottish Water has been approached to alter the compensation flow so that anglers will have the extra water from Monday 25 August until Wednesday 27 August.  The initial meet will take place at 9am on Saturday 23rd at Bonhill Pool car park and all members and interested parties are encouraged to attend.

The next 2 maintenance events will take place over the following 2 weekends.  On Saturday 30th and Sunday 31st of August work will take place on the River Endrick, the meeting point will be Killearn Village Hall at 10am.  Clearance work will take place at Drumtain, Wilson’s, Cowdenmill and Coolies.  The following weekend, Saturday 6th September and Sunday 7th September, work will be undertaken on the Fruin with the meeting point at the Lower Fruin Car Park off the main Helensburgh Road at 10am.  Once again all members and interested parties are encouraged to attend. 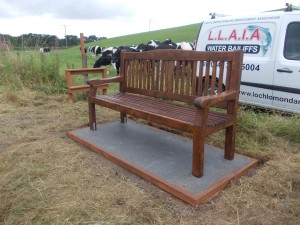 This summer the Committee took possession of 4 hand crafted benches which will be installed over the next few months.  The first has been located at the top pool on our Drumtain stretch and will be  dedicated to Malcolm Prestcott who was one of our best known and most consistent Endrick anglers.  The Committee are seeking suggestions as to where the other 3 benches could be situated and we would welcome opinions from members.

Over the course of the summer volunteers working with the Loch Lomond Fisheries Trust have been busy tackling invasive plant species such as Giant Hogweed, Himalayan Balsam and Japanese Knotweed on the River Blane.  This is the first leg of a marathon effort to control and eradicate these invasive species which not only threaten indigenous plant species but undermine whole sections of river bank.  The task is enormous and quite frankly more volunteers are required if we are to get to grips with this menace.

The second stage of our Merganser and Goosander survey will take place at the end of September.  It should take no longer than 4 hours and we require in the region of a dozen volunteers to walk the banks of the Endrick to count these birds which are predating on our juvenile fish.  It is hoped that with the evidence we have gathered we will be able to approach SNH for a licence to control these birds next year.  This piece of work is therefore essential and once again we will be calling on volunteers to offer a few hours of their time.

Finally, but by no means least, in October we expect Andrew Thin to produce his report on Wild Fisheries.  This is potentially the most important piece of work that has been conducted on wild fisheries in decades as it is believed that it will recommend a fundamental change to the way freshwater fisheries are managed, with a particular emphasis on migratory fisheries.

The LLAIA Committee has been involved in the consultation process, however, to what extent our suggestions and opinions were taken on board will only become apparent when the review is finally published.  There is every chance though that the review will lead to new national structures headed by a Fisheries Commissioner, which will in all likelihood have to be self financing, potentially leading to additional charges for anglers.  Conservation may also be high on the agenda, however, we will have to wait and see what scientific basis might be used to inform any proposed national measures.  Finally, future bailiffing arrangements may also come under scrutiny as might the Sunday close and protection orders.

All in all this could be a truly influential document and will invariably have a massive impact on the Association. We will write to you later in the year with our views once this document is published.