More water but for how long?

The gates on the River Leven were dropped on Thursday 30 April after a heavy period of rain and at this time the water is running at around 1.2m. With heavy rain forecast there is every chance that the Leven will be running high for all week. There is therefore every chance that there will be more fish off the river.
In the last period of high water a number of seal marked fish were recorded from both the river and the loch (see Lomond report below). One of the worst examples of attempted predation was seen on the 10.25 Lb fish caught on the fly (Posh Tosh) by Paul McNeil on 17 April at the Factory Wall. The ripped gill cover had nothing to do with where the fish was hooked but was a result of scarring from a recent attack by a seal. It is a wonder that the fish survived long enough to make it up river given the site of the injury and the amount of blood that it was losing when captured. 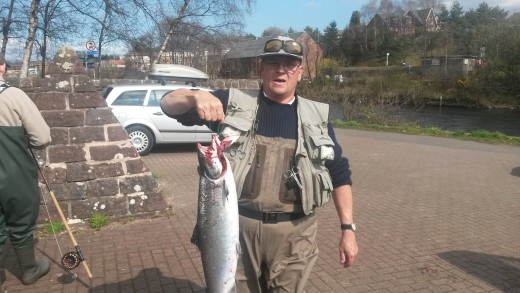 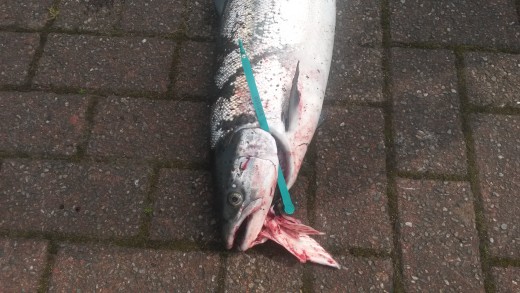 While the water was low a number of fresh sea trout of between 1– 2Lb were being encountered by anglers as well as some larger sea trout kelts heading in the opposite direction. Given that there are still kelts around ,even in May, is another reason why we insist on the use of circle hooks which almost invariably lead to the fish being securely hooked in the scissors
If anyone thought that you can only catch sea trout in low water conditions in the spring well think again. Leven regular John Paul Donnelly was fishing a small copper tube on 7Lb line at the double pipes in mid week low conditions when he hooked a larger than expected fish. Sometime later he landed a fresh 15 Lb salmon which after a bit of TLC was successfully returned. 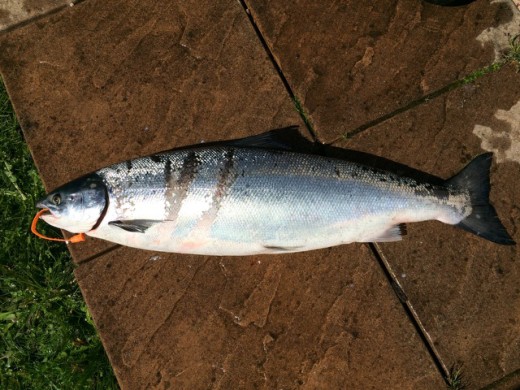 Other catches include this 11lb spring salmonon caught on 14th April Andy Casey taken a copper salmo at the Factory Wall. It also shows the scars of a recent seal attack. 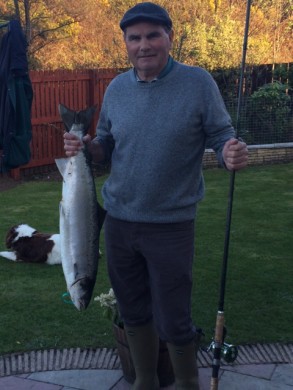 On 17th April Chic McLean landed his first salmon of the season at Managers on a flying-c. We all know it won’t be his last….

Please note that the Leven clean up is due to take place on Saturday 9th and Sunday 10th of May. The meeting point will be Bonhill Bridge at 10 am on both days and in a change to the usual format we will be working up river this year from Renton to Balloch. All members and non members are welcome and refreshments as always will be provided.

Finally, just a reminder that bait fishing is now permitted on the Leven, but as per our bye-law,only when the bait is used in conjunction with circle hooks. Please note this measure will be strictly enforced and anglers found not using circle hooks will be asked to leave the water and the matter reported to the committee.

River Endrick
Silver on the Endrick

We weren’t even into May when the first sea trout of the year were recorded from the Endrick, Chris Turner and Colin Fergusson landed a few fresh fish at Barn’s Ford at the end of last week after a lift in water. It just goes to show that you can never be too early on this river.
Continuing with the good work around the Barn’s Ford area member Crawford Thomson has built a few benches and constructed a small bridge to improve the fishing experience for members.Thanks Crawford.

While there is always a chance to find a bit of cover on the Leven the same cannot be said of the Estuary where there is no escaping the elements.Over the last month when the conditions have been benign then fishing has been good. On the 21st of April Ian Morrison had 4 good sea trout up to 2.5 Lb within a 20 minute spell and went on to hook a number more. However, when the weather turned markedly cooler so did the fishing with only a few brave souls venturing out in conditions more reminiscent of early March than early May. With some warmer weather on the cards next week it is hoped that things may pick up again on the estuary.

Loch Lomond
The fish are here!

After the first fish were caught in April the question was how many fish had made it into the Loch before the gates were raised on the Leven and were they present in sufficient numbers to give the Loch anglers some consistent sport. I am happy to report that there are reasonable numbers of fish out there with some fresh fish being netted.
Euan McGrandle opened his account on the Loch on 25 April when he caught a fine fresh 9Lb salmon on the golden sprat. Like several fish taken in mid April this one was also seal marked. On the same day Euan also caught a 7Lb sea trout again on the trolled sprat. Both Bob Forshaw and John Bell also lost nice fish, John dropped his when fishing the Endrick Bank and John lost his off Claddich.
On Friday 1 May things took off. We know of at least 2 fish that were caught on the Loch and rumours of a further two being landed have still to be confirmed. Those we know of we know were taken by Scott Sinclair (below) and Lenny Grant with both fish weighing about 10Lb. 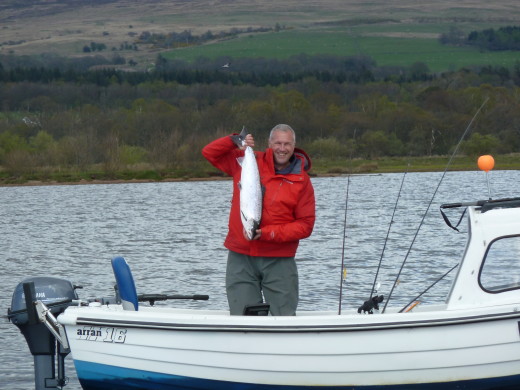 We have not heard of any further fish being caught on the Loch but with an increasing number of seasoned regulars heading out from Balmaha and Balloch it won’t be long until more fish are encountered, particularly given the extra water now flowing down the Leven.

We would like to remind members that fishing in Camstradden Bay, particularly in front of the House, is prohibited under the terms of our lease from Luss Estates. We ask members to respect this arrangement.

Members should note that from 1 May 2015 they will be eligible for a 10% discounted rate at Carron Valley Fishery for a mid-week session (Monday – Friday).

Carron Valley fishery is located at the top of the Endrick catchment about 5 miles east of Fintry. It is stocked with rainbows as well as holding an impressive head of wild browns and powan. Fishing is from the bank or from boat. The Committee are delighted to highlight this water and would ask that members show their membership cards when claiming the discounted rate.