Some heavy rainfall on Friday and overnight caused a slight spike in levels but not enough to make any impression on the Loch and the news from Scottish Water isn’t good. The Loch Loch levelshave been dropping steadily since the beginning of April and the current level is 24ft 8” (7.53m). If the Loch reaches 24ft (7.315m) prior to 1st of June then the barrage will be operated at Plate 4/Plate 2 operation at an earlier date. Effectively this means that the flow will be reduced to summer low with weekend compensation. Time for the Renton rain dance……. 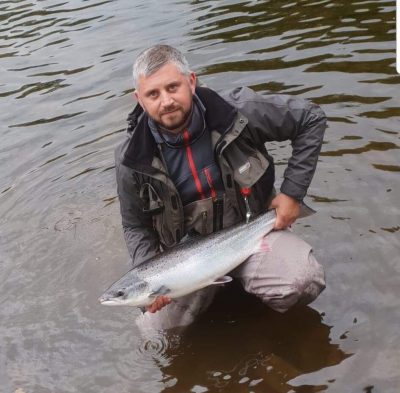 7 May: Jamie Arthur with his first Leven springer (12/13lbs) caught on the fly in the Renton area, returned.

Today we hear that Chic McLean had his first springer (23lbs) caught at Richie’s Lade on the worm and safely returned. 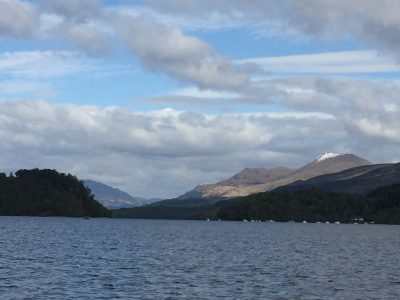 Still a bit raw out on the Loch with a steady northerly breeze. On Thursday there was a dusting of snow on the Ben but according to the forecasters this week should be warmer…..’not a heatwave, just respite from the cold conditions’. We had an unconfirmed report that on Saturday (11th) a Balmaha boat landed and returned a springer in the 15-20lb class at Cashel and a Voldac based angler lost a heavy fish off the Carrick. 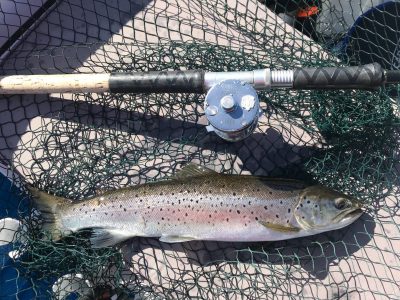 Since the beginning of the season we have had numerous reports from anglers of much higher than usual numbers of sea trout in the Loch. A mix of well mended melts, over wintered and fresh fish weighing from 2-10lbs with a surprising amount reported in the 3-5lbs range. They are well distributed round the islands and east shoreline, with Net Bay featuring regularly.

Bob Forshaw reports that over three weekends he landed 30 trout on the fly and troll. The biggest was a kelt of 8lbs. The author set out on Thursday and landed 4 fresh fish off Cashel, the heaviest at 5lbs. While a proportion of these trout will head down to the ‘salt’ for the summer some will remain hopefully giving Loch fly fishers sport. In the last couple of years it was thought that sea trout numbers in the Loch were in decline but the numbers this season so far suggests otherwise.

Further  measures to control the numbers of fish eating birds on the system are being explored but we need as much evidence as possible to present to SNH. On the Endrick we have employed the recommended and licensed  ‘bird scaring methods’ with little success. As there is no doubt that these birds migrate between the Loch and river we are gathering as much information as possible to present a case to SNH.

We ask  anglers who come across rafts of  goosanders or mergansers on the Loch this season to assist by contacting us with authenticated details – date, location/GPS/ map ref/ photographs, estimated numbers. Due to the diversity of feeding on the Loch it is difficult to prove that theses rafts are feeding on smolts but we have recently noticed a decline in their numbers on the Endrick consistent with the smolts having run and more birds are appearing on the Loch. FEBs are non discriminatory feeders that will  feed on any fish species including powan, which are protected.

During our meetings with Marine Scotland we have highlighted the problem of seals on the River Leven and Loch Lomond. MS are now looking at the problem of these creatures operating out with their natural environment and possible control measures. They have asked that we forward details of sightings of seals seen above the tidal reaches of the Leven and in the Loch. Again, if you happen to come across seals on the system, please send us details with as much authentication as possible.