With the first spring salmon due off the River Leven any day let’s look back at how the Lomond system fared last year…. 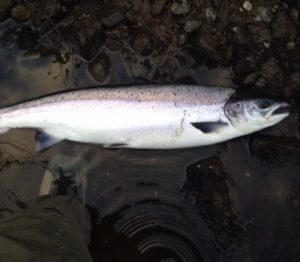 The season opened on 11th of February but nothing of note was caught until 13th of April when Leven regular Pat O’Brien landed the first confirmed salmon of the year (12lbs) at the Glebe on the fly. A few more soon followed, taken mostly on the fly at the usual spots, Piles, Double Pipes and Stuckie Bridge. Despite the lack of rain the barrage closed at the end of April but nevertheless there was good sport during May with fish in the 20lbs class caught and lost.

The dry spring continued with the Loch dropping to its lowest level for the month since the barrage was introduced. The drought conditions didn’t put the grilse off and a few appeared at the end of May. Things quietened down during June but with heavy thunderstorms in July the gates opened and for the most of August into September conditions were perfect with good numbers of summer salmon and grilse coming through. Dry conditions at the beginning of the season were reversed during the summer with heavy rainfall and floods, at times too much water. Anglers that did persevere reported seeing good numbers of coloured salmon present in the upper reaches and also fresh fish turning as they sped through into the Loch.

Catches of salmon and grilse were down very slightly (5.5%) on the previous year, which we can partly attribute to the drought conditions during the spring/early summer. As mentioned, there were some much heavier specimens around bringing the average weight of salmon caught to 12.7lbs.

Low water conditions always suit the sea trout angler. This year catches were up by 62% with the summer months being the most productive. Some nice specimens in the 6-10lbs range landed and the average trout at 2lbs. 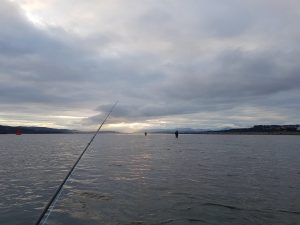 Over the past few seasons the Estuary, with its rich feeding, has provided excellent sport. However in 2019 recorded catches fell by 50%. It was noted however that angling effort fell by about the same amount. Higher numbers of sea trout than usual were to be found in the lower reaches of the Leven so it’s most likely that anglers preferred to stay on the river. Those who did fish the salt were rewarded with fine specimens in the 10 -12lbs range and an average trout at 2.3lbs. The usual marks at Levengrove, the Havoc and /Cardross all producing

On 4th of May LLAIA treasurer Scott Sinclair landed the first fish off the Loch at the Claddich shoreline. Weighing 27lbs it was a classic Lomond springer and the heaviest fish recorded from the system for the season. It took a trolled black and gold rapala and was safely returned. It wasn’t long before a few other spring fish were netted but by the end of May the lack of rainfall saw the Loch drop to its lowest level since the early 80s. The bottom end went quiet and many feared another poor season. 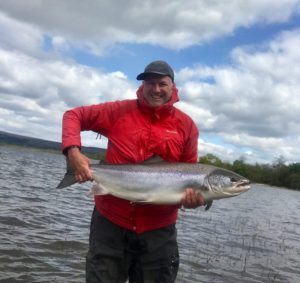 A few anglers decided to take a sail up to the ‘tap end’ and they soon discovered that the run had opted for the colder deeper waters. Those prepared to make the journey found it very worthwhile. Several boats reported landing two salmon and losing others. In no time our boatmen were enjoying the best sport for several years. It’s been said that the Loch fishes best when low and this proved to be the case. June was a good month and with the arrival of grilse July and August even better. Thunderstorms in August prevented many boats from going out and by September the loch level had risen substantially and catches dropped off.

Salmon caught on the Loch last year averaged 11.6lbs with some heavier specimens in the 20lbs class among them

Right from the very start of the season anglers out on the troll encountered sea trout in numbers that hadn’t been seen for years. A mix of fresh and overwintered fish, most about the 1-2lb mark but some heavier trout in the 8-12lbs present that we would normally expect early season. Catches continued throughout the year with an average fish at 2.5lbs. While a large proportion of sea trout were caught on the troll well off the normal fly fishing drifts, those out on the fly did have better back end sport than of late, with fish to 6lbs. Why this sudden increase in our sea trout stock has come about isn’t known. There are various theories going around and maybe we’ll get an answer eventually but it’s nice to have a positive talking point for a change. In 2018 recorded numbers of sea trout caught on the Loch were down by 55% at only 241. Last season they rose by 310% to 989.

A few salmon and grilse appeared in June and July but it wasn’t until some decent rainfall in August that the main runs began to build up momentum. By the end of September things had moved into top gear and Endrick fishers enjoyed great sport until the end of season. The Endrick is of course a spate river and timing is of the essence. Good to see some new members on the river and catching their first salmon off the system. Several members catches numbered into double figures. 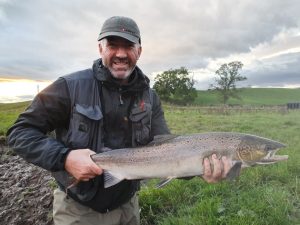 Sea trout numbers held up well too with an 80% increase with the average 2.6lbs and trout in the 4-6lb range not uncommon. 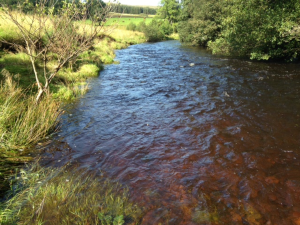 We don’t usually expect much from the Fruin until the back end and although few salmon made an appearance during the period end of July till September, it wasn’t until October that grilse arrived in numbers and some bars of silver too! Still very few members out fishing this fine, little river. Like the River Endrick, success depends very much on spate conditions. In October four rods accounted for 3 salmon, 18 grilse and 14 sea trout. Dick Dickson reported that in one day’s fishing he landed a salmon, 3 grilse and a sea trout of 4.5lbs. Sea trout that run the Fruin tend to be heavier than in other parts of the catchment. The average caught last year was 4.3lbs with several 6lbs+.

The long dry spring curtailed sport during the earlier part of the season but when the rains arrived the system took off. Much heavier fish than usual around and the further increase in grilse runs is very welcome news. The sudden recovery of our sea trout stocks is quite incredible but we’ll see how things are in 2020. Generally not too bad a season at all and getting back to more like how the Lomond system should fish. Long time member Russell Boyd reports achieving something last season that he has been trying to do for years, to catch a salmon or grilse from each part of the system, Loch, Leven, Endrick and Fruin. Now sorted at last and great to hear!

During the year there was news received from VOLDAC and Balmaha of much better sport on the Loch than in previous years. In September and October members fishing the Endrick experienced the best grilse runs for several seasons. Catch returns for 2019 have been analysed and confirm these reports. The combined total of salmon and grilse recorded is the second highest in over 10 years. News comes from the Loch Lomond Fisheries Trust that this year their smolt trap produced the highest numbers recorded since the project began. All in all there’s room for some cautious optimism on stock recovery.

What has brought this good news about? There has been no artificial stocking on the system since 2011 so today’s returning fish will most certainly have more natural origins. There will of course be other factors that need to be taken into consideration such as habitat and water quality but there are strong indications that catch and release is working. Last year, with the imposition of Category 2 for salmon conservation, our local policy allowed anglers a choice. For the coming season the same rules apply but our anglers are urged to continue to carefully consider the future of their fishing before they despatch their catch. Tight lines everyone for the new season ahead.

Acknowledgement and thanks to Jim Raeburn for his effort in compiling this review of the 2019 season.