This past week has continued to see both increasing numbers of fish in the system and real quality fish being landed. This is in contrast to the low water and low rainfall conditions that we have being experiencing. Some decent prolonged rainfall is not only much needed but would most likely ‘unleash’ even more fish arriving into the system that may be waiting or loitering in the saltwater. On Lomond The Endrick Bank continues to be a productive area with several fish being landed and seen rising along the Bank and the River Leven is enticing more and more fish with every tide.

What better start to the past week’s fishing than this absolutely pristine fresh of the tide fish. Local angler Graham Dunt Stewart landed this beauty on the fly (Monkey Variant) at “The Piles” on 12th June. Well done Graham and I think that your  smile says it all!  Graham also earned a well deserved “Fish of the Week” award by the Daily Record for his achievement. 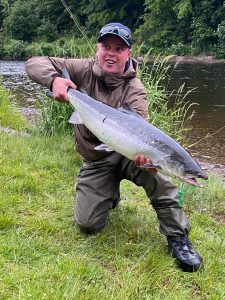 Lomond anglers have also enjoyed success this week with numerous reports of fish being landed around the loch although unfortunately not all reports can be confirmed at this time.  Congratulations to Robert Mair who successfully landed a beautiful salmon (12.5lb) near the Fruin mouth on Saturday 13th June. Remarkably Robert landed a 12lb fish at the same spot and on the same lure at almost the same time a  week earlier! 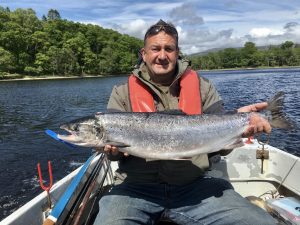 Local angler Alex Bowie landed a 12.lb hen fish also on Saturday 13th June on the Endrick Bank. Louis Russell ventured out with his Father Gordon Russell, on Friday (12th) and Saturday (13th) camping overnight with  brothers Clyde and Cameron Russell near the top end. Their efforts and perseverance were rewarded with a cracking 14lb hen on the way back to Balmaha.

Bob Forshaw continued to show how it’s done on, this time on the 17th June by landing another salmon (9lb) and a grilse (6lb) once more on the Endrick Bank, well done Bob!

On Friday 19th June Michael King hooked a lovely fresh salmon (10.5lb) yet again on the Endrick Bank and expertly netted by yours truly as we fished together during a great 2 day trip. Well done Michael! We also had a brief take by a large fish on the same lure (Orange Tomic) just as we were about to bring the rods in whilst approaching Buccinch for lunch on Friday 20th June. 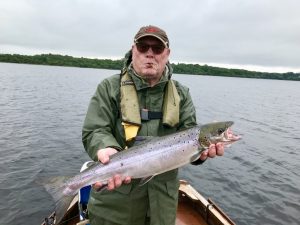 In the past week or so there has continued to be many reports of sea trout being landed with reports of some larger specimens being hooked and lost. At the beginning of June local angler Alan Armstrong caught four sea trout up to 4lb and all on a rapala. Alan also reported dropping a large fish off Lonaig in the same week. Well done Alan and please let’s leave aside any debate as to whether sea trout or loch trout or brown trout

The above represents details of those ‘reported‘ and “confirmed” catches, there have also been indications of several fish that either cannot be confirmed or unfortunately did not ‘stick’ including one lost at the net off Rob Roy’s cave.

It is really uplifting to see so many good fish are being landed around the loch and the Leven. Another heartening indicator is the number of sightings of fish showing including a sizeable fish that repeatedly leapt as we crossed the Endrick Bank on Friday 19th June and also sightings of large fish rising up at the burn near “Chalky’s Camp‘ on Saturday 20th June.

We wish everyone the best of luck in their fishing exploits and respectfully remind all anglers to observe best practice at all times in carefully netting, unhooking and releasing your prize fish and always to stay safe whilst on the banks or on the water.