Whilst there have been many anglers on the system this week there have been few confirmed reported catches. The past week has  been a real mixed bundle of weather with temperatures reaching the mid twenties, blazing sunshine then falling pressure and some real thundery downpours. There are certainly good numbers of fish in the system based upon sightings of fish either lost, moving or rising. Hopefully following some fresh water, then dropping levels and a more settled weather pressure system then we will see more fish moving into and up through the system.

The river ‘appears’ to have enjoyed a fairly quiet week based upon confirmed reported catches. This may be due to in part to the hot temperatures and bright sunshine during the first half of the week before the low pressure systems brought in the tropical deluges at the end of the week. As stated it will be interesting to see how the fishing picks up following recent downpours and unsettled conditions.

Yet again the River Leven, which is not particularly renowned for it’s quality brown trout fishing showed just how good sport it can produce with yet another fine brown (2lb) trout caught and landed on the fly this time by Craig Brown at Bonhill Bridge. 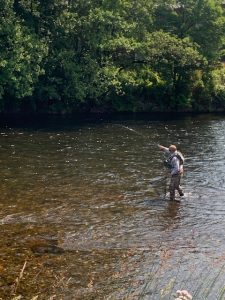 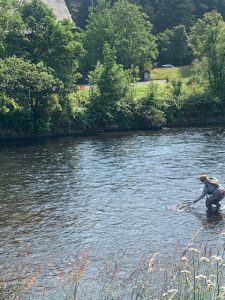 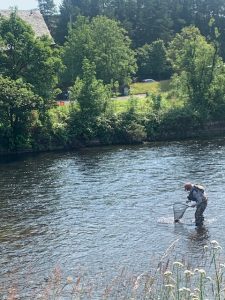 As in recent weeks there have been plenty of boat anglers on the Loch out from both Balmaha and Balloch with many boats now covering the ‘tap end‘ reaches of the loch at this point in the season. There have been unconfirmed reports of fish landed including a fresh sea liced salmon (12lb) landed off Lonaig on Friday 26th June. There have also been reports of several fish hooked and unfortunately lost at various familiar spots around the Loch this week.

Angler Scott Russell enjoyed great sport on the Endrick with three sea trout on 23rd June, the biggest being 5lb, on the fly signalling to some that the Endrick is starting to awaken. The recent rainfall and rise over the weekend may well provide the opportunity for some good fishing during the coming week on both the Endrick and Fruin waters for those anglers who time it correctly.

The Estuary continues to provide some good rewards for those chasing sea trout based upon feedback from several anglers. The usual productive areas at Levengrove, below the castle and Cardross proving successful provided that you time the tide correctly.

We wish everyone the best of luck in their fishing exploits and respectfully remind all anglers to observe best practice at all times in carefully netting, unhooking and releasing your prize fish and always to stay safe whilst on the banks or on the water.