Well the recent biblical downpours certainly produced some action in the last week moving fish into and dispersing them throughout the system. We have had reports of fish all across the system and some absolutely stunning examples of salmon and sea trout. The return this weekend of heavy rain showers may well have the effect of further improving fishing once things settle down. The numbers of Grilse being caught or lost has markedly increased in recent days hopefully indicating the start at least of a decent Grilse run.

The Leven had a strong return to form this past week with some outstanding fish being landed. Not least of these being one of two fish caught on the fly by dedicated local angler Graham Dunt Stewart who landed the magnificent fish below of 14lb on 29th June at the Factory Wall on the fly.Graham also landed an 8lb fish, dropped two further fish and landed a 2.5lb sea trout during the same session. Well done Graham your long hours and dedication producing the results and that well deserved smile that says it all! 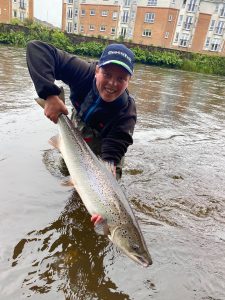 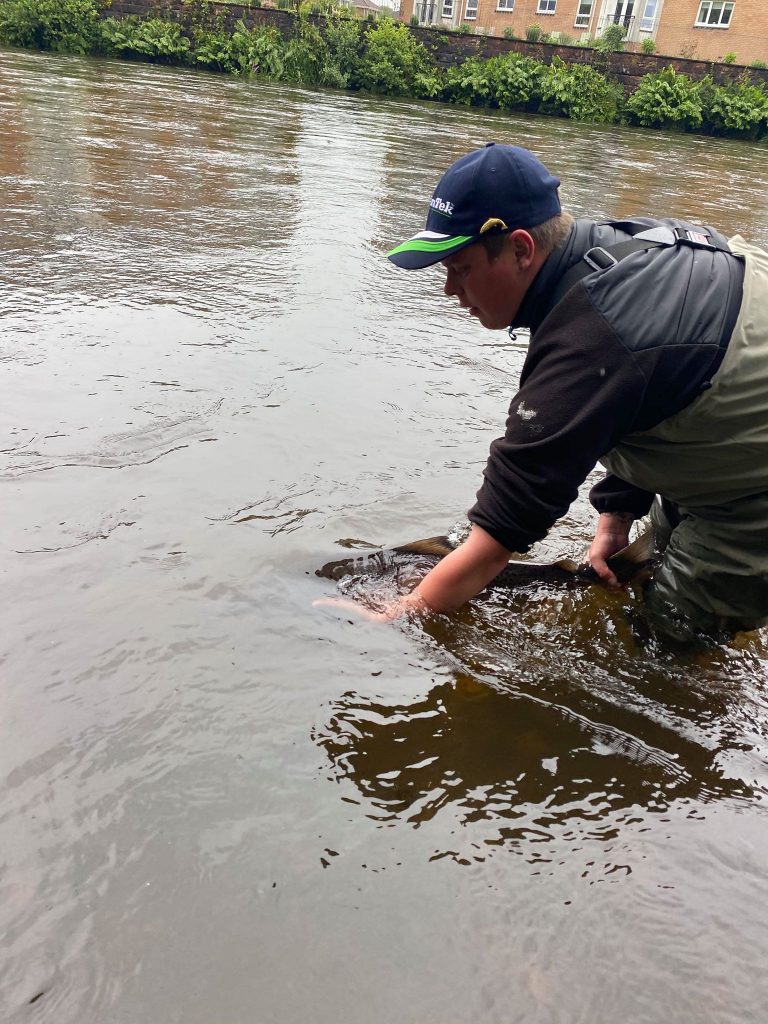 On the 30th June Samuel Burgoyne was rewarded once more this time with a 4.5lb Grilse expertly netted and carefully released. (video clip here).

Also on 30th June experienced Leven angler Chic MacLean landed an 11lb salmon on the fly at the “Street Run” which he then followed by landing a 10lb fish at “The Lade” a few days later on the 1st July, well done Chic. 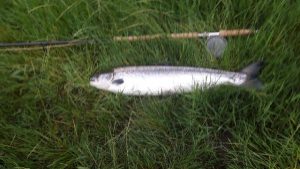 Steven Gilfeather landed another lovely Grilse on 3rd July and has just advised that he lost another Grilse today showing the increasingly positive numbers of Grilse entering the system which will hopefully continue to grow.

Local experienced Loch angler Dick Dickson had a productive day on the Loch on Monday 22nd June with a fine salmon (15lbs) eventually landed in the kneeling position after a fair tussle amidst a heavy wave! Dick added to his day’s success with a couple of sea trout of 2lb and 3lb, well done Dick sounds like a great day.

Samuel Burgoyne headlined again with a truly ‘awesome’ sea trout from the Loch on Saturday 4th July, this fish dwarfs the 13cm rapala that it fell for weighing in at 14lbs and safely released!  Well done Samuel, whatever you are doing keep doing it. 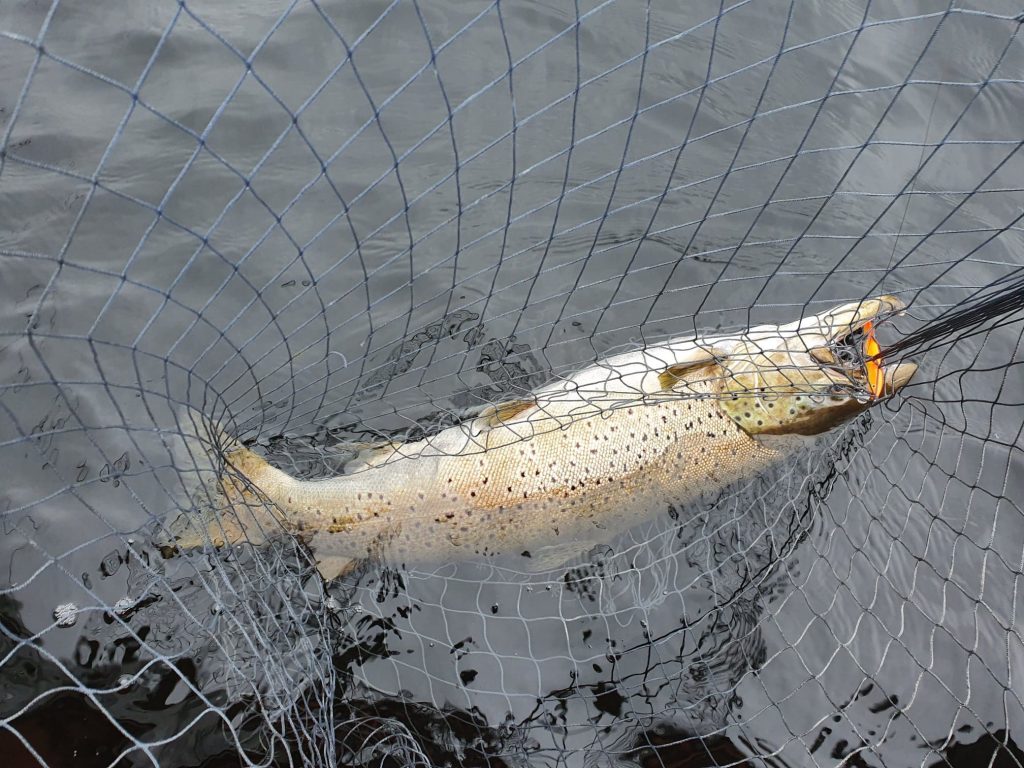 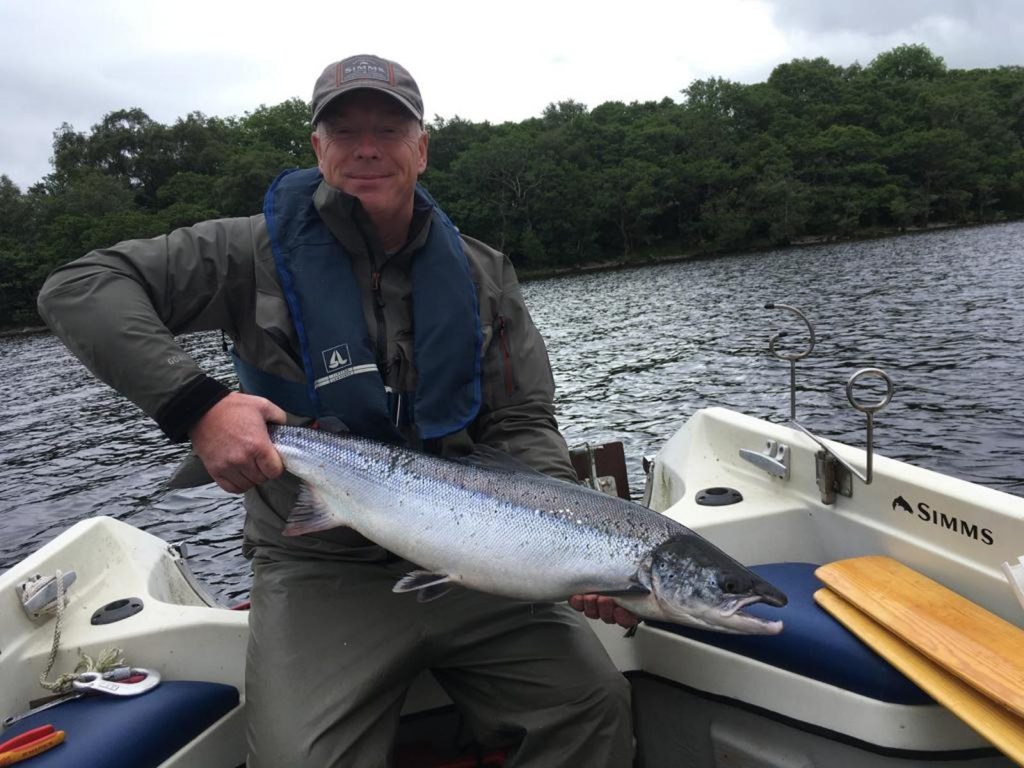 The Endrick has awoken with several salmon, Grilse and Sea Trout catches now being reported. Scott Russell landed a fresh bright Salmon (8lbs) on 29th June  at Barnsford adding to his catches of sea trout up to 5lb a few days previously on 23/06/20, well done Scott. Angler Ryan Maloney had reward for a his long hours perseverance in the rain with that change of fly and “one last run through the pool” which produced a feisty 3lb Sea Trout from Craigbell.

Meanwhile Lee Taylor showed how its done on July 1st with a lovely Salmon of around 9-10lbs (estimated) which had been in the system for some time by its absolutely beautiful colours (returned), well done Lee! 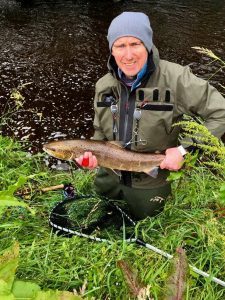 Dedicated angler Colin Ferguson was rewarded for his marathon shift and commitment with a pristine Grilse of 4.5lb and a nice brownie of 2.5lb on 4th July, congratulations Colin. 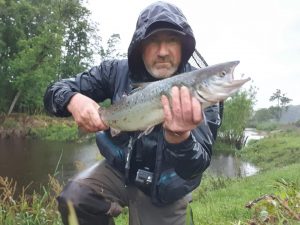 LOST – FLYBOX: One of our members lost his fly box at the Barnsford area on the Endrick on Saturday 4th July ( Scott Wallace). If anyone came across this then please contact us via email at reports@lochlomondangling.com

No “reported” catches from the Fruin but with recent heavy rainfall I would be surprised if no fish have been landed from the Fruin in the past week, watch this space.

Whilst we have received no detailed reports of catches recent news indicates that the Estuary continues to provide some good rewards for those chasing sea trout based upon feedback from several anglers. The usual productive areas at Levengrove, below the castle and Cardross proving successful provided that you time the tide correctly.

Call me an ‘optimist’ but as has been demonstrated recent conditions have had a marked impact upon catches of fish landed as well as lost and there is every indication that forecasted conditions and water levels will continue to improve the fishing for all in the coming week. So tight lines everyone and stay safe.

We wish everyone the best of luck in their fishing exploits and respectfully remind all anglers to observe best practice at all times in carefully netting, unhooking and releasing your prize fish and always to stay safe whilst on the banks or on the water. The image below helps to illustrate ‘best practice’ in handling and release of all fish. 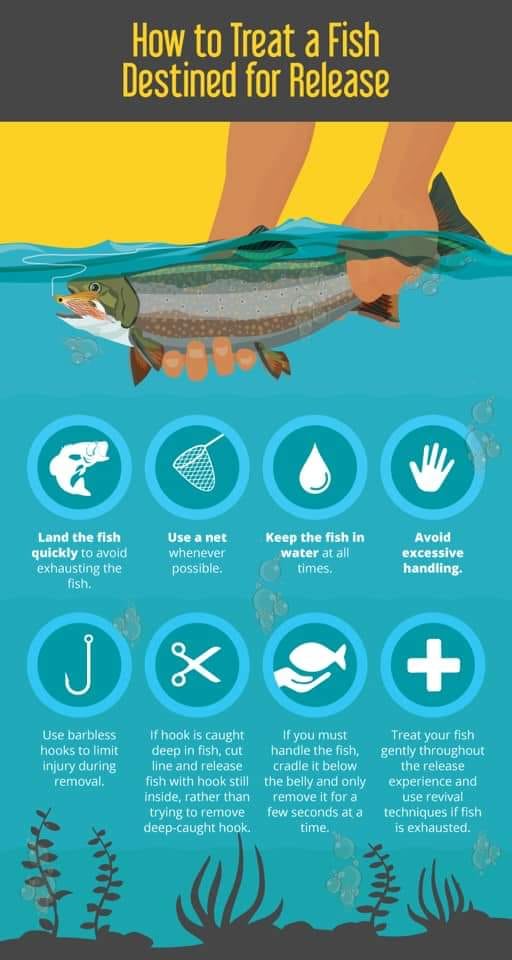