Saturday 31st October marked the end of another Season and yes it has been a somewhat ‘unusual Season‘ on the Lomond System in terms of lock downs, restrictions and significant numbers of escaped farmed fish entering our system all adding to resource and time requirements.

Such events, restrictions and limitations however has not it would seem dented the enthusiasm and commitment from our anglers and members to safely and successfully fish our beautiful system. We would thank all members and anglers for their support and cooperation in responding to and helping to manage these abnormal events this season.

The last few weeks of the season has seen some very favourable water conditions with an associated significant number of anglers on the system with many fine fish being landed and safely released to do ‘their thing’. As can be seen there have been some very impressive and quality fish landed recently with fish in the class that can match any of our East coast and other systems around the country.

Membership renewals are now being issued and these mailings also contain the Catch Return Form. We would remind all Members that Catch Return Forms must be completed and returned prior to 30th November 2020 in order to allow the Association to process and provide this information to Marine Scotland before their deadline. Catch return can also be provided using the online form on our website using this link: LLAIA Online Catch Return Form 2020

Please note that a Nil Catch Return is required even if you did not catch anything.

Stewart Traquair landed this fine Brown Trout of 4lb on 15th October on the Top Pool and after a fair tussle was landed just above the “Stuckie Bridge” highlighting once more the fine quality of Brown Trout fishing within our system. 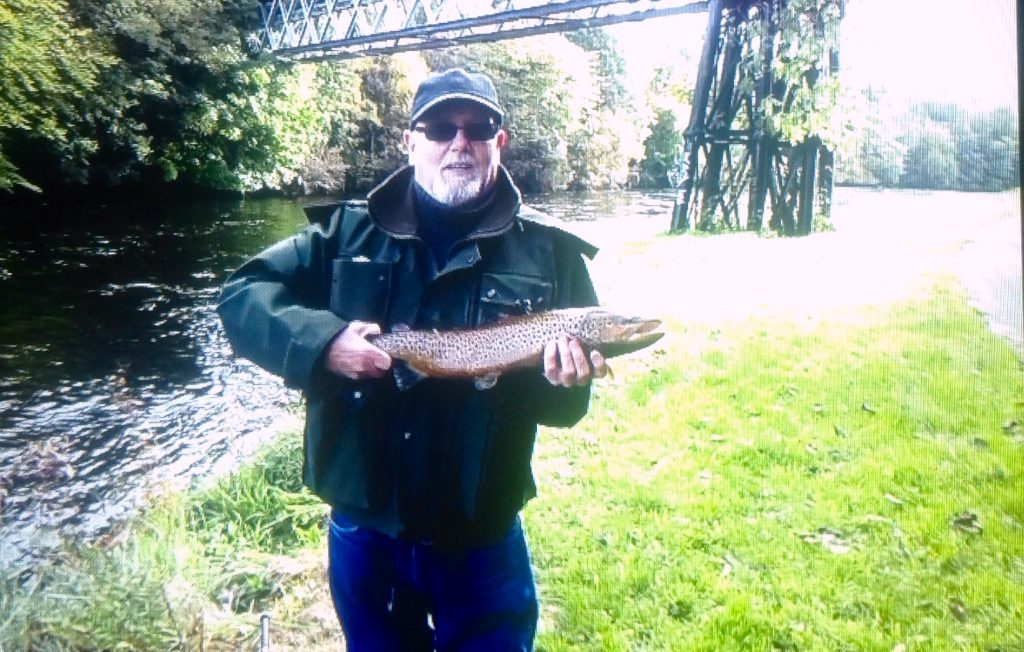 On Saturday 17th October experienced Leven angler Graham Dunt Stewart continued to show just how its done by landing and safely releasing a fabulous fish ‘estimated’ at 17lbs (although looks to be heavier than this) at “The Chestnut Tree” on the fly. However it was not just any fly it was Graham’s first salmon caught on one of his own tied flies which is even better, congratulations and very well done Graham. 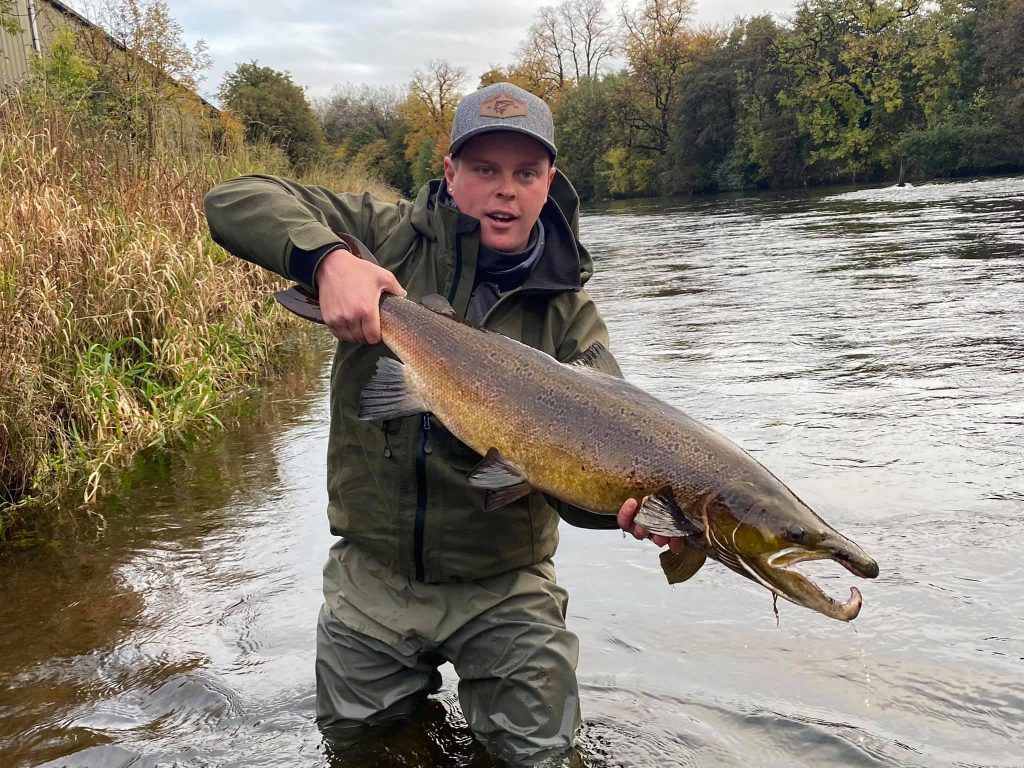 Meanwhile on the 19th October Eddie Frazer hooked and landed a lovely wee Grilse of 5lb on the worm whilst fishing “The Glebe” which was safely returned. Congratulations and well done Eddie. 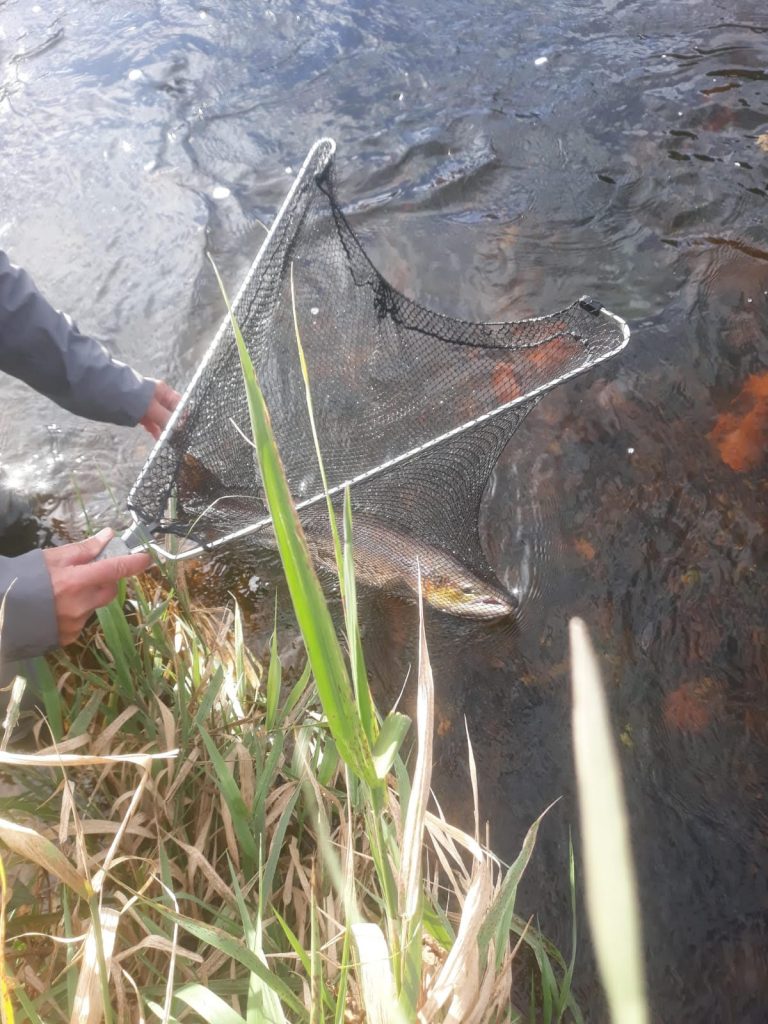 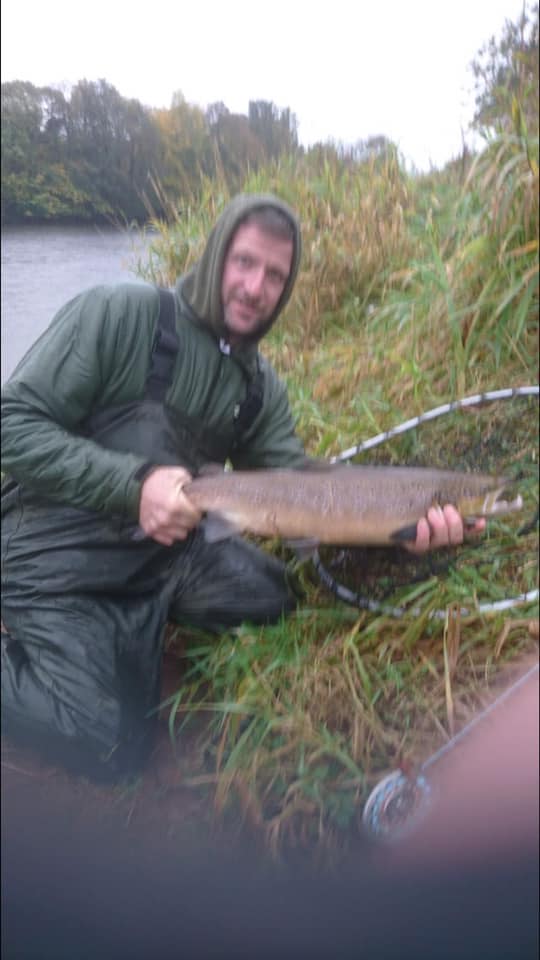 On Tuesday 20th October Graham Dunt Stewart continued to raise the standard by producing another fine large cock fish of approximately 20lb on the fly whilst fishing “The Craft” . What a fish, well done Graham and congratulations I think the smile says it all. A great example for both himself and the system. 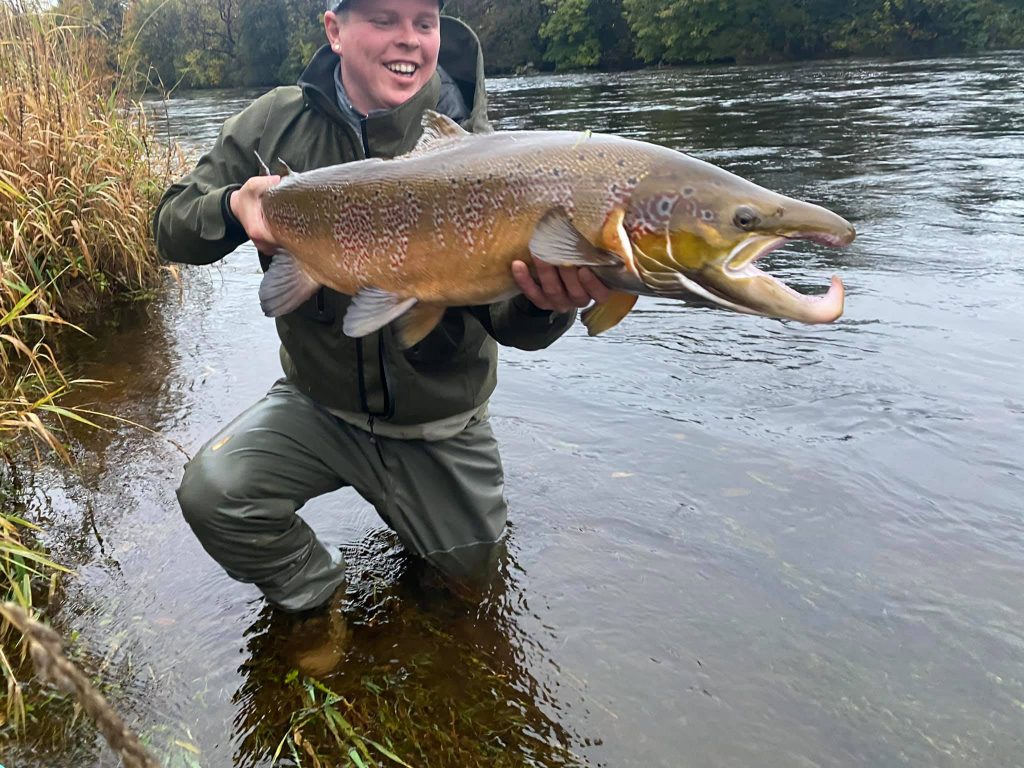 Lomond angler Alun Pryce landed another fine fish on Friday 23rd October of around 9lb on the fly at the “Factory Wall“. Congratulations and well done Alun. 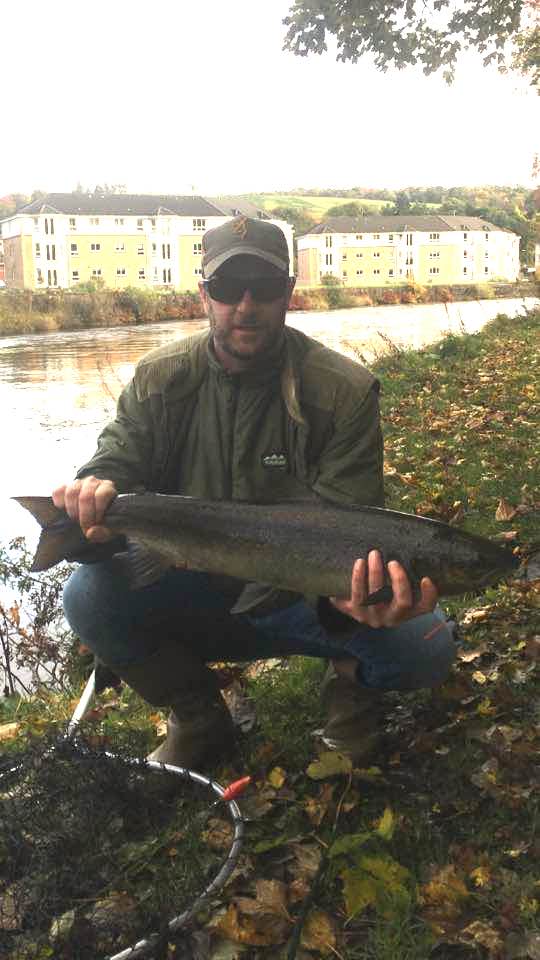 On Saturday 24th October Leven angler James Summers successfully landed and released a cracking fish of 12lb whilst fishingh the worm at the “Top Pool“.  Nice one James, congratulations. 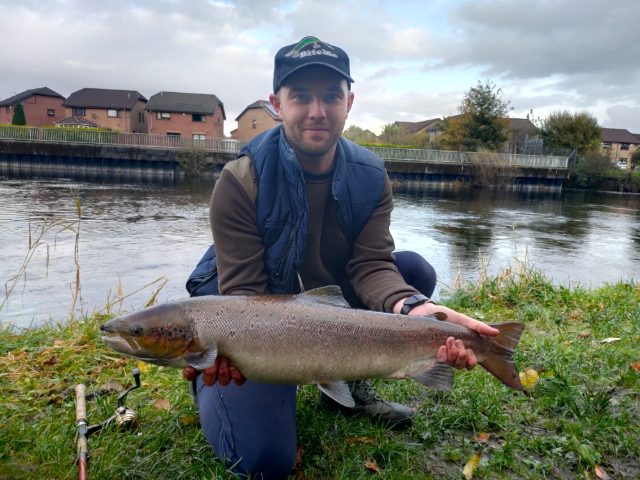 Clearly there were some very big adult fish around in the last few weeks. Experienced Leven angler Davie Robertson highlighted this by landing a fine fish estimated to be over 25lb on the fly once more at “The Glebe” on Monday 26th October. The fish was safely and carefully returned. What a fish Davie, well done and congratulations.

Experienced Lomond angler Alun Pryce produced another fine fish of 18lb on 27th October on the river whilst fishing the fly, congratulations and well done Alun on producing a strong end to the season. (No image available).

Also on Tuesday 27th October experienced angler and Leven regular Derek Hughes braved the downpour and was rewarded by successfully hooking and landing a fine Grilse of 8lb below Bonhill Pool on the fly. Congratulations and well done Derek, the smile says it all. 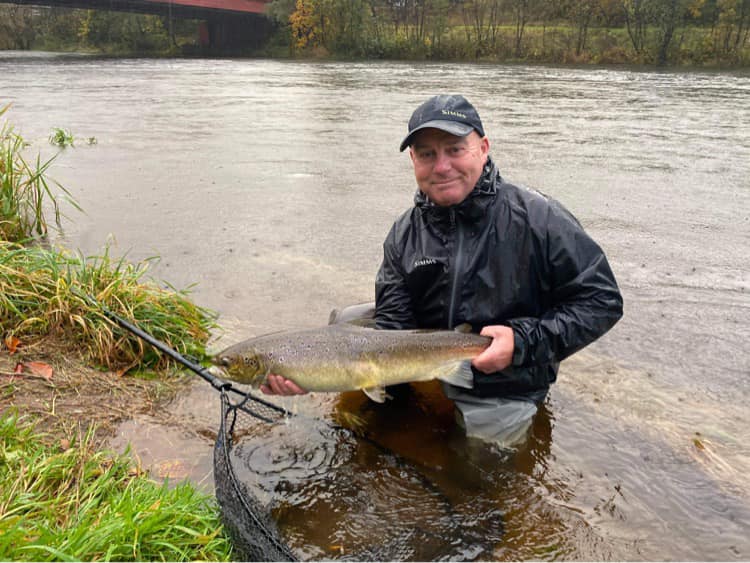 On Friday 30th October, the penultimate day of the end of the season then yes guess who, Graham “The Fish Whisperer” Dunt Stuart conjured up another lovely fish of 8lb on the fly and another of 7lb (est) both were safely and carefully returned. What can we say other than congratulations and well done once more. 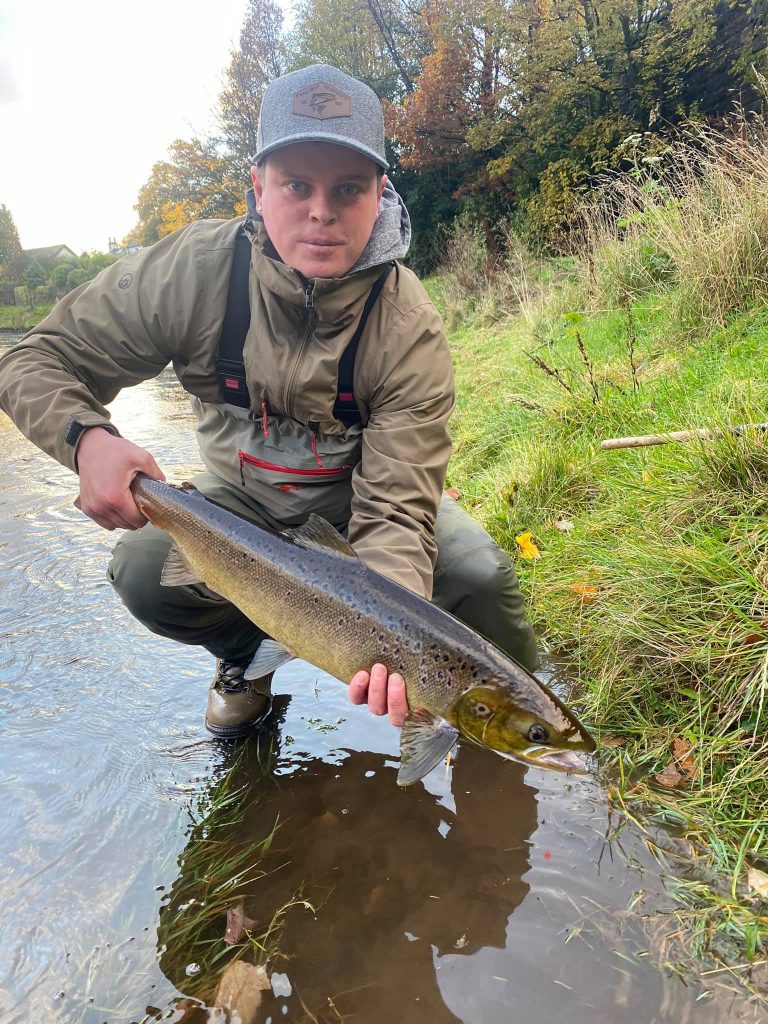 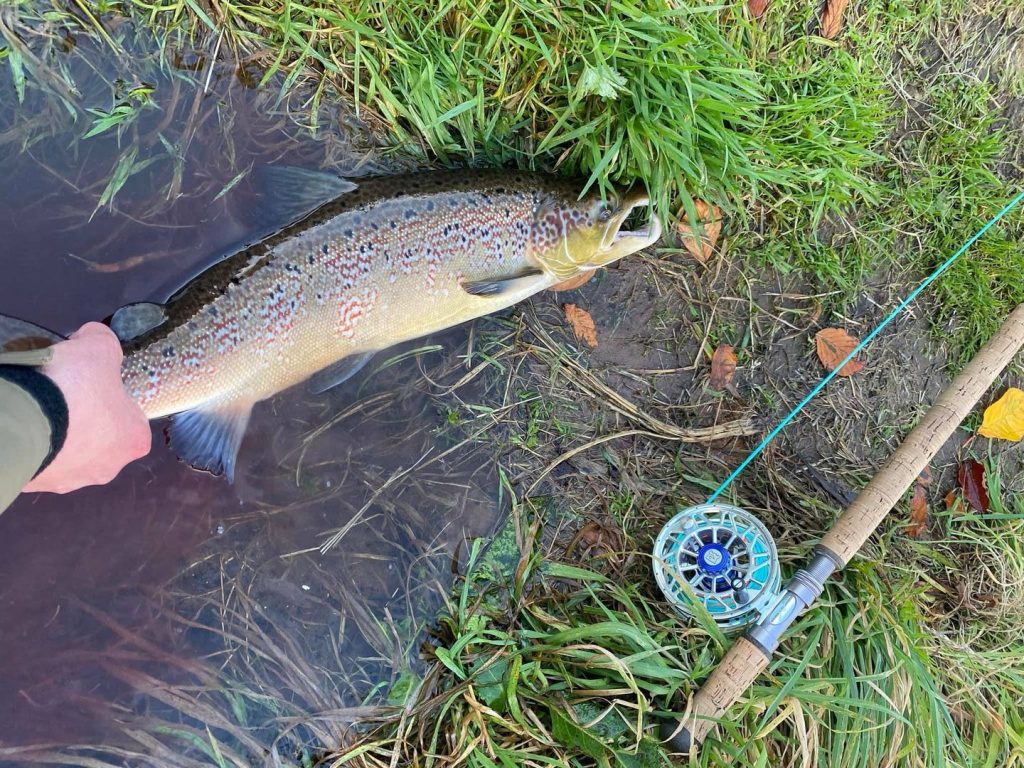 On the last Day of the Season and Graham Dunt Stewart finsishes as he started the Season with yet another fish, a lovely Autumn Grilse of around 5lb on the fly from the “Bonhill Pool”. Well done and congratulations on a terrific season – a true ambassador for the system and the sport. 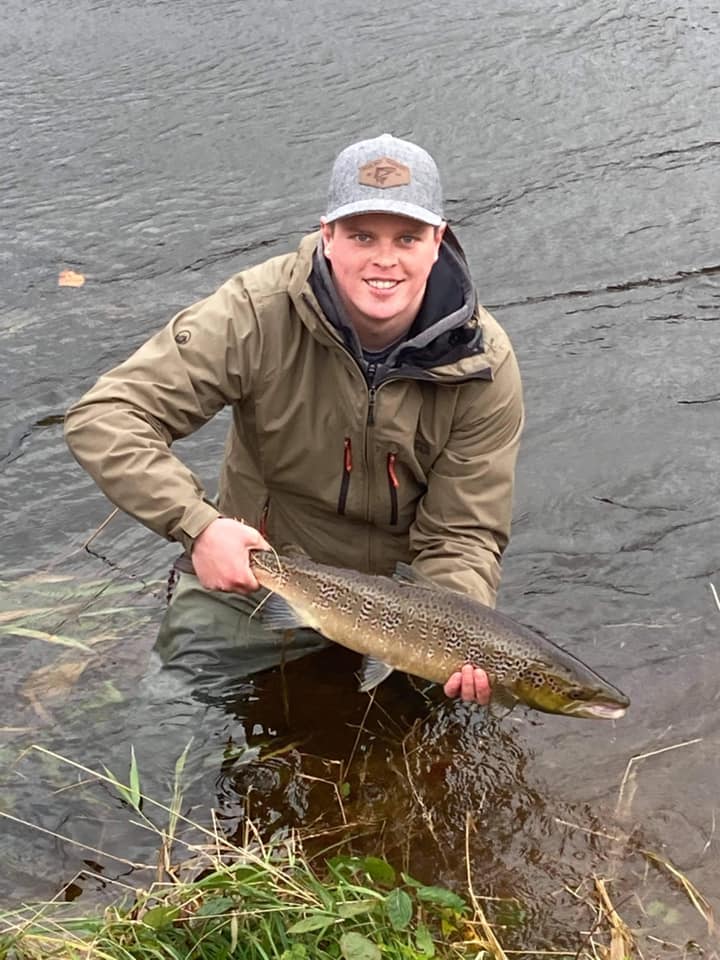 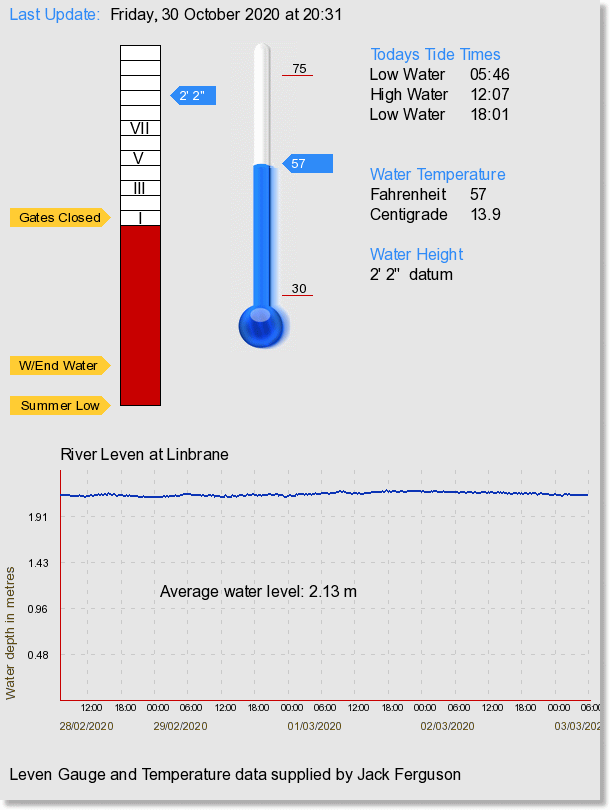 It would appear that few Lomond anglers have ventured out on the Loch in recent weeks which is not unusual given this point in the season. It is not often in current times that we can report on a fish taken on the dap but on Tuesday 13th October Jackie Bowie fishing with Husband Alex Bowie refreshingly revived this method by tempting a lovely Lomond Sea Trout of around 2.5lb to the fly on the dap. Well done and congratulations Jackie and thank you for reminding us of the effectiveness of this traditional method. 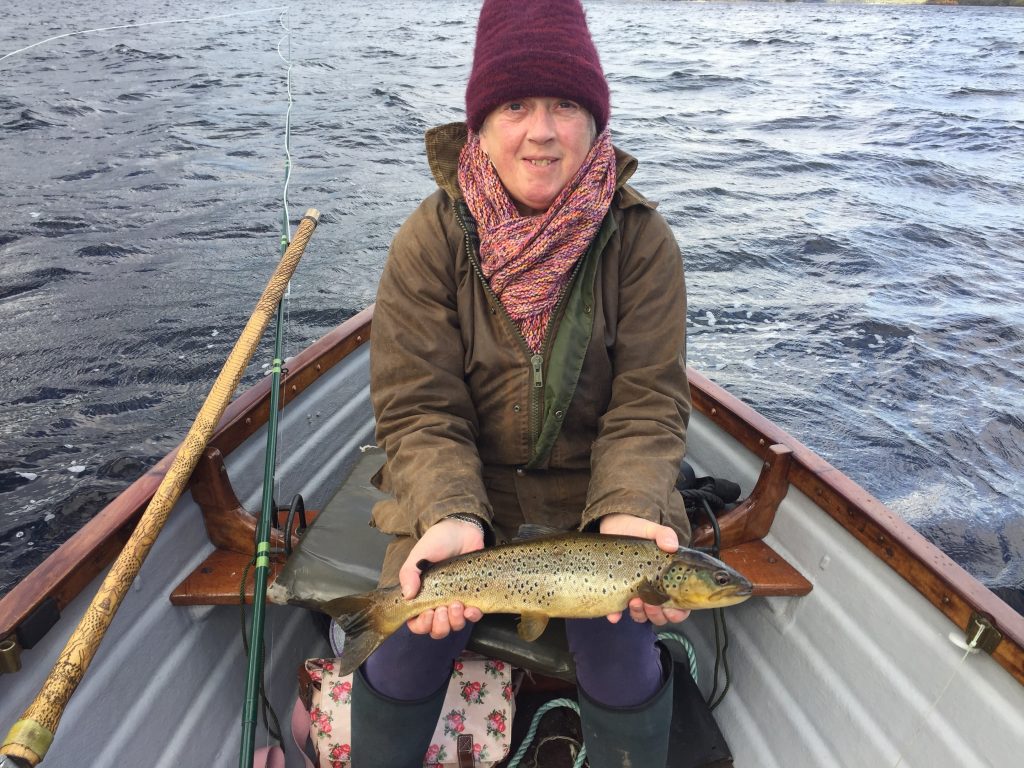 On Saturday 24th October angling author and renowned trout fisher Stan Headley ‘saved the day’ by tempting a fine Lomond Sea Trout estimated at 2lbs to the fly whilst fishing with John Bell (The Lomond Angler). Congratulations and well done in tempting a fish to the fly in challenging weather conditions. 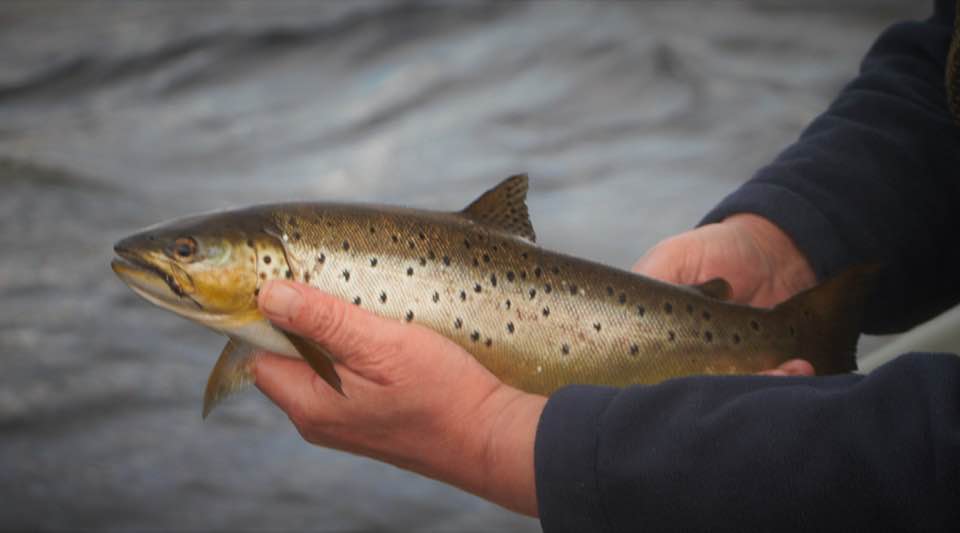 Following recent prolonged downpours the Endrick has benefited from plenty of water to entice both fish and anglers to this part of the system. Endrick experienced angler Jamie Strachan landed this lovely Grilse from the middle Endrick “Kiltrochan” area during early September. The fish was safely and carefully returned, congratulations and well done Jamie. 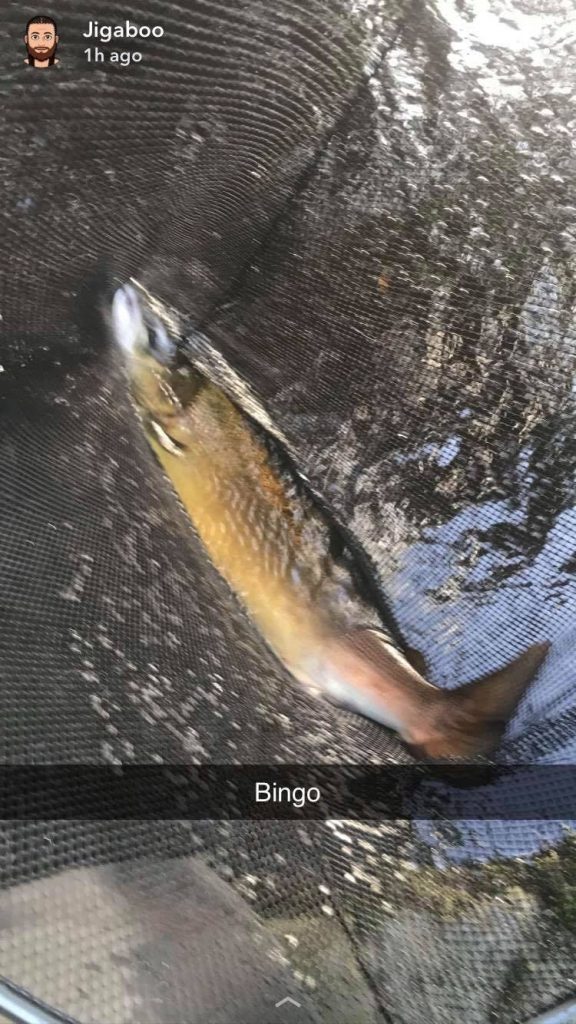 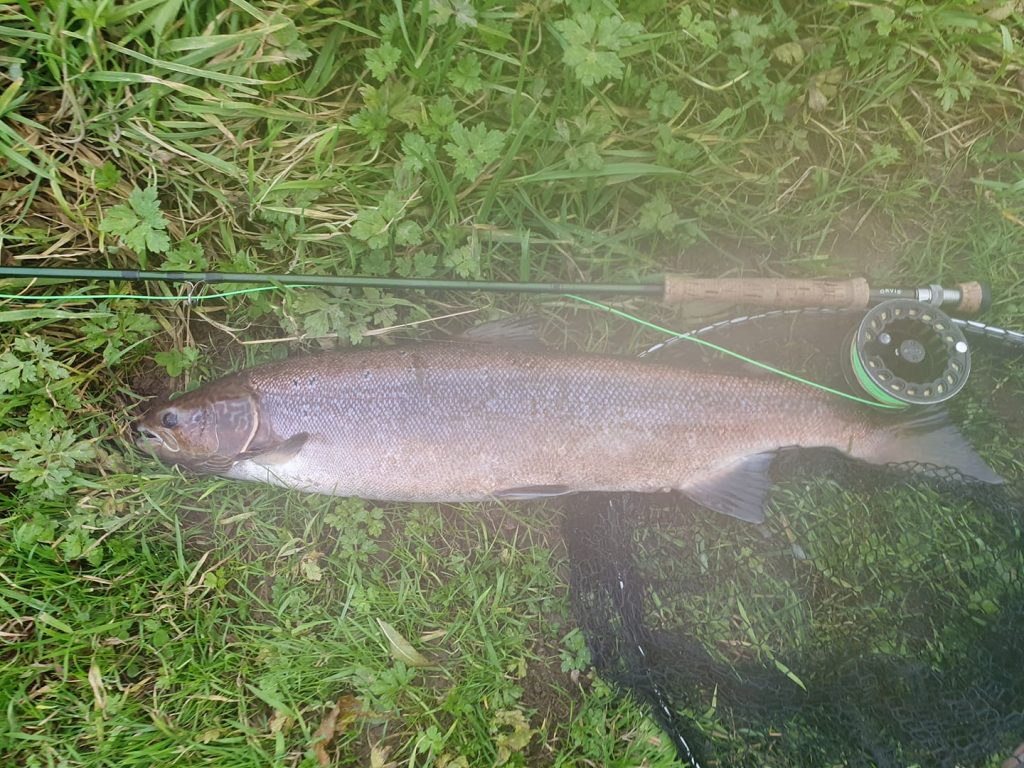 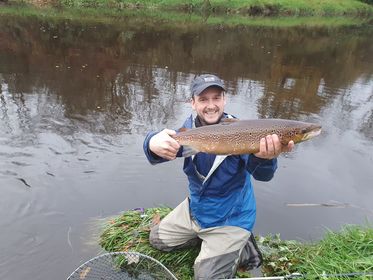 The following day on Wednesday 21st October “Craigbell Pool” proved to be the place again when Neil Glencross landed a fabulous Sea Trout of 6lb on a “Red Devil ‘ fly. A handsome fish Neil congratulations and well done. 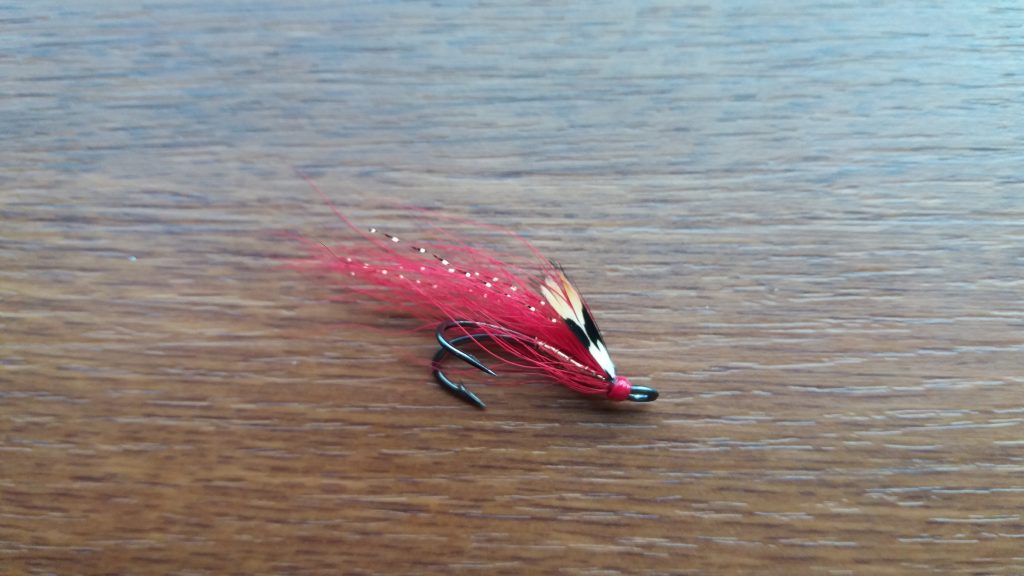 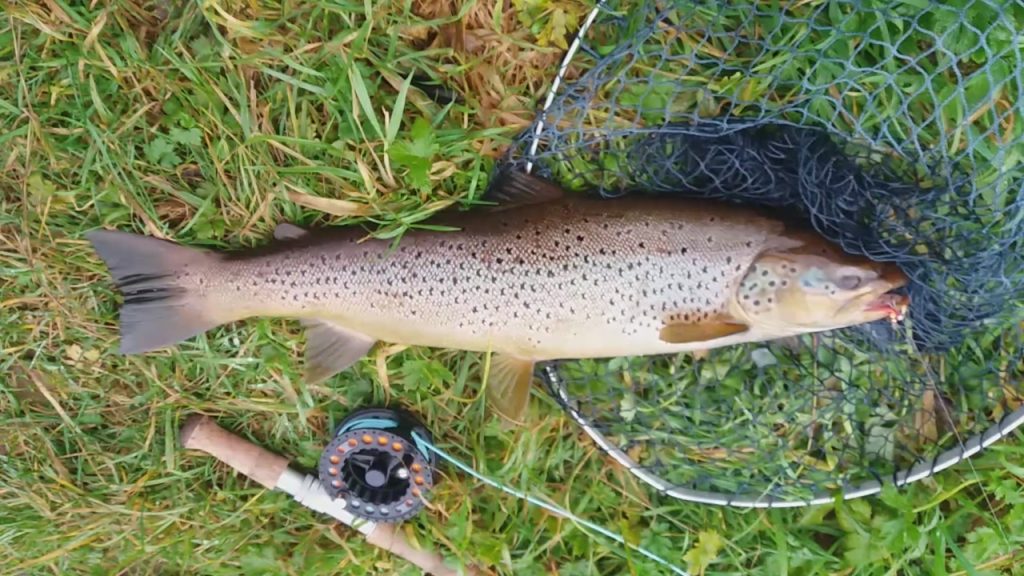 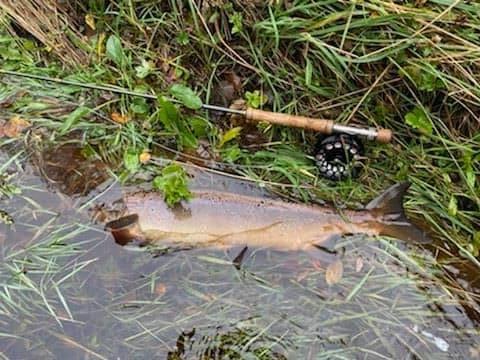 On Friday 23rd with the end of the season approaching Iain Morison was rewarded with a bonnie Grilse of 8lb in its full Autumn colours which was safely and carefully released, congratulations Iain. 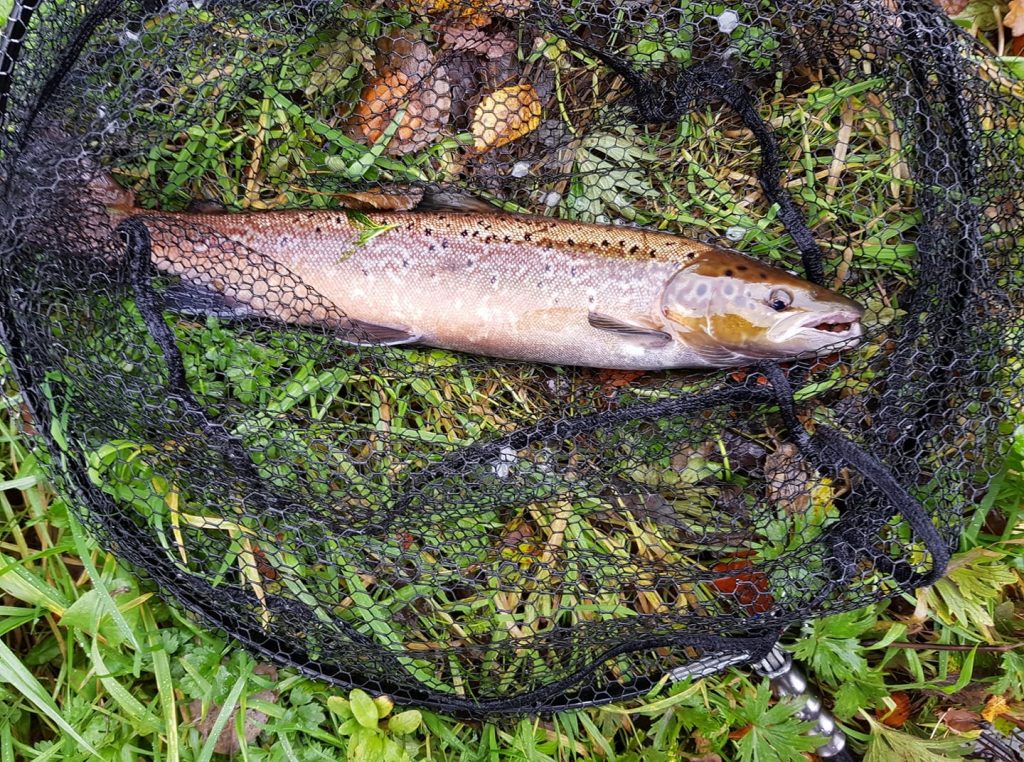 For privacy reasons YouTube needs your permission to be loaded. For more details, please see our About.
I Accept

As the 2020 season enters it’s final week new member Jamie Carruth continues his successful first season on Monday 26th October by landing a Grilse (5lb) and a Salmon (9lb) on the “Netherton” stretch both falling for a Red Frances fly. Jamie completed his day with a beautiful Sea Trout of 2.5lb which fell for a Pink Conehead. Congratulations and well done Jamie. 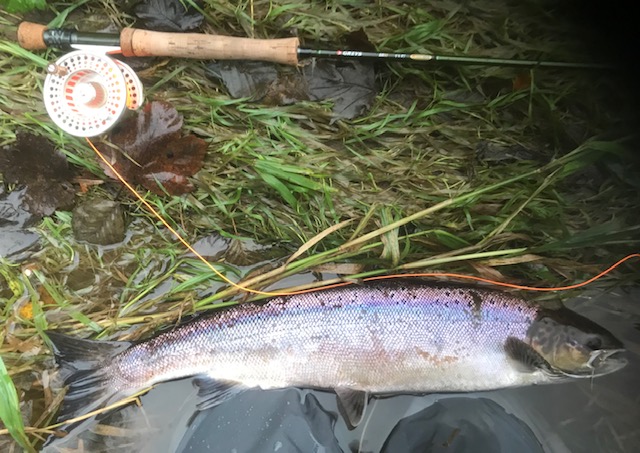 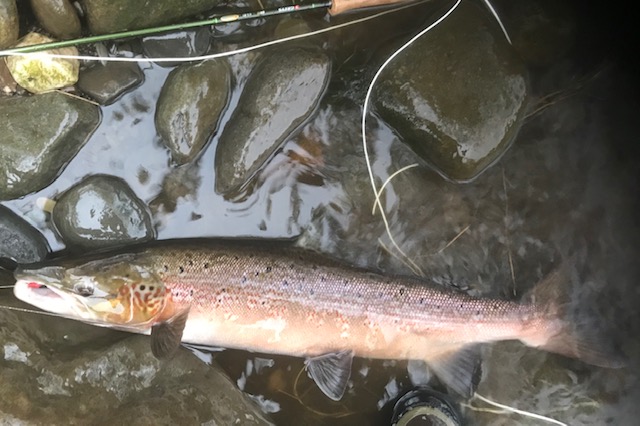 On Tuesday 27th October Jamie Carruth once more showed the way by landing two Grilse of 3lb and 6lb both on a Red Frances. Well done Jamie and congratulations on a great first season.(No images available).

Also on Tuesday 27th October Malcolm McCormick landed a Grilse of 5lb on the Fintry section of the upper Endrick (No image available).

Again on the 28th October Malcolm McCormick added to his tally for the season by hooking and landing two Grilse of 9lb and 5lb on the Upper Endrick.  Congratulations and well done Malcolm.

On Thursday 29th October Malcolm McCormick continued his winning streak with 5 fish to 9lb whilst fishing the Upper Endrick. To add to his very successful day Malcom also hooked and landed a beautiful Sea Trout of 3.5lb all fish carefully and safely released. Congratulations quite a day,  well done Malcolm. 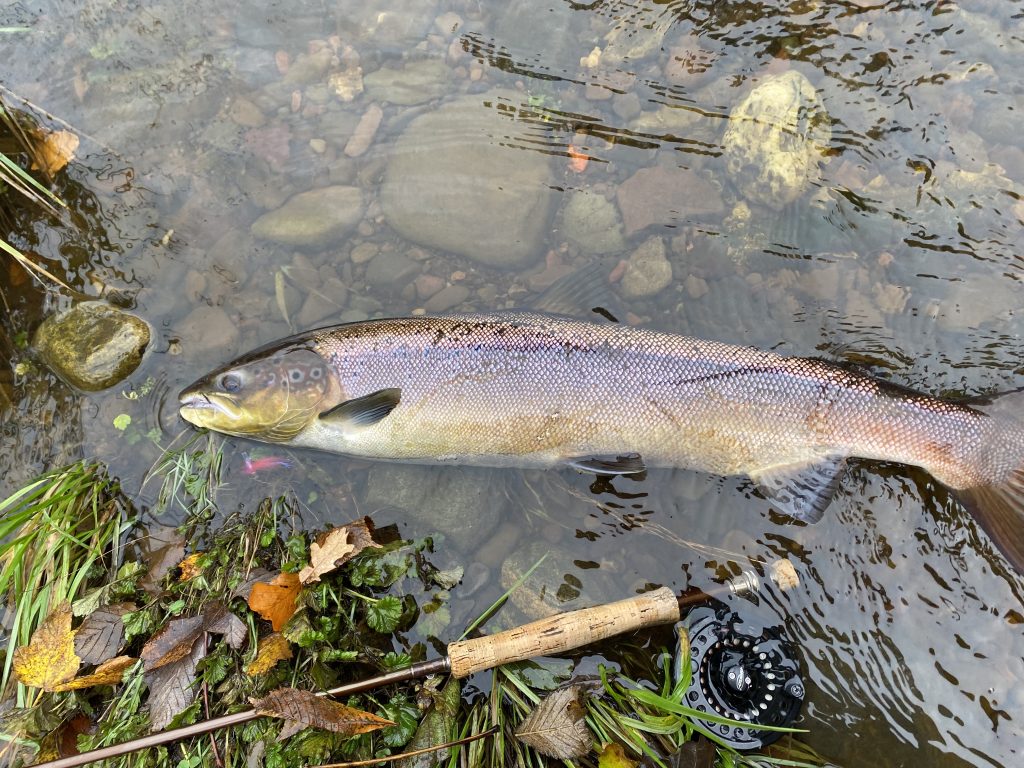 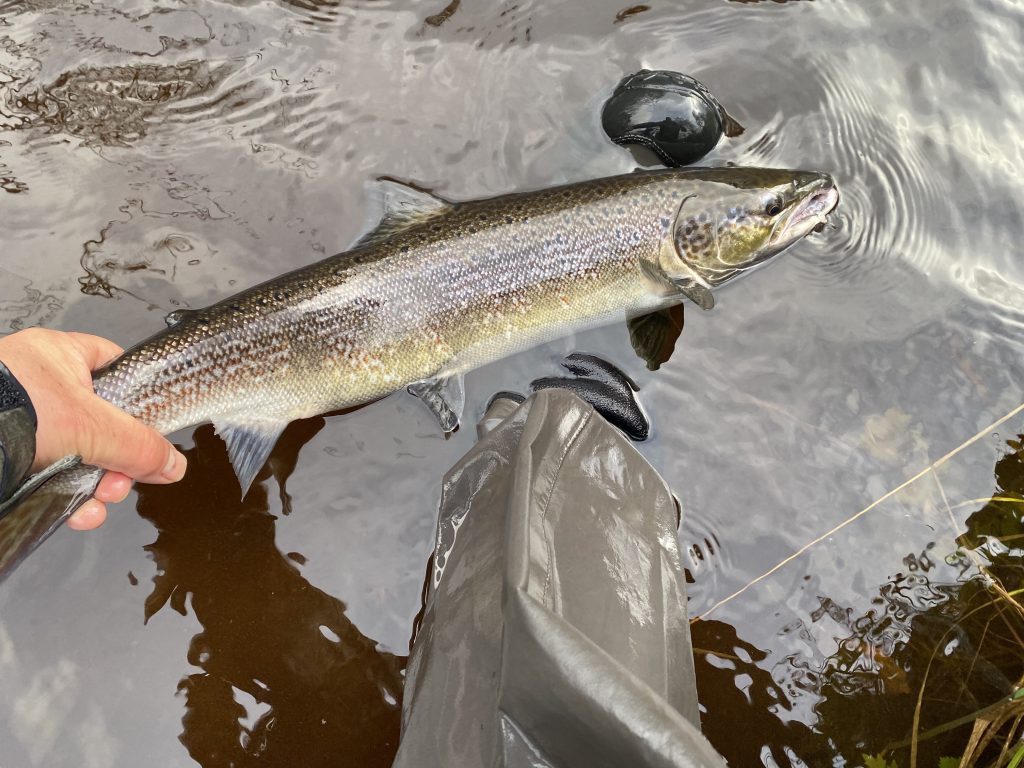 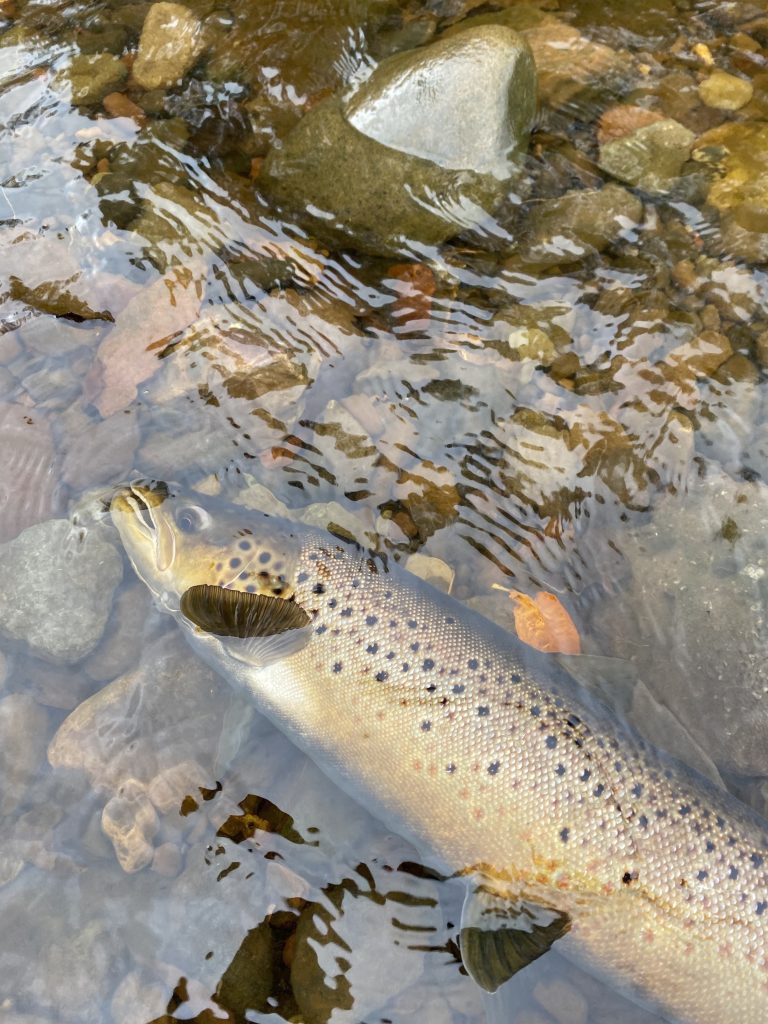 On Friday 30th October, one day before the end of this Season, Jamie Strachan successfully landed a beautiful Grilse of around 7lb just below the “Kiltrochan” run. Congratulations and well done Jamie. 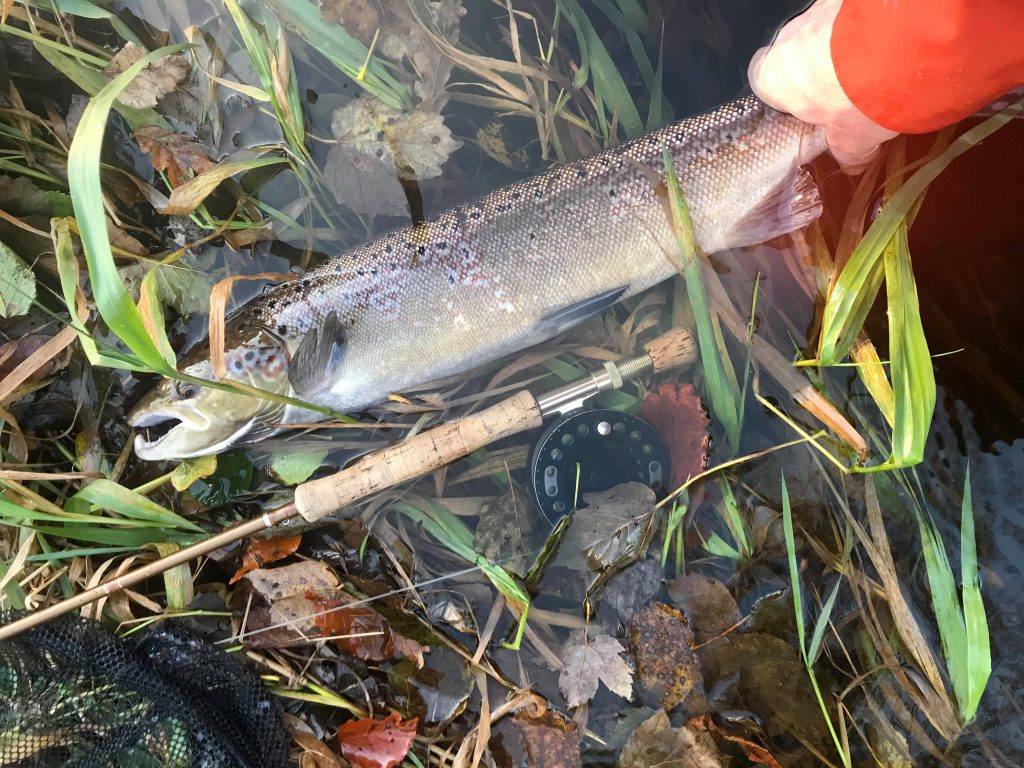 Also on Friday 30th October Malcolm McCormick ended his season on a high with a fine Salmon of 11lb and a wee Grilse of 3.5lb (Corner Pool). Congratulations and great achievement Malcolm. (No image available)

Confirmed catches from the Fruin have been relatively scarce despite the recent favourable conditions during the last few weeks.

On Saturday 24th October Malcolm McCormick hooked and landed a lovely Grilse of 5lb and a Sea Trout of 3lb after carefully considering the conditions between the Endrick and The Fruin. Great going and congratulations Malcolm. 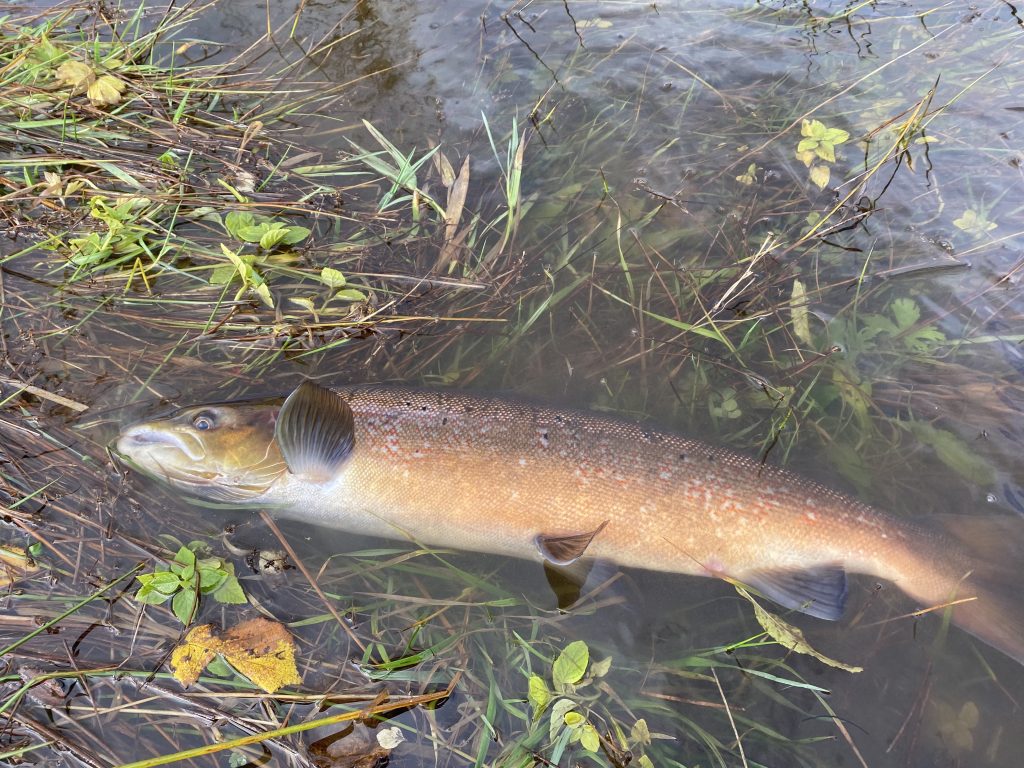 In this final System News report for this Season then the last few weeks range and quality of fish landed has not only provided some great sport for anglers. It is heartening not only in terms of numbers of fish but it is particularly worth noting perhaps the ‘range’ of species and importantly the spread of size or maturity of fish being landed during this later part of the Season. Whilst not any basis in terms of comprehensive data or for complacency concerning the health of our system, it is heartening however to see Salmon catches ranging from the smallest (3lb) Grilse right up to fish in the 20’s weight being landed. It was also great to see so many anglers on the water during the last few weeks of the Season with many of the car parks being very busy during recent days.

A sincere thank you to all anglers who have shared details and stories concerning their fishing success it is great to be able to share this information with our Members, anglers and visitors.

The Season may have come to an end but the focus and efforts of our Bailiff Team does not end with normal surveillance, patrols and maintenance duties continuing across our system during the close Season.

The work for our researchers at SCENE will also continue throughout the close season in respect of the various sub projects that have been scoped and agreed. We plan to provide a summary of work already completed together to date together with details of remaining areas of focus during the coming weeks.

Membership renewals are now being issued and these mailings also contain the Catch Return Form. We would remind all Members that Catch Return Forms must be completed and returned prior to 30th November 2020 in order to allow the Association to process and provide this information to Marine Scotland before their deadline.

Please note that a Nil Catch Return is required even if you did not catch anything.

REMINDER: We would like to highlight and remind all Members that “No Return means No Renewal” and may result in a £25 administration fee being applied to all defaulters.