Following an unusually delayed start to our season which in keeping with other West coast systems saw little action during April and May, perhaps due to record low temperatures and water levels then it is heartening to see the numbers of Salmon and Grilse now steadily increasing.  June and July on Loch Lomond have produced not only some good numbers of fish but some very good  quality fresh fish in the high teens. However with very low recent rainfall and levels during May and June then the River Leven has not matched the Loch in terms of (confirmed) catches of Salmon, Grilse and Seat Trout despite large numbers of running fish being sighted in the River. We can only hope and pray that we get some significant rainfall in the next weeks in order to freshen and raise water levels for the Leven and our other Rivers in the system. The relatively short lived rainfall of last week provided a short period of optimism and a flurry of fishing activity with fish being seen moving up the Endrick and reports of follows and fish lost during this brief spate period last week.

Following postponement last season due to Covid-19 restrictions which have now been eased sufficiently and with with bird nesting season restrictions ending at the end of June we are pleased to announce the resumption of the normal clean up weekends that have traditionally been part of our calendar of routine activities each year. The date for a work party on the River Leven has been scheduled for the weekend of July 17th & 18th and given that such needed activities were not possible last season it is important that such work is successfully undertaken and supported by all committed members and anglers this year.

The arrangements are to meet at Bonhill Bridge Car Park at 09.30 on both days. As in previous years the plan will be to work from the top pool all the way downstream as far as we can get, the fitter people with chest waders will form a line across the river and manhandle all rubbish i.e scooter’s, bikes, traffic cones large tree limbs and all non natural rubbish out of the river onto the towpath which will then be collected regularly by one of our vans and box trailer and then dumped into large skip that has been organised with the Council and that will be placed at Bonhill Bridge.

Additionally there will be strimming tasks required to strim either side of entry/exit points and the ‘sensitive‘ trimming of any problematic overhanging branches or shrubs using appropriate tools and PPE supplied.

Dates concerning the resumption of work party activities concerning the River Endrick will be announced shortly where once again the support and participation of anglers and members is much needed and appreciated. 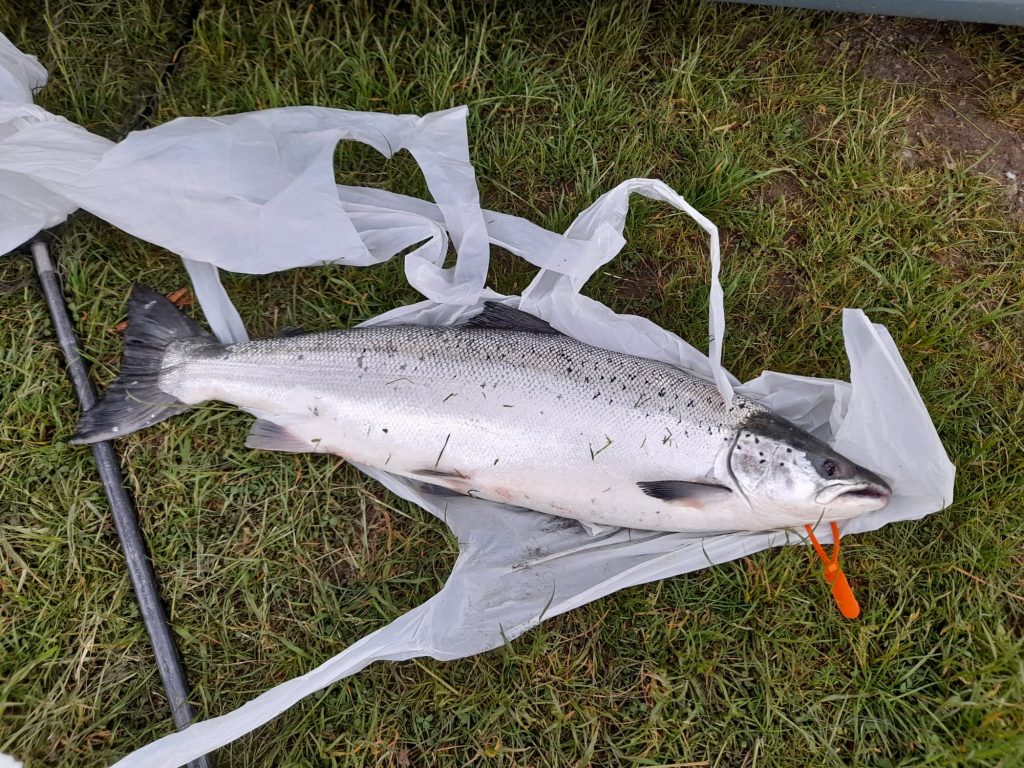 On the 5th July Billy Clark landed the first of two beautiful fish on the fly despite challenging low water conditions the first being a fish of 9lb well done and congratulations Billy. 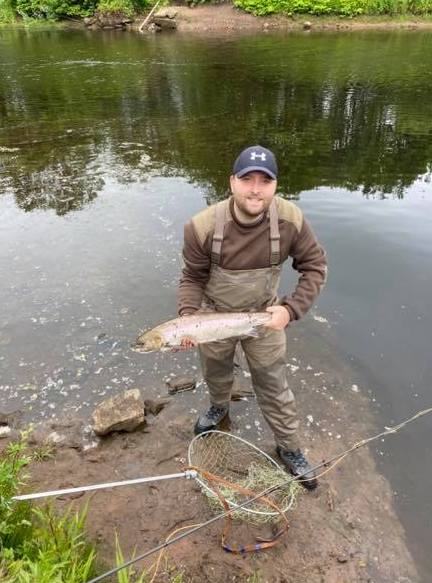 Billy quickly followed up on the 5th July landing another lovely fish of 9lb once again, congratulations and well done Billy.

Image above shows the current temperature and water level of the River Leven at the Bonhill Pool, it also includes high and low tides at Bowling and water levels at Linbrane (©SEPA). For the latest water height information continue to check the LLAIA website at https://www.lochlomondangling.com/river-leven/

Following an unusually delayed start to the game season lasting until the end of May the Loch finally began to produce fish in both numbers and quality.

On the 18th May James Cannon landed a fine trout of 7.5lb on the Loch (No image available), congratulations James.

Seasoned Loch angler and VOLDAC member John Connolly enjoyed a good day on the Loch on 28th May landing two Salmon of  12.5lb and 10.5lb in or near ‘Cemetary Bay’ plus a lovely Sea Trout of 3lb. Congratulations and well done John. (no images available).

The following day (29th May) saw Jamie Hyslop also enjoying success in landing two Salmon of 12lb and 9lb, one of which was landed near ‘Darroch’. Jamie also landed a fine Sea Trout of 4.5lb on the same outing. Congratulations and well done Jamie (no images available).

On Monday 31st May it was reported that another Loch angler successfully landed another fine Sea Trout of 4.5lb (no image available).

Wednesday 2nd June saw the Loch continuing to produce good quality Sea Trout with a fine Sea Trout of 10lb being landed by another VOLDAC member. (no image available) 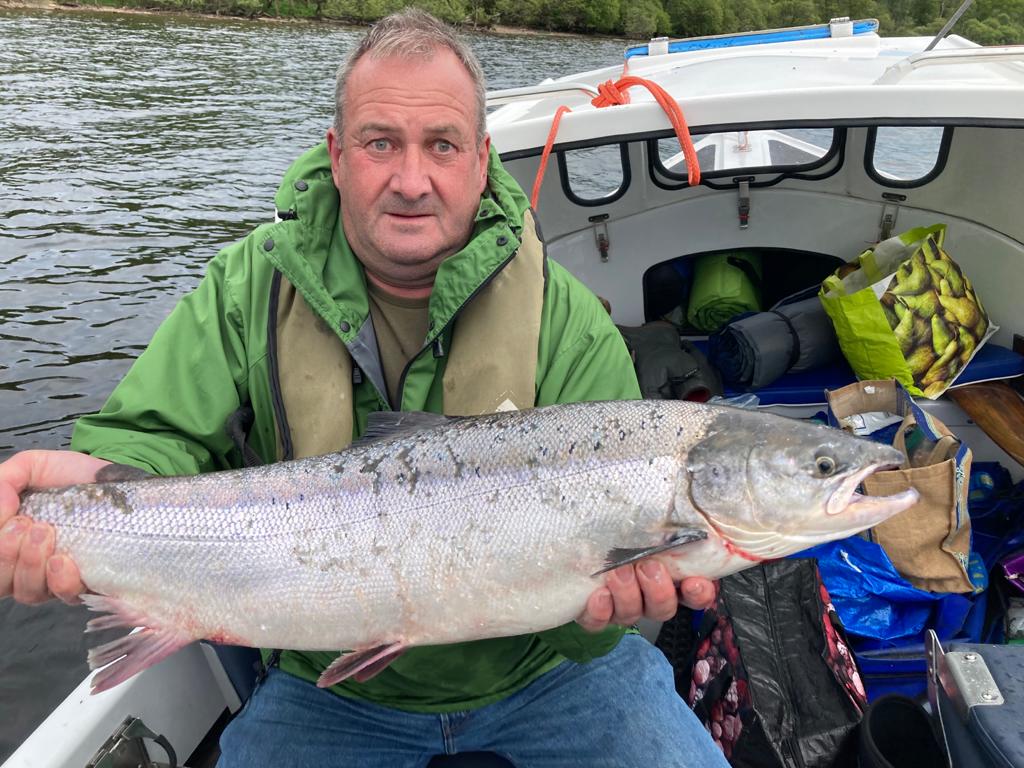 Saturday 5th June and things are ‘hotting up‘ in terms of both catches and temperatures with experienced angler Philip Shannon landing a lovely Grilse of 8lb just north of ‘Balmaha Pier’, well done Philip (no image available).

The 12th June saw Jamie Hyslop back on the scoresheet landing two fine fish of 12lb and 11lb, congratulations Jamie and looks like you are continuing your excellent form from last season. (no image available).

Experienced angler and VOLDAC member John East got his season off to great start with a lovely Salmon of 10lb. Congratulations and well done John what a bonny looking fish. 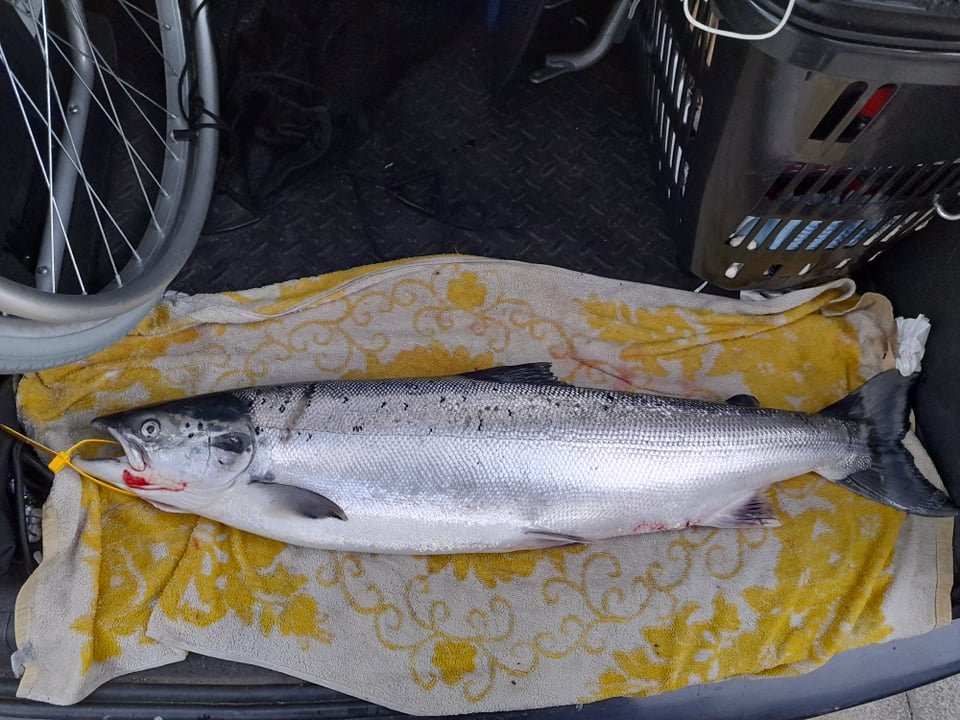 John East with a 10lb ‘Bar of Silver’ 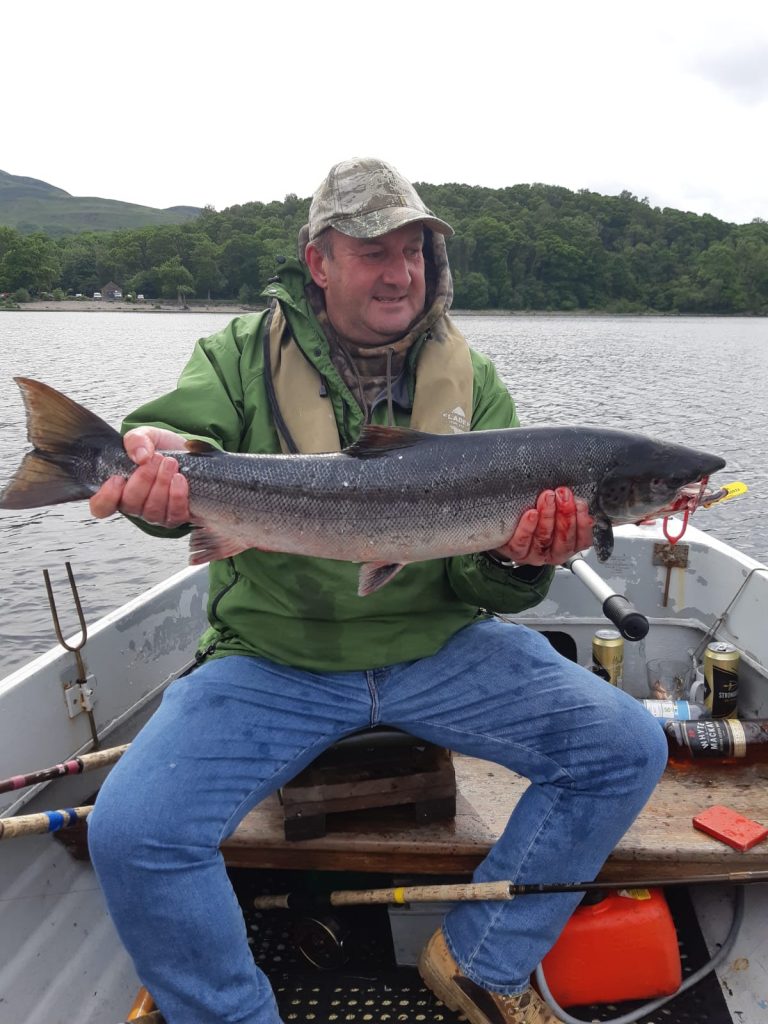 Regular Loch angler Philip Shannon was back in the news on 25th June when he landed a nice Salmon of 11lb just south of ‘Pulpit Rock‘, congratulations and well done Philip. (No image available)

On Saturday 26th June Loch angler Stephen Kennedy had a reel battle on his hands when he hooked into a stunning fresh fighting fish of around 18lb. Stephen said that the fish took off immediately with ‘the reel absolutely screaming….”. Forty minutes later Stephen had the fish complete with lice to the boat and successfully in the net. This lovely fish was revived and successfully returned. Congratulations and well done Stephen …. your smile says it all and a memorable day on the Loch for you. 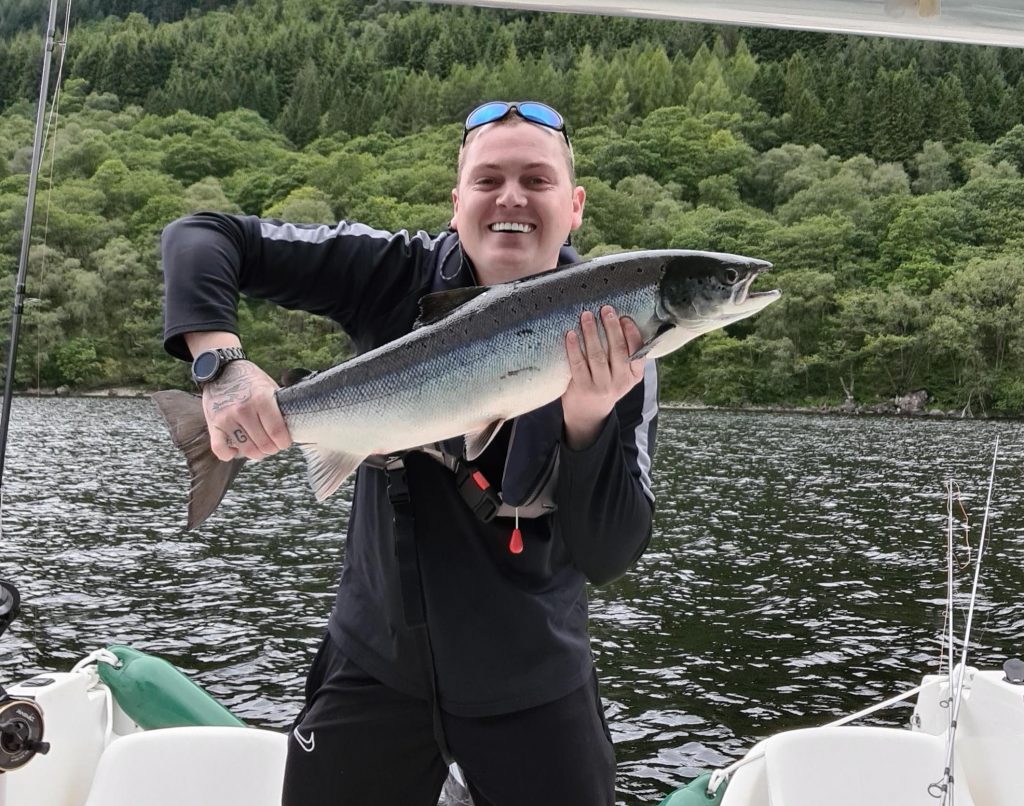 Also on Saturday 26th June VOLDAC member and experienced angler Stuart MacFarlane hit into another beautiful and strong fighting fish of around 8lb at the “Scattered Isles“. After a fiesty battle and aided by Stuart’s young daughter thankfully the fish was successfully netted, revived and returned. Congratulation to Stuart and his Daughter. 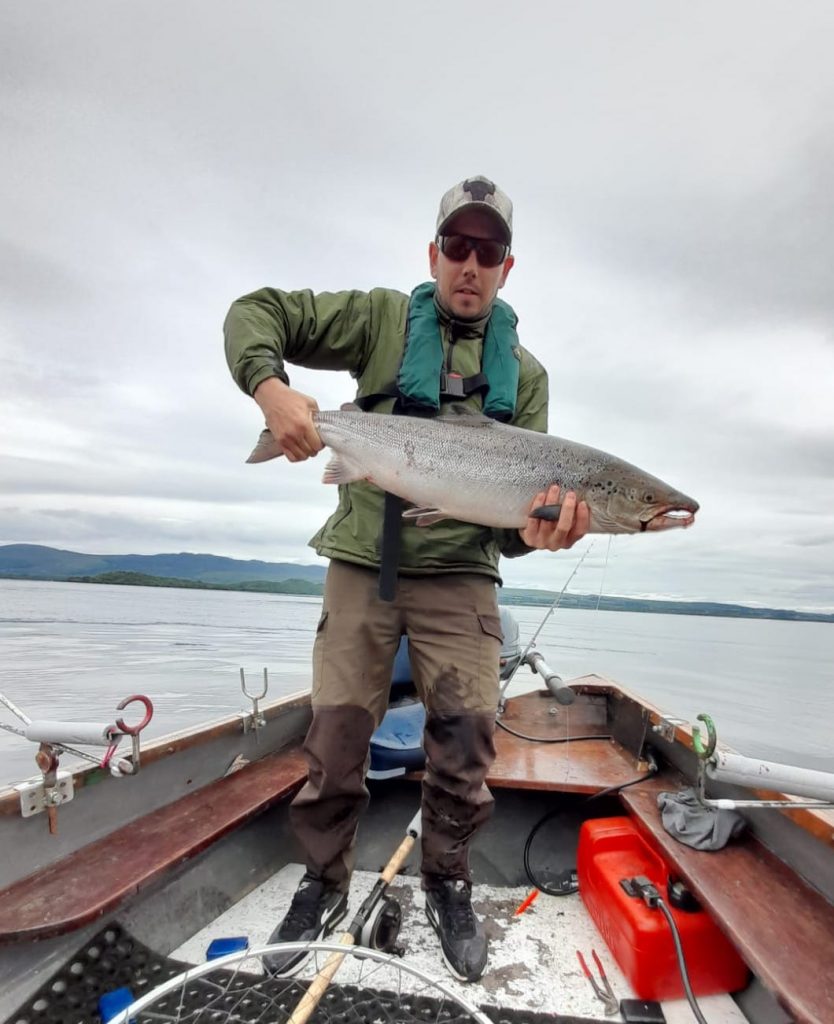 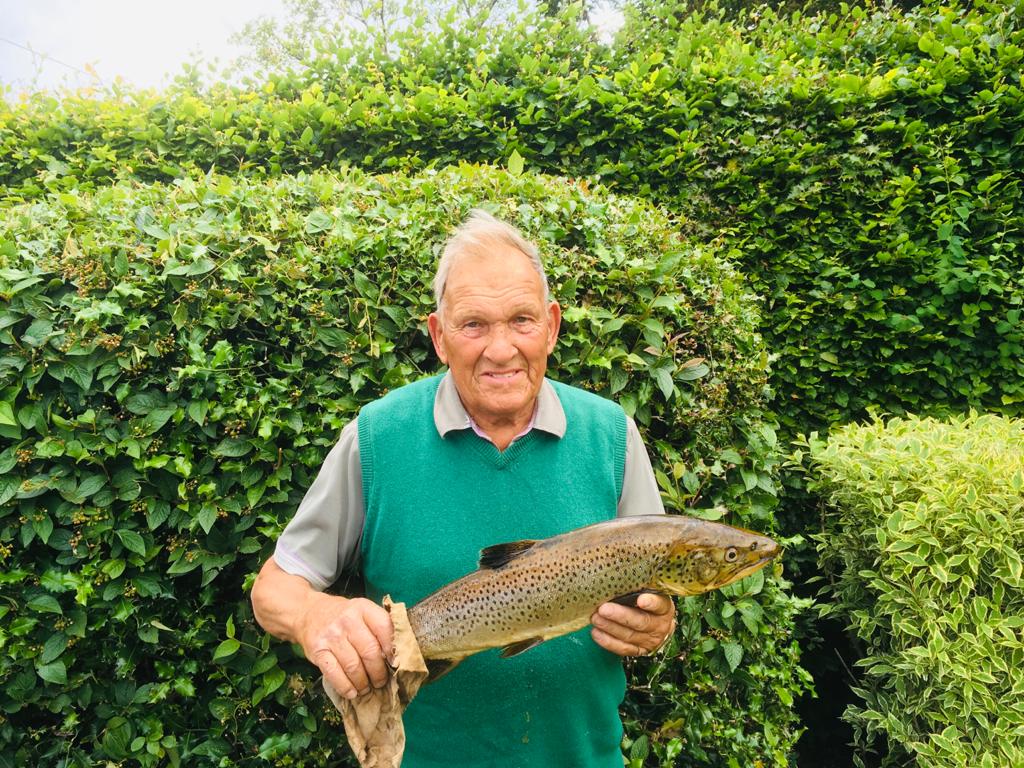 Also on the 2nd July Stuart MacFarlane continued his success in hooking and landing a lovely Salmon of 12lb in “Manse Bay“. The fish was revived and safely returned, congratulations and well done once again Stuart. 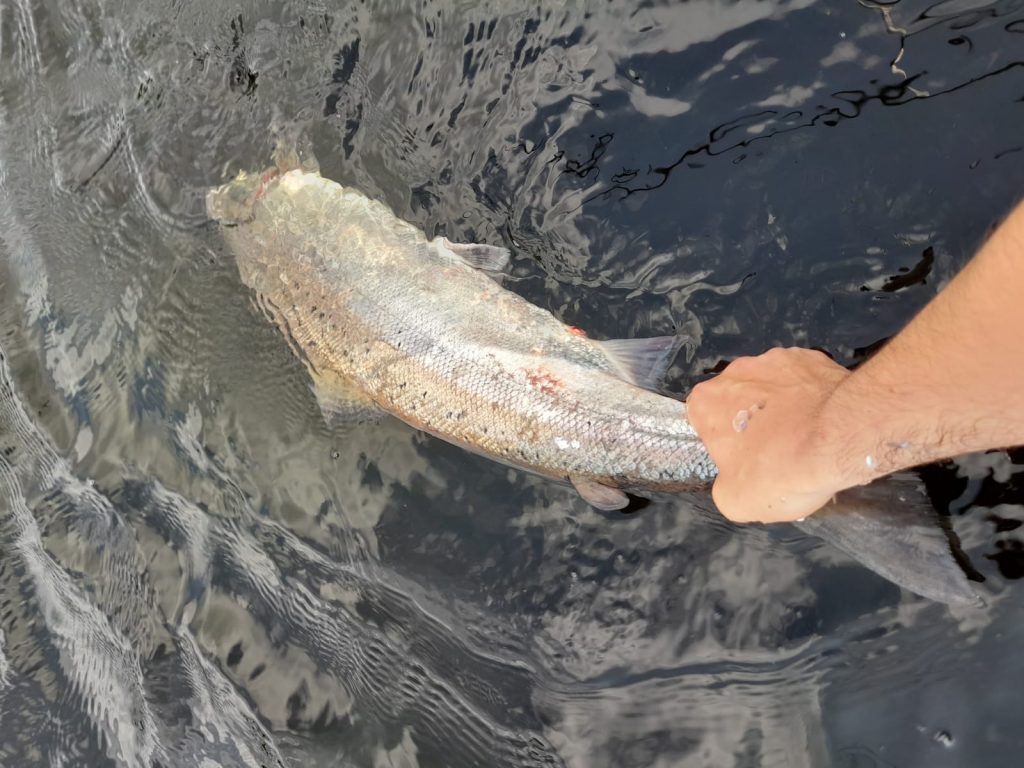 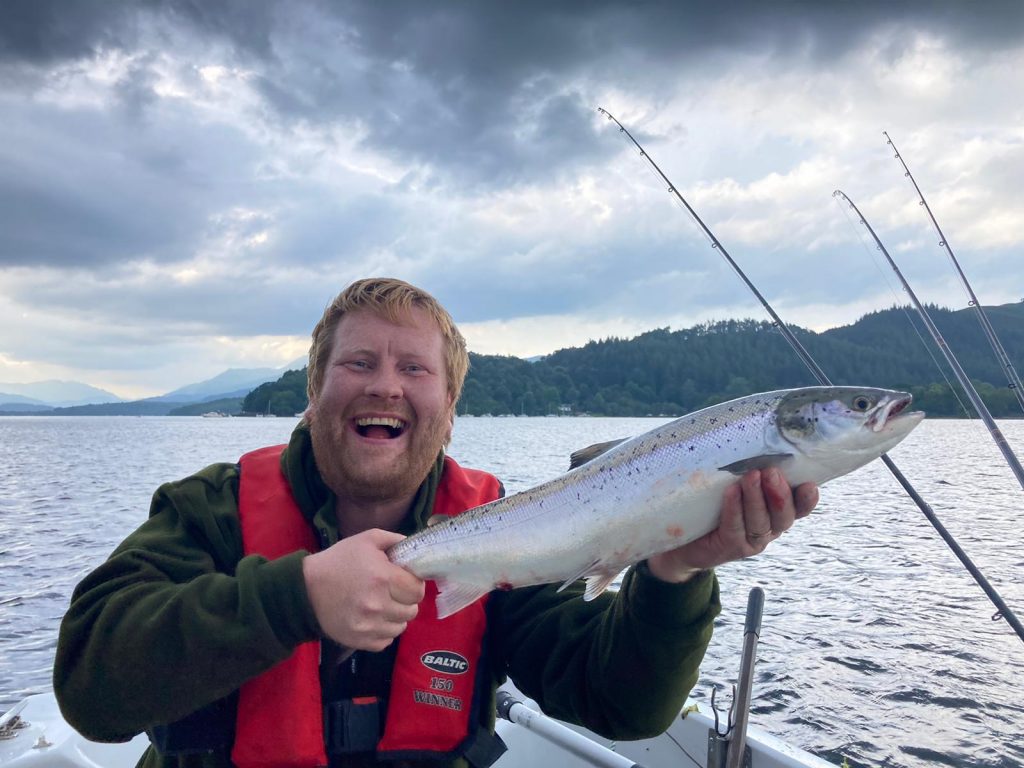 On July 3rd Robert Mair was in the news once more in landing another large Salmon of 18lb in “Achentillie Bay“, once recovered the fish was safely released . Congratulations and well done Robert. 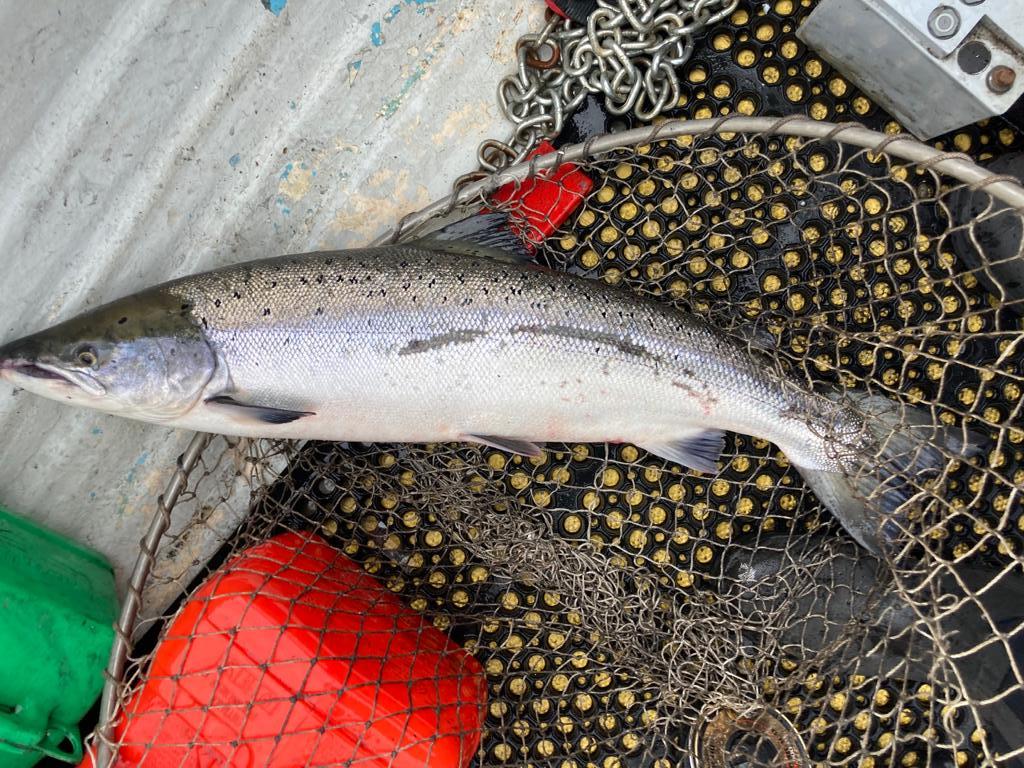 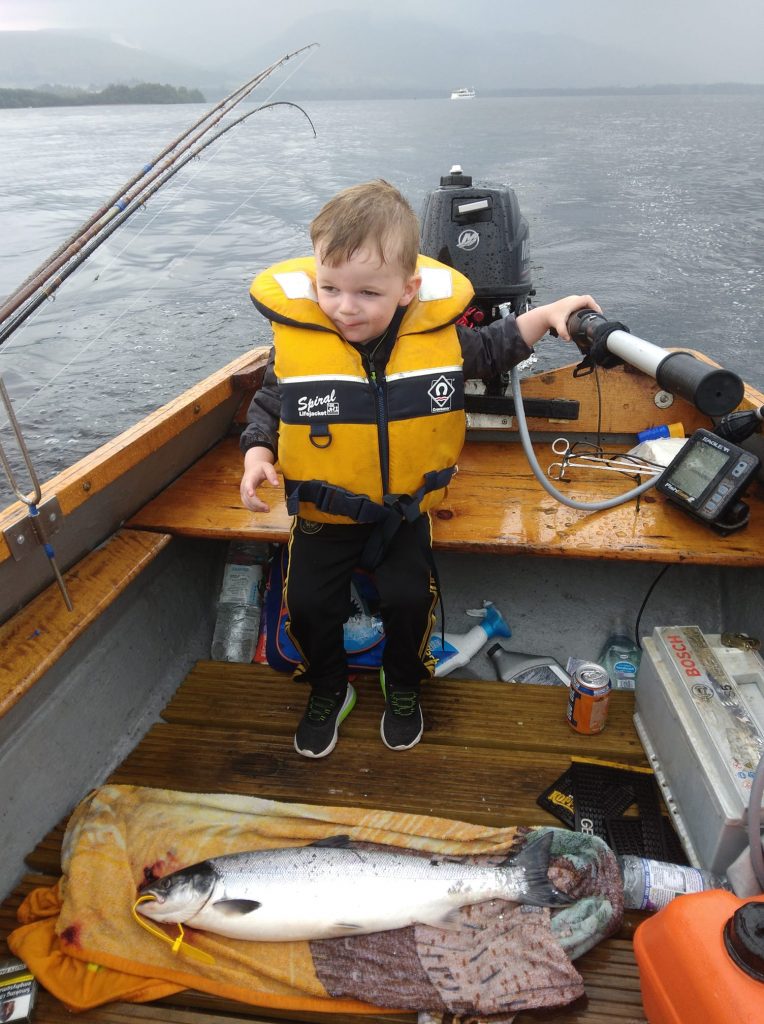 On the 5th July Stuart MacFarlane continued to show the way to do it by successfully hooking landing another nice Salmon of 11lb near the “Scattered Isles“. The fish was revived and safely returned. You are definitely on a roll Stuart, well done. 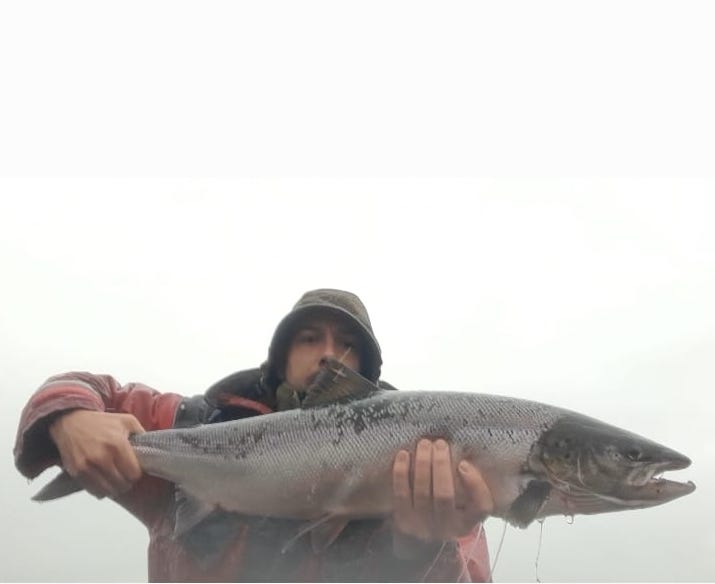 6th July and yes it’s the Stuart MacFarlane show as Stuart continues his successful run by hooking and landing a lovely Grilse of 5lb on “The Endrick Bank“. Attempts to revive and return the fish were unsuccessful. Congratulations and well done Stuart you are truly leading the way! 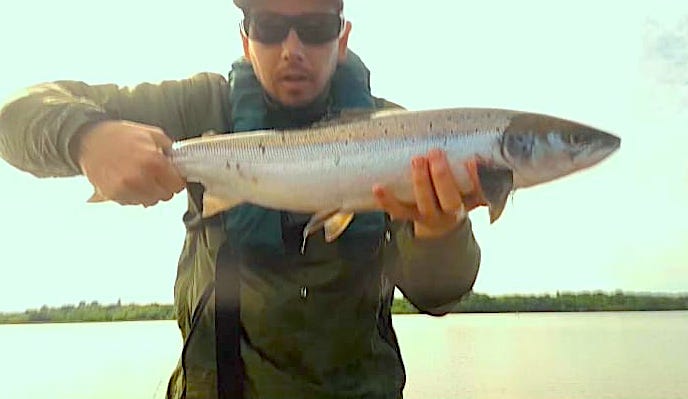 Stuart MacFarlane leads the way with a lovely Grilse 5lb

Our very own Jim Raeburn (Chairman LLAIA) got his 2021 season underway on 7th July by hooking and landing a lovely fresh Salmon of 10lb off Rowardennan. The fish was revived and safely released. Congratulations and well done Jim. 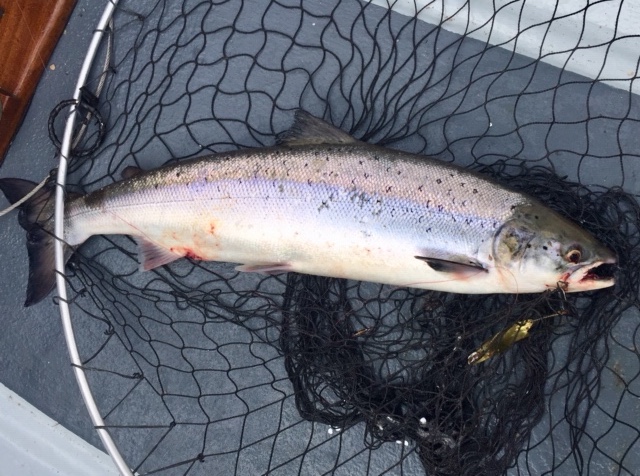 In addition to the above catches there have been numerous reports of fish hooked and unfortunately lost including the long battle between Dick Dickson and the “lomond Leviathan’ which captured the interest of so many members and anglers. If you missed Dick’s tale of this epic fight you can find it using the link here: https://www.lochlomondangling.com/news/2021/06/24/lomond-system-news-an-encounter-with-a-lomond-leviathan-dick-dickinson/

You will note from the reports above that there are many instances where “no image available” has been noted, we would encourage all anglers to share your catches, tales and images with us in order that we in turn may share with our members and readers.

No confirmed reported catches at the time of report

No confirmed reported catches at the time of report

So after a late start to the season in terms of catches and rod pressure then recent weeks have seen some great quality fish coming off the loch and in reasonable numbers. July has witnessed the first real Grilse catches of the season which hopefully will grow over coming weeks. So despite very low water conditions in the River Leven fish are clearly continuing to travel up and into the loch despite the low levels. Like many systems in Scotland we desperately need some prolonged rainfall in order to both raise heights and freshen the system. Lets hope that we get lucky in this respect soon, meantime we wish all anglers tight lines in the coming weeks and please do remember to send in your reports, tales and photos.