It is with great sadness to report that one of our best known and well liked fellow anglers Matt Stewart passed away on 4nd December after a long illness.  Matt had been a LLAIA member from the early 60s.  He gave countless hours of his time and effort over many years, at times through atrocious conditions to contribute to the advancement of our association and was also a member of the committee over many years.

Matt was a great angler, over his time he had fished out from the VOLDAC at Balloch, Aldochlay, and laterally Balmaha. His biggest sea trout being a Lomond sea trout at 15lbs Caught on the dap. He also fished the Endrick at the back end.  For many years he was out on Lomond most Saturdays with his son Alan,and for a break they invariably had a wee fire going for a brew up on Creinch.  He was always a pleasure to be in the boat with and was a lucky guy to fish with.  He had a wide experience of fishing in the north of Scotland, Western Isles and Ireland.

The following extract from historial LLAIA fishing reports typifies Matt and his love of fishing on Lomond:

“4 May 2016, regular Loch fly fishers Matt Stewart and son Alan arrived at Balmaha to find blue skies and calm conditions. Remembering how to set up trolling rods and rapalas, they set off down the Bank for a sail. It wasn’t long before they were reminded that there’s always a  method to suit conditions. A screaming reel signalled success and a 12lb springer was quickly netted, photographed and released.” 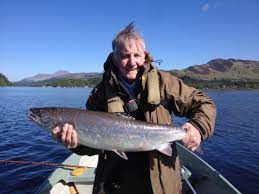 Matt doing what he loved

Matt will be remembered for many things. He was a true gentleman, family man, kind, thoughtful, smart, very funny, quick wit, his one liners could always make you smile, helpful, never had a bad word to say about anyone, and the sweets.  I could go on.

I am sure that members and readers would all wish to join us in offering our deepest condolences to his his wife Rena, son Alan and wife Lynn and granddaughters Robin and Kirsty and all of the Family at this sad and difficult time.

At this time funeral arrangements are:

Dalnottar Crematorium Clydebank on 21st December at 3:30. But these have still to be CONFIRMED!