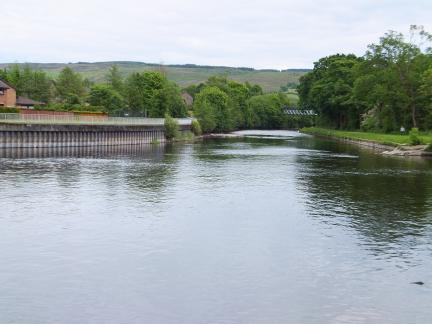 A fairly quiet week on the Leven, the spring run now over and the arrival of summer salmon and grilse runs awaited. There are however still numbers of fish entering the system. Last week an overnight bailiffing patrol spotted a small shoal of salmon, all in the 4-8lb range, moving at first light. The fish were closely monitored as they headed upstream at a fast rate of knots, even in low water conditions.

On Monday 4th June, Chic McLean had his first salmon of the year, a 12lb fish taken at Ritchie’s Lade on a black and silver flying – c, which he returned.

Wednesday 6th June saw Mark Gibson land an 8lb salmon and a 4lb salmon from the top pool. Both were taken on the worm. Interestingly, the larger of the fish was fin clipped, the first reported this season. There will be no prizes awarded to those catching fin clipped salmon, but we would like to hear about those that do come to the notice of members and ticket holders. On the same day, Neil McSporran had a 4lb fish from the Street Run. 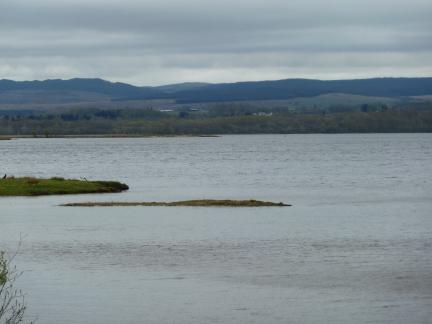 On Friday 8th June, with a strong, cold easterly wind blowing, Balmaha angler Kenny McDonald set off down the Endrick Bank. There’s been a theory going about that the Bank fishes better with an offshore wind…….  After completing a run down to Net Bay and turning about to head back up the Bank, he was left in no doubt by the screaming of his inside reel, that he was into a fish. Shortly afterwards he netted a fresh, sea liced salmon which weighed in at 8lbs. It took a ‘brown trout’ toby and had been lying in about 4 feet of water.

About 10 minutes later, just to the north side of the river mouth, his inside reel sprung to life again. After playing the fish, kneeling on the floor due to the rough conditions, a similar sized salmon was brought to the net, lure removed and the fish quickly released. Well done that man! A double to the ‘brown trout’ toby, a good pattern throughout the season.

We hear that on Saturday 9th June, Pat Millar returned to Balloch with his second salmon of the season, a fish of 12lbs taken of the south shore of Inchfad on a toby. Scott Pryce had his third fish, a 10lb salmon, at Rowchoish the same day.

On Monday 11th June, Voldac members Billy Quinn and Bobby Paterson both had fish off the Loch, Billy with a 11lb salmon which he caught in Auchentulloch Bay on a green and gold toby, while Bobby netted a 10lb fish.

Anglers out on the drift are enjoying good sport with sea trout. Glasgow University members June Donald and Craig Carr were out recently and had fish several fish over the 3lb mark.

The first phase of the Endrick clean up took place on Sunday 10th of June. Despite the rainy conditions, four pools were opened up. A large tree was removed at Cowdenmill and the main run is now clear. There were various sightings of a man in a wet suit wielding a saw assisted by another man in a rubber dinghy. 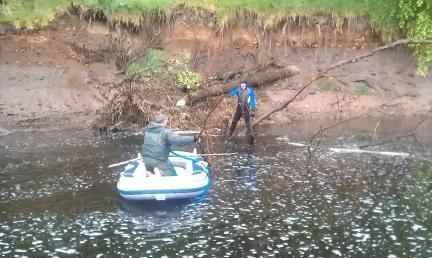 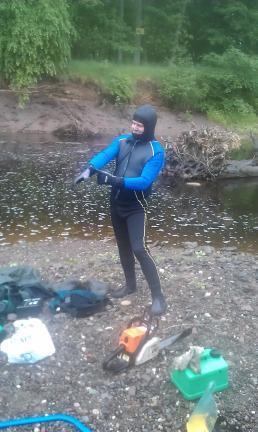 There have been no reports of sea trout in the River Endrick, but Chris Turner and Colin Ferguson have had some good sport with yellow bellied browns up to 2lb.

The River Fruin clean up continued on Sunday and the with the removal of a very large tree. 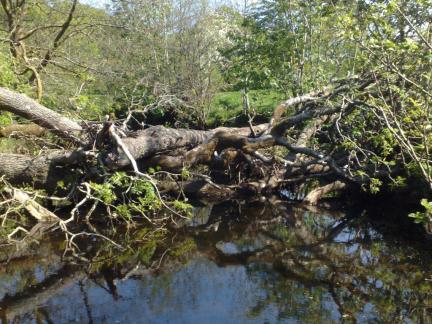 Another example of a great team effort……… 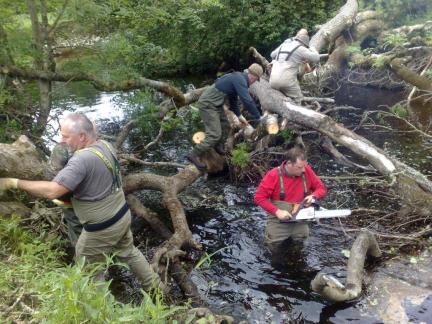 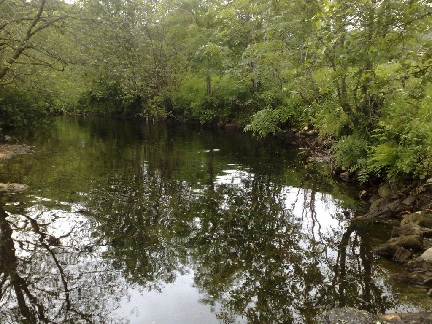 Still too early in the season to expect any runs of fish, but the Fruin is certainly looking good.

Friday 15th June is the last day of the Volutary Catch and Return initiative. We’d like to thank Mr Paul Devlin of Glasgow Angling Centre for his interest and support. We hope that this partnership may be extended in future projects.

Since the scheme went live, we are aware of four salmon having been returned by anglers. One on the River Endrick, two on the River Leven and one on Loch Lomond. Not great numbers, but it is encouraging to know that some anglers are prepared to make a choice, even without any inducement.

We will continue to post photos of anglers with their catch, but would still prefer them to be of fish being released. Try it………