A number of good sized summer salmon and grilse taken over the past week. Frank McGeachie(16.5lbs) cherry red devon at the Stuckie Bridge. Brian Stewart(14lbs) at the Flowers on the worm. Colin Smith had a good fish on the fly at the Glebe which he played for over 20 minutes before it released itself. He reckoned that it would have been his biggest.

Alun Price(10lbs) from the Double Pipes on a flying-c and Euan Slowik with two grilse of 4lbs and 6lbs from the Top Pool and the Stuckie. Both fish were taken on a cherry red devon. 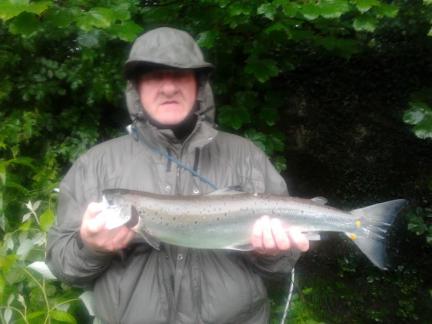 Brian Ward was out early this morning. At 6.30am he was the only angler on the river. In torrential rain he got his reward of a 5lb grilse. ‘Like fishing a six mile private beat’ he commented. 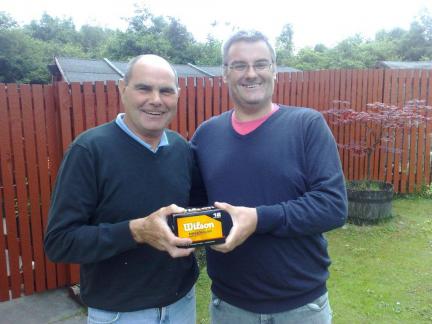 Back in May, Leven regular Chic McLean (left) returned his first salmon of the season but didn’t wish to claim any ‘reward’. As a token of the committee’s appreciation Chic was presented with a box of personalised golf balls by Leven rep Keith Adams. There’ll be a few more fish in the river with Chic’s name on them!

Friday 13th of July wasn’t unlucky for Jim Raeburn (author). More like third time lucky having lost two fish earlier in the month. An evening patrol of the shorelines at the top end just before 9pm resulted in a 7lb grilse at Rowchoish, which stayed on…… 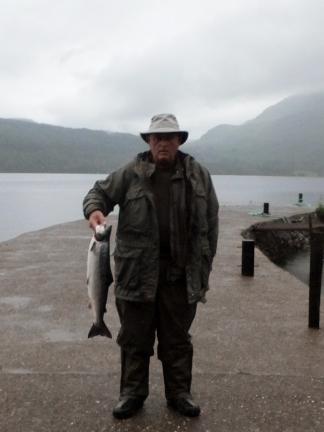 It can be worth staying out that bit later at this time of year, early morning and late evening always have an air of expectancy. The brown trout toby proved effective once again.

Alan and Bert Brunnstrom were out from Balmaha on Saturday 14th July. During the course of the day their travels took them down the Endrick Bank into Net Bay where Bert landed a 6lb grilse. 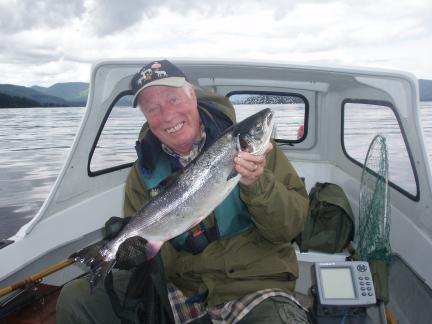 Says Alan… ‘ We actually saw the fish turn in Net Bay and as we passed by in about six feet of water counted the seconds hoping it would take one of our lures, which it did. A copper/brown toby on the inside rod.’

On Tuesday 17th July, Voldac member Alan Cole headed out on the troll for what was to be a productive day. 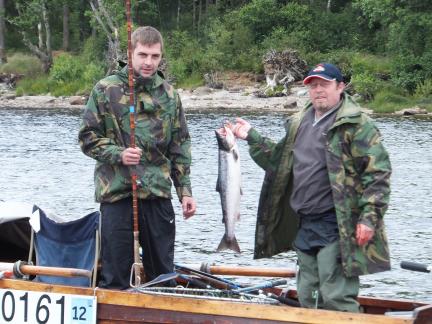 This fresh grilse fell to a blue and silver toby off Sallochy, on the east side of the Loch.

Robert Wilson had a good day on Friday 13th. He mailed us ….‘I’d just like to report that I was out fishing the Loch on Friday and had a trout of around 8lbs. I didn’t weigh the fish as we just wanted to get it back into the water.It has some of the best markings I’ve ever seen on a trout. Also two pike and a perch which were in perfect condition. The bailiffs stopped and checked our permits, which is the first time on the Loch. It’s good to see them about.’ 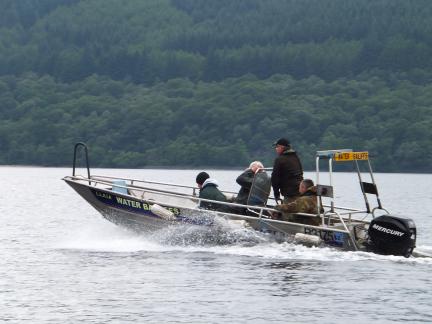 Many of our members will have noticed that bailiff patrols on the Loch have increased, with a presence on week days and at weekends. Colin McFadyen has joined us as a full time member of staff. He brings with him a wealth of skills and experience which he will put to good use on the system. We wish him all the best in his new position.

Endrick anglers Colin Ferguson and Chris Turner are having a good season. The amount of rainwater recently has helped their sport to no end. 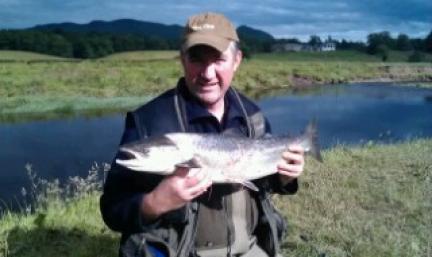 On Thursday 12th July, Colin arrived at the Barns Ford Bridge pool about 5pm. Fifteen minutes later, and assisted by Chris Turner, he had this 10lb salmon on the bank. He and Chris covered several other fish, Chris getting really frustrated with one fish having at least six goes at the fly without hooking up. 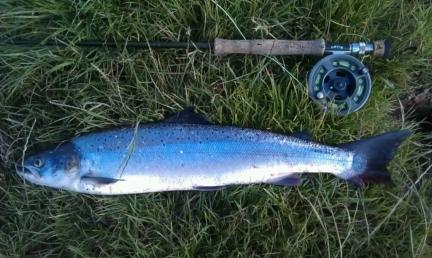 Then on Monday 16th July, with bright sunshine and fairly low water, Colin returned to Barns Ford Bridge and landed this 4lb grilse. 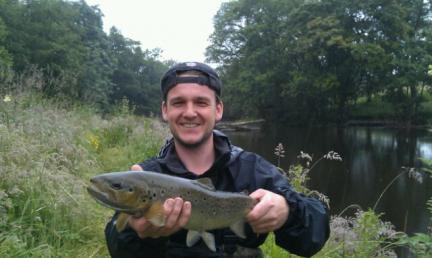 The following evening, Tuesday 17th July, back on the Endrick. This time no salmon but Chris Turner had sport with this 3lb sea trout which was landed and returned.