The closing days of the 2012 season saw several good salmon landed and returned.

On 23rd October Chic McLean had two fish (20lb) at the Bucks and (6lb) at the Street Run. We reckon that this must be Chic’s 15th fish of the season and all returned. Keith Adams had two salmon the same day (9lb) and (6lb). Davy Watt (5lb) and Alister Kane (15lb), all returned. 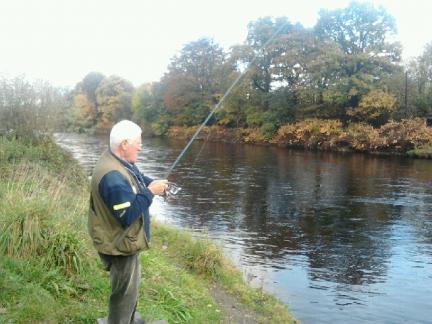 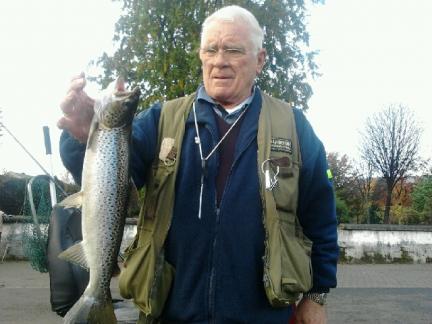 There were at least 14 similar fish landed on the river at the weekend, many of them returned.

Keith Adams and Andy McIlwee were among a number of anglers that turned out on the river yestereday to see out the season.  Keith’s efforts landed him a (10lb) salmon and two sea trout (2-3lb) at Stuckie Bridge and Andy a (4lb) grilse. All returned.

Brian Stewart, has been a regular day ticket angler on the Leven this season. On the last day, he had his seventh salmon (6lb) at Stuckie Bridge on a small cascade fly. 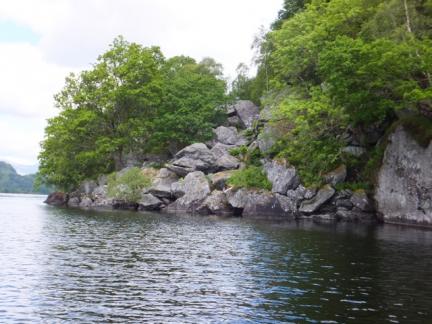 Last Thursday (25th) Jimmy Malloch, one of the ‘Tap End’s regulars, took a fresh (9lb) salmon on the troll up at Rob Roy’s Cave. There’s always been some debate about how far ‘late run’ fish will travel up the loch….far enough and never too late. 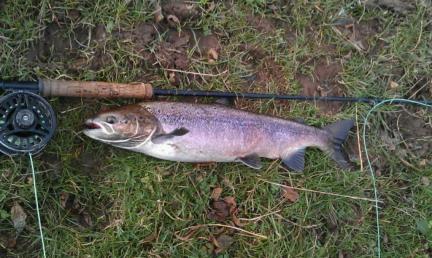 Chris Turner took a wander up the Endrick on Saturday and despite low water conditions managed to interest this (4lb) grilse, which he returned. Heavy rain on Sunday brought the river back up to a good height for Monday morning anglers. Malcolm MacCormick took full advantage, landing two fish and losing two, while another member apparently netted and returned four. 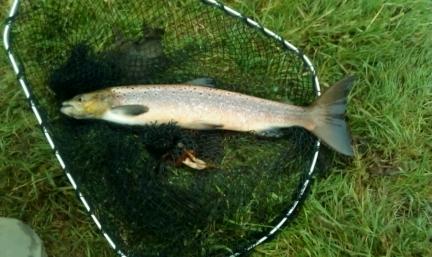 The last report that we received this season was from Colin Ferguson, who on the final day had his first (3lb) grilse from the Fruin at the Footbridge Flat pool in big water. 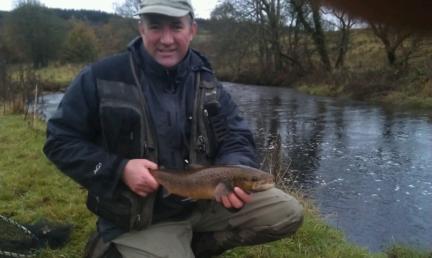 Colin tells us that he had set out originally to fish the Endrick and was disappointed when he checked the webcam to find it in spate. He headed round towards the Leven but decided to check out the Fruin first. For Colin it was a nice end to a good season.

How was Season 2012 on the Lomond System?  The ‘Lennox Angler’ summarizes it as follows…

The first reported spring salmon from the system came to the fly during the Easter holiday at Stuckie Bridge, ending weeks of expectation and speculation. A few reports of springers followed but it wasn’t until mid May that the season began to really get under way. The top end of the river, particularly at Chapel Hole and Double Pipes, began to produce salmon in the 12lb class with reports of much heavier fish lost. This coincided with the River Leven Clean Up, probably the most systematic to be carried out in many years.

At the end of May, with bright conditions and low water, catches began to slacken. It wasn’t long before there was ‘Divine intervention’ and ‘the wettest summer in 100 years arrived.’ By the third week in June the Leven was in top form with excellent catches of summer salmon ranging between 12lb – 18lbs. In mid July, the grilse arrived to swell the numbers. The top end of the river continued to fish very well, good numbers of fish up to 21lbs being caught. Fresh sea trout to 4lbs have been present in the river throughout the season.

To date, the Leven has remained in good condition for all methods. Overall, members and ticket holders have enjoyed good sport this year with several angler’s catch returns into double figures.

Early in the season sea trout to 10lbs were caught on the troll and released. Over the holiday weekend at the beginning of May the first spring salmon, ranging between 9lb – 12lb, were boated at Boturich, Milarrochy and Auchentullich…..the Lomond system always seems to fish better on public holidays! As the month progressed there was an increase in activity. A 20lb springer was taken at the Boathouse and numerous fresh fish caught on the Endrick Bank. In one particular afternoon, six fish all about 10lbs were landed. .

The Queen’s Diamond Jubillee at the start of June was marked with an 11lb springer off the Loch at Carraig Rock on the troll and a fly caught sea trout of 6lbs at Inchmoan.

Good sport continued on the Loch throughout June until mid July. Summer salmon to 12lbs caught on the troll and fly. Then the monsoon conditions arrived and the level of the Loch rose. Any salmon now entering the Loch didn’t stray far from the bottom end……..much to the frustration of those boatmen who favour the ‘Tap End’. Few boats found fish north of Rowchoish this season.

The good news that grilse had arrived in the system turned to despair as the rain continued and conditions encouraged them to head to where ever nature takes them.

The season continued, with the occasional summer salmon to 20lbs netted, but very few reports of grilse. The river angler preys for rain…but it just fills up the Loch man’s boat!

The unseasonal rainfall was a bonus for Endrick anglers. The river ‘opened for business’ during the second week of July with grilse showing in numbers at Barns Ford. By the end of the month it was populated with fresh sea liced fish as far up as Coolies Lynn.

Like any spate river it’s all about timing and those anglers who can manage to get it right have enjoyed excellent sport. Fish to 15lb have come to the fly, one angler landing eight fish in a week, while another netted six in a day and lost eight!

The recently installed webcam sited at Potts of Gartness has proved very popular. It’s an invaluable tool for any member planning a day on the river.

It has become very obvious over the season that many of our members and ticket holders have supported the policy of catch and release. We would like to thank you on behalf of the LLAIA for making these personal contributions towards the future of our fishery.

We hope that over the season the Reports section has been able to give you a flavour of fishing on the Lomond System. Of course we can only publish what we know about, so a big thanks goes out to those of you who have been prepared to share their season with us. A special mention and thanks to our bailiffs Bryan and Colin, not only for their hard work on the system. Their regular updates and photographs have been invaluable when preparing these bulletins.