July’s dry, hot weather had the expected effect on the Lomond system with very few salmon coming to the net. The river’s level stayed at summer low for some time and even the weekend compensation flow didn’t make much impression. At the beginning of the month a few grilse were reported but catches quickly tailed off. Some fish were seen in the pools but as many regulars know, Leven grilse will run the river’s six miles to the sanctity of the Loch very quickly. Even though there’s only a few inches of water, they won’ t be held back. Morning and late evening anglers had the best chance in these conditions. Early on 26th July, a fresh 15lb summer salmon was landed at the Linnbrane Hole and on 30th Davy Watt (7lb) at Stuckie Bridge, returned. July ended quietly.

On 1st of August, the heavens opened and injected much needed cold, fresh water into the system. 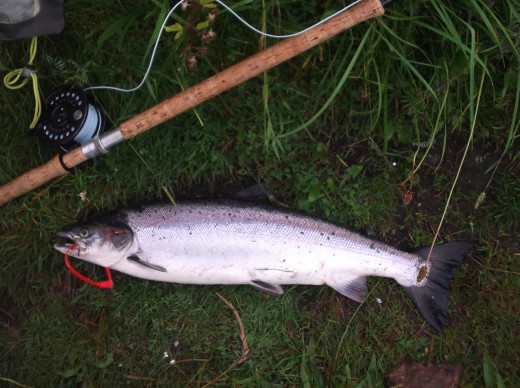 By Saturday 3rd August grilse were running the river in good numbers. Opening the scoring was chairman Malcolm MacCormick (6.5lbs) at the Washhouse Pool on the fly. Malky also landed several fresh sea trout to 2.5lbs. 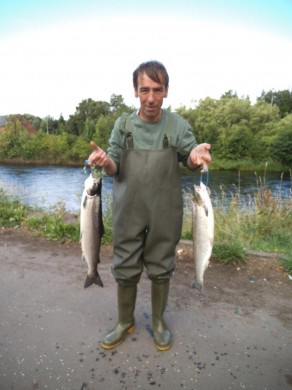 David Darling landed this brace of grilse (5lb&6lb) at the Bonhill Bridge Pool and Brian McCaskey(5lb)at the Glebe. Two anglers landed fish (5lb and 10lb) also at the Glebe. Unfortunately the rain didn’t last long and the gates were closed on Monday morning. Hopefully there’s more to come soon.

Most Lomond boatmen report that the only things caught during July were the sun’s rays…..  Normally at this time the Tap End of the Loch begins to produce good catches of grilse and summer salmon, but recent expeditions have come back blank. 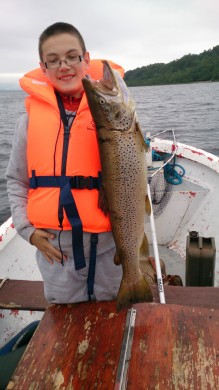 This 18lb ferox was taken on the troll off Inchmurrin by Amanda Jenkinson. Her nephew David seems quite impressed.  Most loch boatmen tend to stick to the shallow shores in search of salmon, so ferox trout aren’t often caught. However, enthusiasts are having surprising results.

While anglers on the Leven were enjoying sport, 3rd August was also a better day on the Loch for some boatmen. At least three fish were taken into Balloch. Scott Pryce (11.5lb), John Currie (6lb) and Davy King (6.5lb). Balmaha angler Alan Brunnstrom had sport (6.5lb) taken on a silver/copper toby at the Long Point.

The Loch’s still at a good level. With fresh water and surface temperature dropping it won’t be long before sport improves for the fly and troll. Over the past few years August has become the ‘grilse month’ and this year looks like following suit.

Both rivers need a reasonable spate to get fish moving up from the Loch. The Endrick webcam was introduced last season and proved to be very popular. It’s up and running again at the Potts of Gartness, giving a good view of water conditions and can be visited on this site.  A similar webcam on the Fruin will be operational shortly. 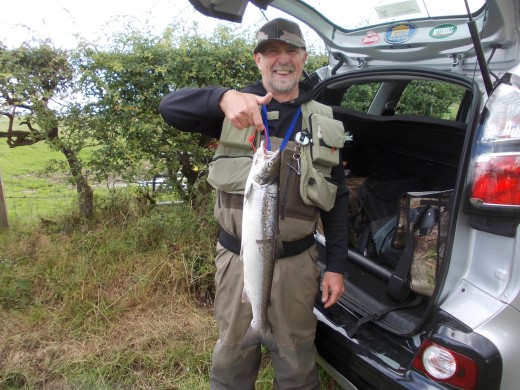 The heavy rain gave Endrick anglers some hope. At one point it looked as though it was about to burst it’s banks at Drymen Bridge, but quickly dropped off again. Robert McKinlay reports landing a 5lb grilse (above) and losing two. Plenty of fish showing but they only seemed to have one thing in mind……..running the Potts.