After our last report it was expected that the the weather would change, gates close and the system descend into the same period of drought we have experienced over the past few years. Not so! The completely unseasonal weather recently has brought about what can only be described as a ‘spring sport bonanza’ for our members and ticket holders. Some have described it as the best fishing on the system for years. Most catches have been made at the top end of the river with Stuckie Bridge, Double Pipes, Top Pool and of course the Bonhill Bridge Pool all featuring. Our bailiff team reckon that at least eighty fish have been landed on the Lomond system during the last three weeks. Many of which, thankfully, have been returned. These spring salmon have been in excellent condition with the majority weighing into double figures. 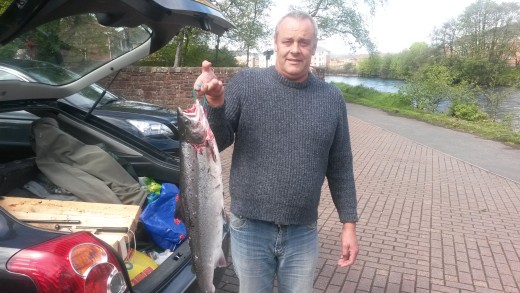 !8th May, Stuart Brown (above) with his first salmon of the year (9lbs) at the Chapel Hole on the worm. Brian Sutherland (13lbs) at Managers also on the worm. 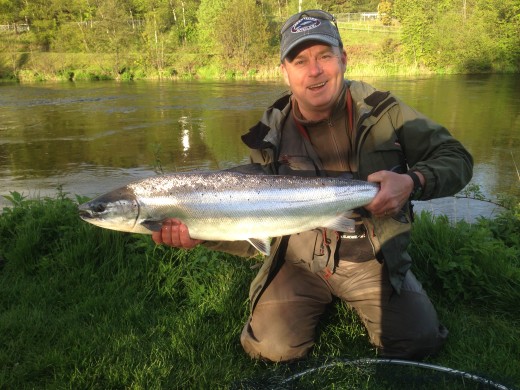 19th May, Derek Hughes successfully lands his fourth springer of the season (17lbs) on the fly at the Bonhill Pool and what a beauty! It was carefully returned to the river. Four spring fish, all released. Derek you’re a true sportsman! 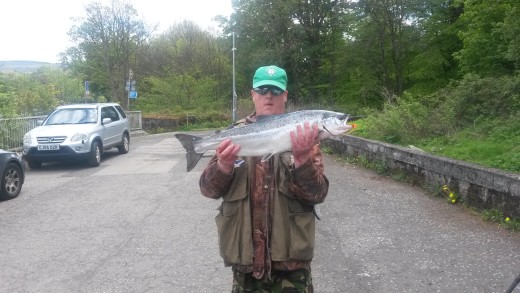 20th May, Andy McPherson (10lbs) at the Stuckie Bridge (above) on a flying-c. On the same date, Andy Patrick (14lbs) at Bonhill Pool on the fly. 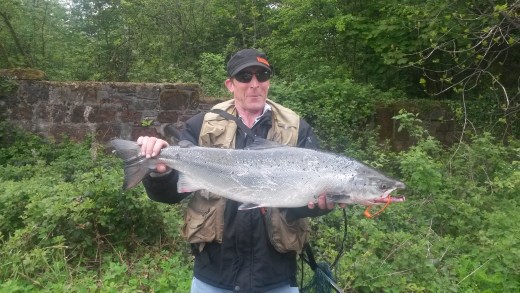 21st May, Frank McGeachie (14lbs) at the Double Pipes (above) and Alex McElwee (12lbs) at Stuckie Bridge. 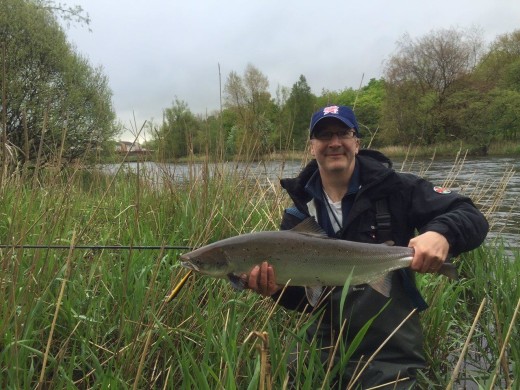 22nd May, Jim Muir (above) and Keith Adams were out fishing together at the Street Run when they simultaneously hooked fish. Both  fourteen pound salmon were landed and returned. Good effort guys! 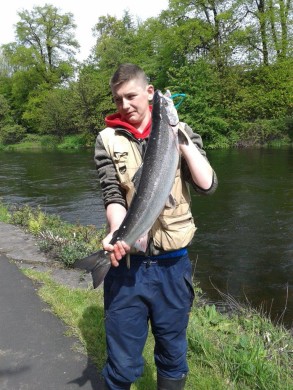 Also on 22nd May, John Smith (10lbs)at the Double Pipes on a flying-c. 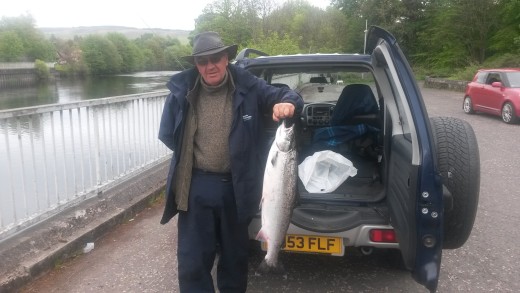 and Stuart Madden (15lbs) at the Top Pool on the worm. 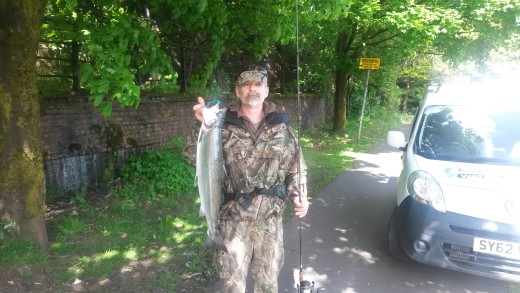 25th May, Jim McDonald (10lbs) at the Chestnut Tree on a black flying-c. 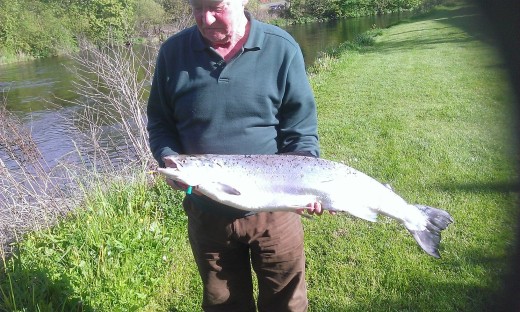 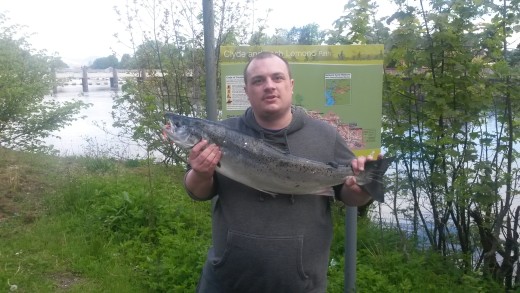 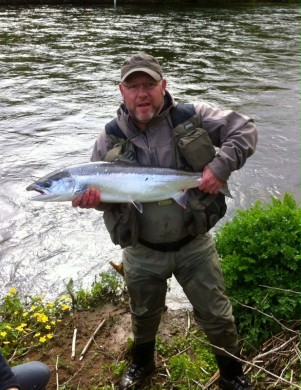 29th May, Stevie Blackwood (13lbs) on the fly at the Bonhill Pool. Stevie had only been on the water for ten minutes when he hooked into the fish. It appeared to be just in off the tide and after a great fight returned to the river. 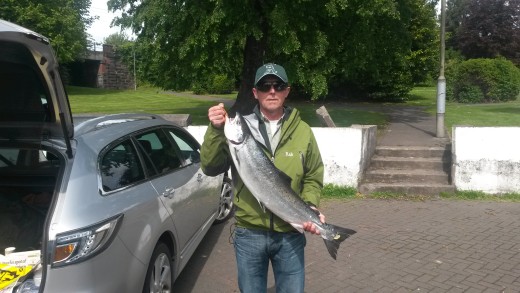 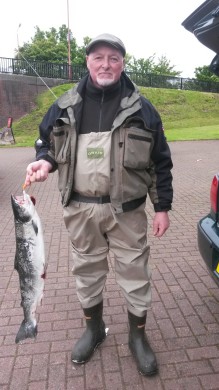 On the same date, John Donnelly (12lbs) on the fly at the Double Pipes. This fish had sustained considerable seal damage.

The month of May closed on a high note which continued into June. 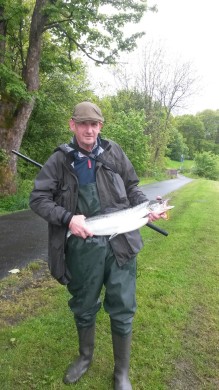 1st June, Harry Jackson (10lbs) at the double Pipes on a flying-c. 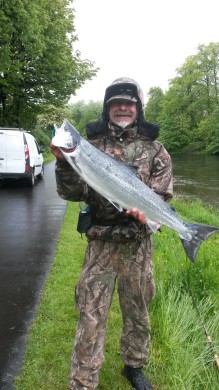 Jim McDonald (12lbs) at the Stuckie Bridge on a flying-c. 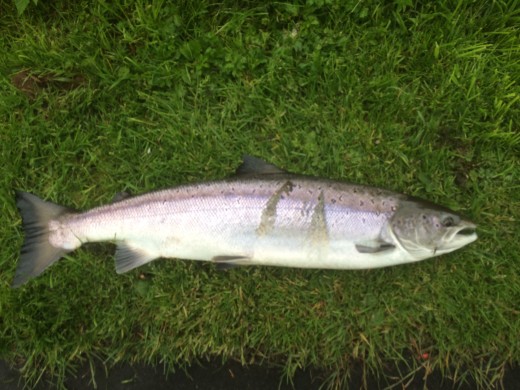 and on the same date, Stuart Campbell (12lbs) at the Factory Wall on the fly. After a quick photo this fish was returned. 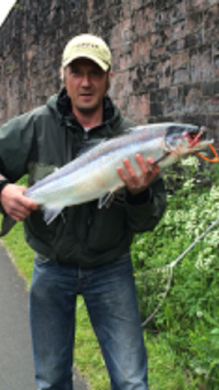 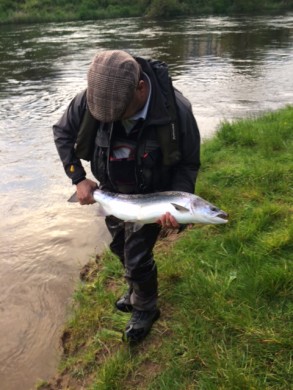 4th June, Angus Soutter (12lbs) below Polaroid Bridge on the fly. Returned after a quick photo.

also, Andy McElwee (14lbs) at the Top Pool on the worm. Paul Fieldman (11lbs) at the Stuckie Bridge. 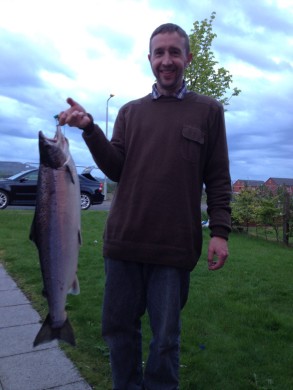 5th June, the most recent report, Kirk Philips (13lbs) at Dalquhurn Lade on the worm.

How long will this run last? With drier conditions forecast for the coming week the Loch level will fall quickly but there’s probably enough water (8.22 metres) to give a flow till the weekend. So it’s looking good for at least another week of  sport.

Lost Fly Box – Ancell Swan reports that on 27th May, while fishing at the left hand riverbank downstream of the church at the Glebe, he lost a black plastic box containing flies. Would any finder please contact us or return it to Ancell.

With good runs of fish on the Leven it’s always expected that many will make it to the relatively safe sanctuary of the Loch. This has certainly been the case with boatmen enjoying good sport, some landing two fish on the same day. 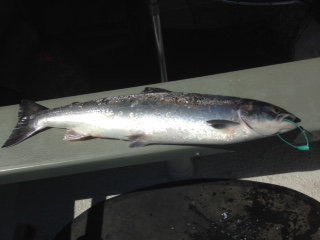 20th May, Gerd Elsweiler (10lbs) lands his first fish of the season in Manse Bay on a black/gold rapala. 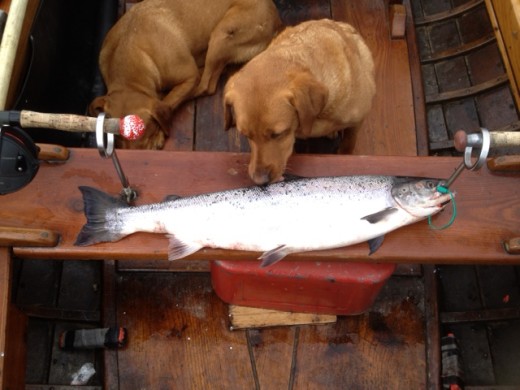 25th May, Bob Forshaw (10lbs) also from Manse Bay on a rapala. Bob tells us that he landed two pike, both 20lb+ from the same area. 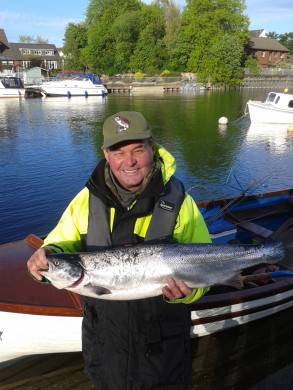 Also on 25th May, Loch regular Rab Strachan (12lbs) landed his second fish of the year at the same place as his first, the Boy Scout Camp Hole. 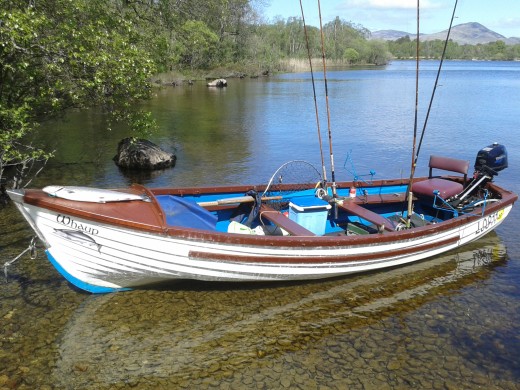 The Boturich shoreline always holds fish, but isn’t the easiest area to fish. Seasoned boatmen like Rab know their way about down there, but it’s not a part of the loch for the feint of heart with many large boulders lurking under the surface and sudden shallows to navigate round. No substitute for experience! 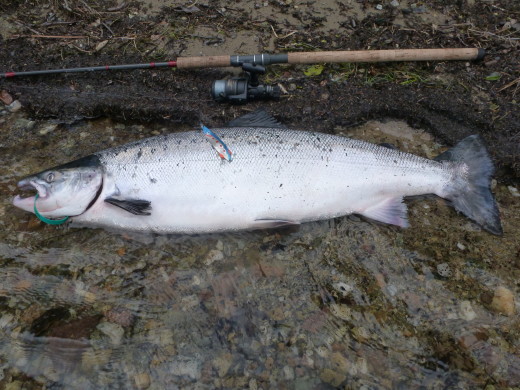 ‘Hi, thought you might be interested in a trip I had out alone on
the Loch on Friday 29th May. Was the usual cold, blustery day with
the odd sunny spell, so furry winter hat and survival jacket was the
order of the day yet again !

Was just off the pumping station when the Toby on the poker went
and after a hard battle I landed a cock salmon of 17lb 12oz (35″ from
nose to fork in tail ) which I was delighted with as it was a personal
best (by 2lbs ) salmon from the Lomond system in 30 odd years of
fishing it. I was determined to return the fish and even strapped a cheap
phone style video camera ( not quite a go-pro lol. ) to my head to
hopefully film it returning to the depths. Sadly, despite all my efforts
over 15 mins., which I captured on the video, the fish would not recover
and had to be retained.’ 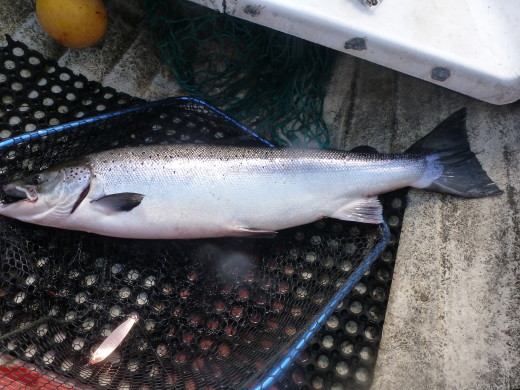 ‘Didn`t have to wait another 30 years though to better it as
3 hours later off Strathcashel I got another take on a toby again and
this one was another cock fish which I weighed in the net ( with all
necessary adjustments for the wet net weight) at 20lbs. This time
and I must admit with great difficulty on a stormy loch, over deep
water,I managed to release this large fish successfully. The picture
doesn`t really do it justice as the net looks large at the top as it is
standing vertically towards the camera but the bottom arm which
the fish is lying over is 24″ wide which gives a better idea of the
length of the fish.’

Well done Robert….! If only we could all have days like that!!

The latest news we have is of Scott Pryce returning to Balloch on 5th June with two (10lbs+) fish aboard.

To date there have been no reports of fish caught beyond the Ross Isles, but it won’t be long before the main run disperses. Interesting to hear that Manse Bay was producing. This certainly used to be a good early season mark and along with Carraig Rock and Strathcashel always held fish. Doesn’t seem to be much happening on the Endrick Bank, but with the recent windy conditions it’ll be well churned up. Should be worthy of attention once it clears.

No news from the Endrick yet, but we expect some early run fish to appear shortly. The bailiffs are giving the river extra attention and will report back on any sightings.

Overall it’s been a good few weeks of sport and great to see so many quality spring fish in the system. What is really heartening is the fact many anglers are returning fish to the system. As we well know, the very existence of spring fish is under threat and we can expect further conservation measures from the Scottish Government.

If we can at least demonstrate that we don’t kill every fish and return a high percentage, it may make the difference between measures being enforced and our freedom of choice. To hear that some anglers are releasing every fish is tremendous news. Boat anglers have also been returning spring salmon, which a few years ago was unheard of. Some river anglers ask ‘Why should we release fish back to the river only for the boatmen to chap them?’ A good point. So this is great progress.

There will probably always be those who dispatch every fish they catch almost before it’s landed. Whether this is just reflex action or a throwback to the ‘hunter- gatherer age’ is debatable. However, we did learn recently of an angler on our system who killed three spring fish, all over the 10lb mark, all in one day. Although members have five tags issued and the ‘choice’ of whether and when to use them, we must ask ourselves ‘Is this type of behavior acceptable?’ Particularly when our sport is under threat and in danger of further government regulation. Isn’t it time that we ensured that this kind of ‘slaughter’ won’t happen again?

On a lighter note, we hear that Crazy Charlie is having a ‘boner’ of a time in Cuba with double figure catches of bone fish between 3-7lbs. We hope to hear more soon….