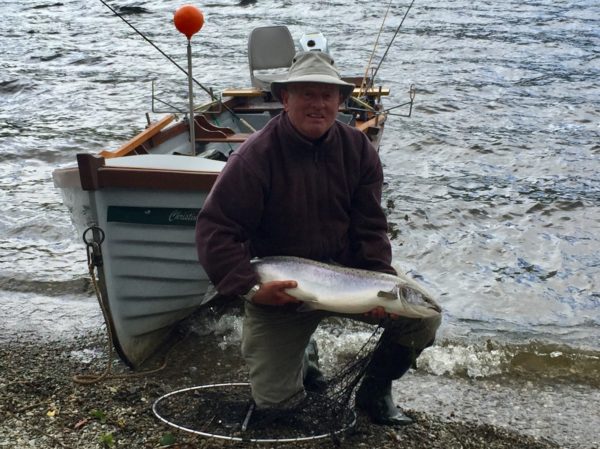 Yesterday, 21 June, was the summer solstice or longest day of the year….so the media reminded me continually. We are now officially into summer…..

Heading down to Balmaha this morning I had it on my mind….’When is a springer no longer a springer? ….Salmon caught today are summer fish even though they came into the system on Wednesday?

Arriving at the Bay I forgot about this quandary and set about getting the boat ready for another pleasant day out. No midges about and no other anglers either. The Loch’s been quiet recently with not much happening on the Bank or southern shores. Need to explore elsewhere. I set off in perfect conditions heading for the Tap End, one of my favourite places.

Still a bit cold out there in the NW wind but the radio announcer assures me next week will turn warmer again. Time to turn her off and enjoy the peace and quiet.

A fairly uneventful passage up the Loch until rounding the point at Rowchoish where a sparkling sea trout about the 2lb mark takes a dislike to my inside Toby. Quickly returned then onwards with an air of anticipation, passing Inversnaid and up to Rob Roy’s Cave, round the corner to the burn. Rowchoish to the Cave, a great stretch of water which has been very kind to me over the years….but not today.

Heading south another troot presents itself, same size as the last and again at Rowchoish. Rowardennan is soon in sight and I drift off into a state of contemplation, day dream, which is suddenly disturbed by a screaming reel…….just round the corner from the Youth Hostel at the burn mouth.

The outside rod was buckled back and as I lifted it to ensure that what ever had rattled the lure was firmly hooked, saw a silver fish leap into the air some 40 yds behind the boat. Rods in, out into deep water, net ready and  game on. If there was ever a time I could have done with a boat buddy this was it. The wind had now freshened from the NNW and I was getting tossed about like a cork and drifting fast. I was very soon aware that this was a big fish which didn’t want to play games. The fight went on for what seemed like hours but probably only about 20 minutes. It was down deep and at one point I thought it had snagged me on the bottom as I just couldn’t get it to budge….. tug o war…then it ran….round the front of the boat snagging the line on the bow ring. Cleared, then off it went again……jeez! Finally on the surface, several long runs and eventually into the net.

I had now drifted past the Hostel and was only yards away from the gravel shore to the south. Without lifting my catch into the boat I headed in slowly and beached the boat. A  lady walker who had been spectating came over. I laid the fish in the shallows still enveloped in my landing net and as I pulled the boat up heard her shout ‘Look, it’s jumped out!’ The bid for freedom was quickly cut short…. 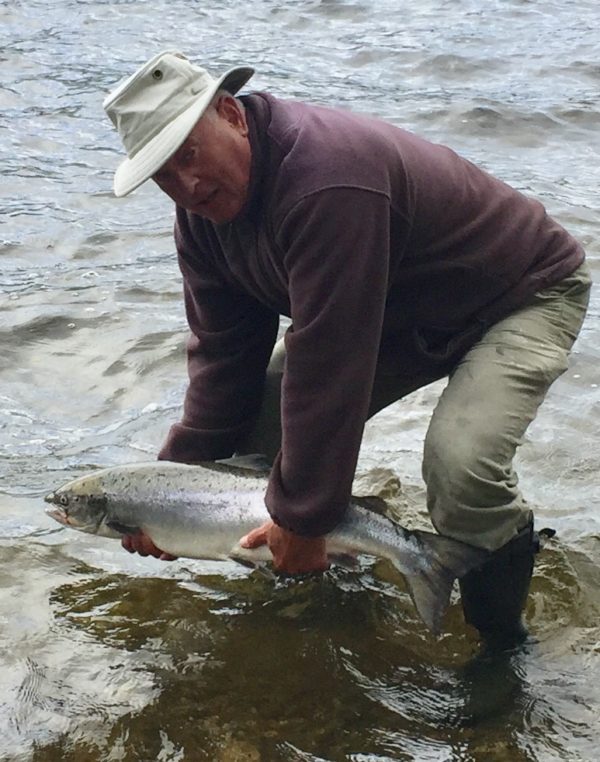 When weighed in the net the scales showed 21lbs, so 19lbs would be a fair estimate. A silver hen fish with long tailed lice present near the vent. I wondered how I could take a ‘selfie’ but the young lady kindly agreed to take a few photos.

After the fish was revived and safely returned the girl commented ‘ That is so kind, such a beautiful creature’ …. ‘Yes indeed….’ I thought to myself. 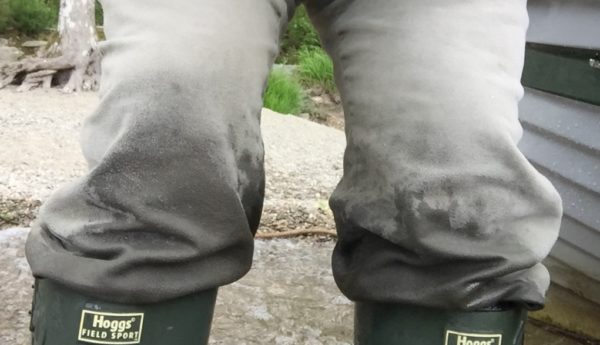 I’ve said before that I always get a warm feeling when I release a fish… usually followed by a wet one….this was no exception…up to my knees again, wellies full! (selfie this time)

Back down to Balmaha a happy lad. Never saw another boat all day, where is everyone? I reckoned that the heavy rain at the beginning of the week had encouraged fish into the system and mine was one of them……it certainly won’t be alone!

My thoughts about fresh fish heading straight up to the cooler water may be correct but I’m still stuck with the dilemma….’Springer or summer fish?’……..