After a slow start due to the drought conditions the Loch has now taken off providing some great sport. We expected that with the Loch’s low level  salmon  coming through wouldn’t hang about the southern shores for long but would instead head up the ‘tap end’ to the deeper, colder waters. Last week Balmaha regulars had some great sport with salmon and fresh grilse, even the author managed to land one…

When Bob Forshaw travels up from south of the border for a few days fishing he goes hard at it and gets some great results for his efforts. He’s had some great sport with the Loch’s sea trout this season and now it’s time to turn his attention on Lomond’s salmon… 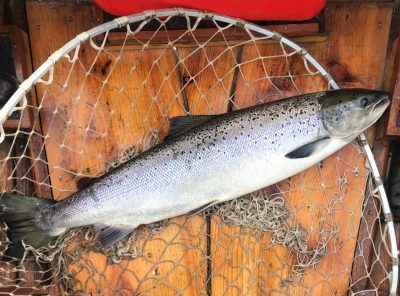 4th July: Bob headed up north for the day and before too long heard the sound of a screaming reel. His first fish of the day (13.5lbs) was welcomed aboard at Rowchoish and returned. Shortly afterwards a second fish (15lbs)  made an appearance at Culness and then a third with which he practised ‘long range catch and release’. What a day out! 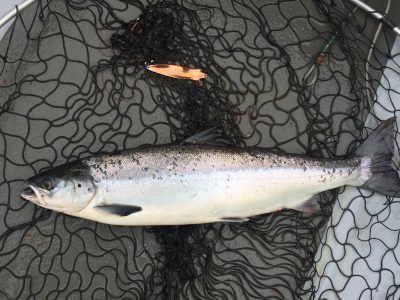 News usually gets about fast but surprisingly very few boats were seen on the Loch all week. Most of  who did venture out had fish. Grilse are most certainly about now with fresh silver sparklers taking eagerly like this one (6lbs) landed at Cashel on 5th July by the author.

In May there was a report of an unknown Balmaha angler landing and returning a (20lbs) fish off Cashel. Willie Clunes has now put his hands up and also admits to another salmon (18lbs) in mid June off Anchorage Cottage. His deadly  rapala type lure wasn’t one of the expensive brands but surprisingly came from a budget sports goods retailer. Well done Willie, great to hear of our members having success.

The story appears to be much the same at Voldac with the usual rods recording fish, but shrouded in much secrecy. …..

Definitely time to get out there….