Well we wanted water and now we have it…..too much. The river rose again this morning and with the Loch level verging on high its unlikely that we’ll experience drought condition…. Still pods of grilse going through but not many anglers on the banks, perhaps the weather is putting a few off. 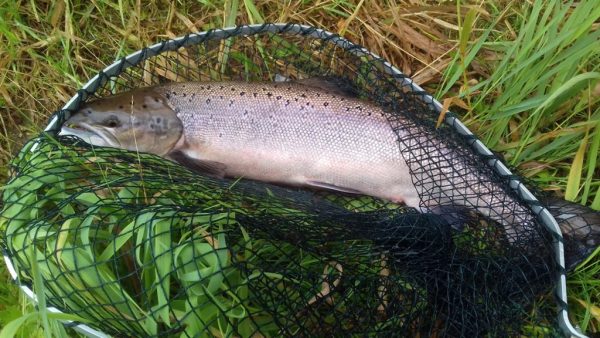 On 30 August, Colin Paterson had this nice grilse at the Bucks on an Ally’s tube. Nice way to end the month. 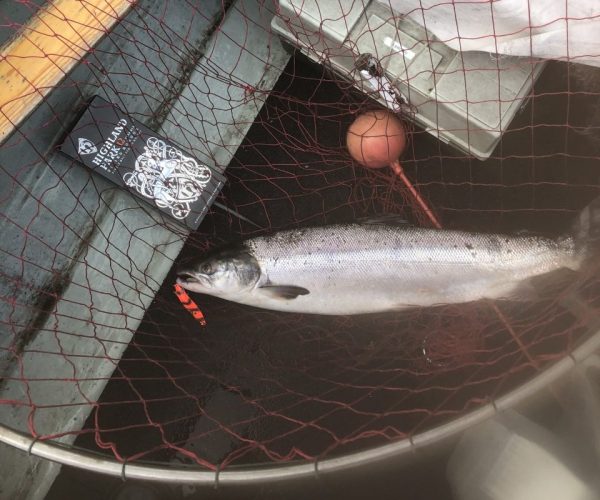 Still fish about if you can pick a weather window. 24 August; Donald Brown landed this fresh looking salmon (8lbs) up at Culness. September should be a good month for sea trout on the fly. Hopefully the numbers present in the Loch at the start of the season will return from ‘the salt’ in time for  the Loch Lomond Fly Fishing Competition on 14th September. 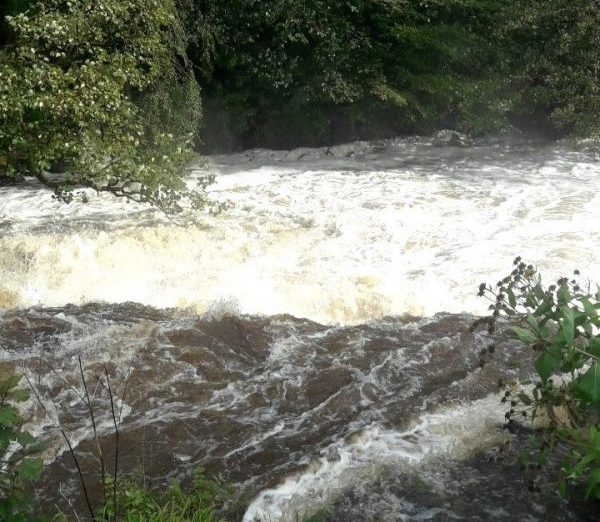 The Endrick is a spate dependent river which can rise and fall again in a matter of hours. This was the scene at Gartness on Saturday.

Over the weekend the height of the river rose to a totally unfishable 3 metres but fell again relatively quickly to a good level this morning. Timing is all  important here. Latest information is available on the SEPA Water Levels site.

Endrick regulars will be happy to know that the tress at Drumtian were removed on Wednesday. We had been waiting for a suitable opportunity to have the work carried out. Unfortunately the high bank is very unstable and its only a matter of time before we have the same problem again.

On 20th August a severe pollution incident at the Gonachen Burn at Fintry was reported to the secretary by a local resident. This is a fairly major spawning burn for the Endrick. The bailiffs attended and found that the burn was flowing with what was basically mud. The source was found to be forestry operations where there appeared to be no silt traps and water, surface debris and mud from their operations of tracked and wheeled vehicles was just going straight in the burn.

The incident was logged with SEPA who’s representatives attended the scene the following morning. Felling operations were stopped and on investigation a number of failings were found on silt trapping and run off. SEPA have given due notice and will do a full impact assessment. Once they have concluded their surveys we’ll be given a copy of their report. What was pristine gravel is now covered in a slimy silt. Many thanks to the local resident for bringing this to our attention.